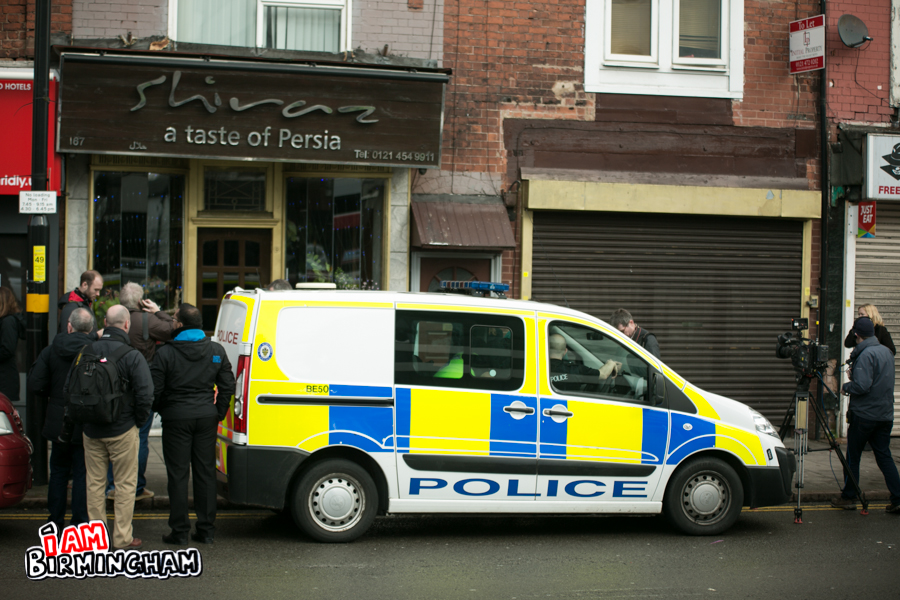 A Birmingham flat in Hagley Road was raided by anti-terrorism police last night in connection to the London attacks in Westminster yesterday, which left five dead and around 29 people injured.

Following the murder of several pedestrians and a police officer around Parliament yesterday afternoon, reports of a Birmingham connection transpired as BBC Newsnight was one of the first to suggest a connection with the city.

According to witnesses, the armed attacker ran towards Parliament with two knives, where he came face to face with police officers. The assailant then confronted an unarmed officer, stabbing and killing him. In response, the attacker was shot dead by nearby armed officers.

On high alert and as a precautionary measure, Parliament was suspended and most visitors to the buildings were locked in for about five hours.

The attacker, the victims and those in intensive care had not been initially identified.

At around 11pm last night, armed police closed off Hagley Road as a large number of officers swooped on the area. The usually busy road was then closed off until around 2am.

“Overnight our colleagues from the Metropolitan Police have searched a number of addresses across the country and have made a number of arrests in connection with the incident, including addresses in Birmingham.

“The arrests and searches were intelligence led and there was no immediate risk to public safety.

“We would like to reassure our communities that we have extra officers out on patrol throughout the next few days to offer reassurance and address any concerns you may have.

“We are keen to stress that this additional security is not based on any new or emerging intelligence.”

The Met Police have since confirmed there have been seven arrests in total across London and Birmingham, with six properties raided overnight, including the Hagley Road premises.

One of the victims of the attack was later been named by Spanish newspapers as 43-year-old mum-of-two Aysha Frade, believed to have been killed as she went to pick up her young children.

It is believed seven people remain in a critical condition and 29 have been treated in hospital.

“Greater clarity is now developing regarding the casualty figures as we have now collated information from the public and five hospitals – the latest figures I have are that there are currently four dead and 29 people were treated in hospital.

“We are still collating numbers of walking wounded and of those in hospital sadly 7 of them are in a critical condition.

“Tragically the deaths included PC Keith Palmer who was protecting Parliament, and two members of the public – a woman aged in her mid 40’s and a man aged in his mid 50s.”

“Customers are avoiding the area”
.

As investigations in Birmingham continued into the early hours, many arriving at work were shocked by the events unfolding in Hagley Road.

27 year-old sales assistant Carlie Ann-Hare works across the road from the scene of the Hagley Road incident. She was told by her boss to be “careful” when coming in this morning.

“I woke up to a text from my manager saying the flat opposite my work had been raided and to be careful walking to work. I wasn’t sure what to expect when I got here.

“Hagley Road has currently got two police vans and one car patrolling the area. ITV News and Sky News are parked up outside a flat above the Shiraz Persian Restaurant.

“Photographers and camera crew are photographing the scene. Police are refusing to comment but Sky News have said the police are searching the flats and and not releasing who the suspects are.

“It’s caused an inconvenience for the businesses and ourselves, as the customers are avoiding the area and the news teams are parking in our car parking spaces. But the public and traffic is running normally.

“Nobody’s been told anything by the police, we are very unaware at the moment. But the news teams are interviewing people in the local shops.

“I was very shocked to see the drama when I got to work. You never think anything like this would happen so close to you. And to be linked to the Westminster attacks is really quite startling.”

The Library of Birmingham was lit up in red, white and blue last night to pay tribute to the victims of the Westminster attacks and to show solidarity with the people of London.

The City flag at half-mast today as Birmingham pays its respects to the #WestminsterAttack victims #WeStandTogether pic.twitter.com/HqIpJ7EtSS

.
Birmingham MPs working in and around Parliament have praised the efforts of the emergency services and police officers during the attacks.

“Birmingham Egyptians condemn today’s horrific attacks at Westminster in which innocent people have died or been injured.

“This type of violence is unfounded and meaningless. Our sincere condolences and sympathies are with the families of those who lost their lives and those injured.”

“Whoever the attacker is, and whatever the cause may be, nothing justifies taking lives of innocent people which is completely against the good of humanity.

“Those responsible must be brought to justice to protect good, in our constant fight to eradicate evil within humanity. We request all communities for the unity and calm. Life is very sacred and this brutal attack must be condemned by all regardless of any background.

“Those responsible must be brought to justice to protect good, in our constant fight to eradicate evil within humanity.”

“The Islamic faith does not allow anyone to take the life of others. Such people are condemned in the holy Quran and in the sayings of the Holy Prophet.

“No religion justifies the indiscriminate killing of individuals in such a barbaric and heartless way, and such acts only serve to differentiate between the misguided and the just.

“We call upon those that may have even a shred of sympathy for the like-minded terrorists to shake their conscience and realise that such acts are the work of evil and not the work of God-fearing people.

“In this tragic difficult time, our sincere thoughts and condolences are with the bereaved families and the general public of the United Kingdom. We also stand firm in solidarity with victims families and the rest of the world, who have been affected and are in mourning.”

A unity vigil has been organised to take place in Birmingham tomorrow, in solidarity with those affected by the events in London.

The peace vigil has been organised by Stand Up To Racism and MEND (Muslim Engagement and Development) and will be held in High Street in the city centre (outside Waterstones and the Bullring) on Friday 24th March at 5pm.

Organisers of the vigil wrote online:

>> READ MORE: Library of Birmingham lit up in tribute to victims of London attacks <<