Birmingham residents to feed homeless during EDL visit to city 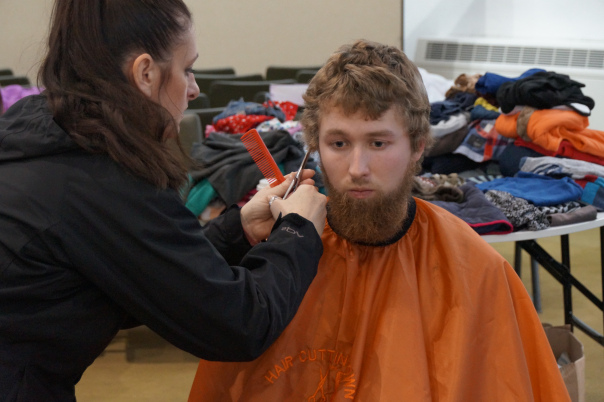 Residents from across Birmingham will be uniting  on Saturday for a show of community spirit, providing food, clothes, live music and free haircuts for the homeless in the city.

On the day the far-right English Defence League (EDL) demonstrate in the city centre, members of Birmingham’s diverse communities are pledging to come together to show a city united for good and standing against hate and disharmony.

Gathering at Carrs Lane Church, volunteers are expected to feed and provide essential items to hundreds of homeless and vulnerable individuals as the 6th annual Birmingham Food Drive gets underway.

Representatives from Muslim organisations will join volunteers from all faiths and none, and partner groups and charities to distribute hot and cold food, clothes, toiletries, sleeping bags and homeware items.

Free haircuts will also be an offer, as well as a basic health check-up service and advice stations providing useful information about accommodation, finances and well-being.

The Birmingham Food Drive is organised in partnership with the Amirah Foundation charity, and this year sponsored by the Al-Khair Foundation.

Hot food on the day is being provided by charity Homeless Heroes and the Shree Geeta Bhawan Temple in Handsworth.

“We’re proud to be a part of the Birmingham Food Drive, and to work with all of the organisations from across the city that come together to help the homeless. In the West Midlands, 4,134 people are estimated to be sleeping rough on any one night.

“With sponsorship from Al-Khair Foundation, we hope this event gives our homeless friends the essential items, interaction and warmth they need at this difficult time.”

Last month, a special fundraising gig was held in Digbeth – organised by Dubgasm and Artivist – which collected a van full of clothes, food and essential items and also raised £200 at the door, which has been donated towards the Birmingham Food Drive.

The Birmingham Food Drive began in 2012 as an initiative between a small group of friends, who distributed packed containers of hot food to rough sleepers in winter.

“The Birmingham Food Drive was launched back in 2012 to bring together all the different individuals and organisations who work with the homeless in the city everyday, to allow them to share the passion and love of what they do to help some of the most vulnerable in our community.

“Together, not only do we provide a service and a temporary solution to the very real problem that is a lack of State care and assistance for rough sleepers and the hungry, but we aim to create solidarity and understanding between everyone we work with; to show that Birmingham pulls together and is united at a grassroots level around social welfare.”

In December 2016, housing and homelessness charity Shelter found that 16,100 people are homeless in the West Midlands – 9,560 of them in Birmingham after detailed research into the extent of the problem.

The charity collected the statistics from Government, social services and councils and used the Freedom Of Information Act to develop what it has called the most accurate picture yet of homelessness in the UK.

Also responding to the presence of the EDL in the city this weekend, the Birmingham Central Mosque will be hosting a special tea party in the morning to challenge community disharmony, while anti-racism organisations Unite Against Fascism (UAF) and Love Music Hate Racism (LMHR) will be holding a protest rally in Victoria Square in the afternoon.

The Birmingham Food Drive takes place on Saturday 8th April at Carrs Lane Church between 12pm – 5pm. Volunteers can arrive from 9am. To find out more, visit the Facebook event here: https://www.facebook.com/events/1288703217879166/