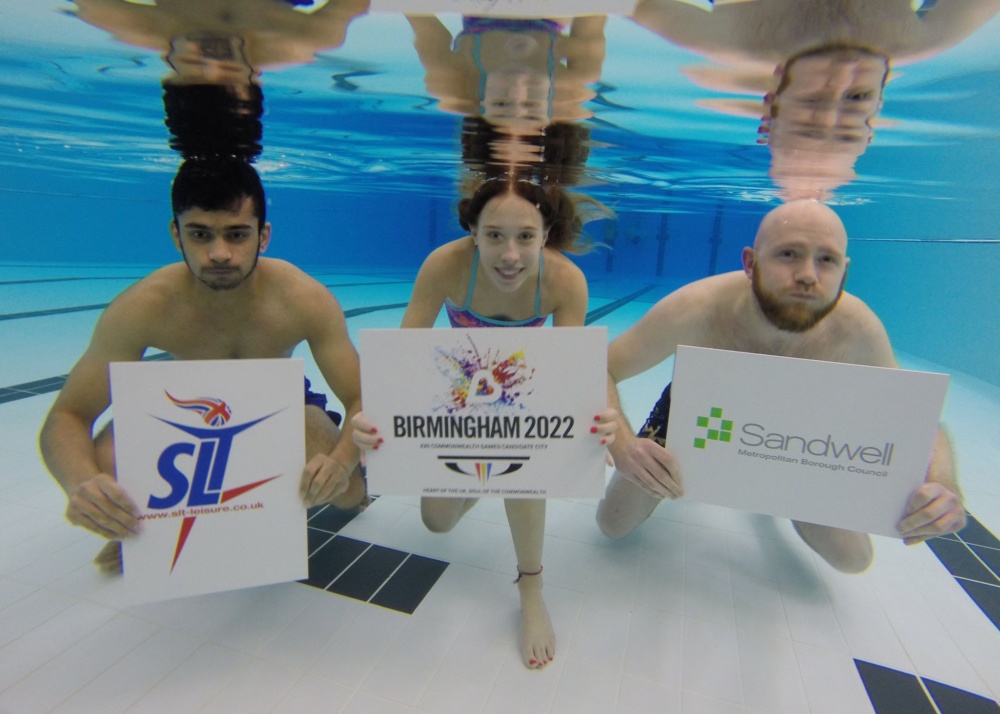 Plans for the Aquatics Centre are already underway, following a public consultation and Cabinet Report by Sandwell Council in Spring 2017, which identified the need for competitive swimming facilities within the Borough as a priority. The plans for the new Sandwell Aquatics Centre align with national sports strategies.

Initially proposed as a leisure complex comprising a 50m pool and community leisure facilities, a Commonwealth Games in the region would see the Sandwell Aquatics Centre plans upgraded, to include a warm-up pool and competition diving pool with a moveable floor.

Diving is an optional sport within the Commonwealth Games sports roster but has been included by the 2022 bid in recognition of the public’s passion for and the country’s potential to win medals at this dramatic sport.

The proposed diving pool will enhance the legacy of the Sandwell Aquatics Centre to the local community as the moveable floor provides flexibility around the use of the pool, catering for beginners and toddlers as a shallow pool, through to the provision of much needed elite training facilities for diving within the Black Country and West Midlands.

Less than ten miles from the centre of Birmingham, the Sandwell Aquatics Centre will extend the benefits of the Commonwealth Games bid across the wider region, providing opportunities to see world class sport as well as providing volunteering, jobs and business opportunities to the local community. The Black Country LEP has already committed its support to the Birmingham bid.

Scheduled to be operational in 2021, permanent poolside spectator seating for up to 1,000 will also be a venue legacy, with a further 4,000 seats installed on a temporary basis during the Games.

“The Birmingham 2022 bid is comprehensive and will provide benefits to the whole of the region, including Sandwell. We have been talking for a while about renewing and continuing to improve our leisure facilities in Sandwell and we are excited that our new build Aquatics Centre will become one of the Games venues for swimming and diving.”

“Black Country LEP have backed the 2021 Commonwealth Games bid along with their West Midlands colleagues recognising both the economic and inspirational benefits that hosting such a prestigious event will bring to our region. The Games will provide a golden opportunity for our local athletes to compete on home ground and raise the aspirations of our residents and businesses to be part of an international event.

“The planned Aquatic Centre at Sandwell, which will include a competition sized swimming pool will provide a sporting and economic legacy for the Black Country as well as the West Midlands. We are all looking forward to a successful conclusion to the bidding process with a West Midlands win so we can begin the planning process in earnest and maximise the opportunities that such an event will bring both for our residents and businesses.”

“It is great news that the West Midlands will finally be getting a world-class competition standard swimming pool. When I was a youngster progressing up the rankings I had to move from Walsall to Wales in order to find facilities of the standard I needed to train.

“The Birmingham 2022 Commonwealth Games and the Sandwell Aquatics Centre will inspire the next generation of swimmers as well as encourage the local community to enjoy swimming and diving and learn a valuable life skill.

“I am so excited about the possibility of the Commonwealth Games coming to Birmingham and urge everyone to back the Birmingham Bid.”

The Ericsson Indoor Arena, part of the Ricoh Arena, is home to Wasps Netball, winners of the Vitality Netball Superleague in their debut season. The new Wasps Netball team is not only proving to be a force in the national game but is engaging with thousands of women and girls beginning or returning to the sport.

The Ericsson Indoor Arena is a 6,000 sq m hall that is fully adaptable and includes high density WiFi using small cell technology, and is regularly transformed to accommodate exhibitions, conferences, sporting events and concerts. All Birmingham 2022 Netball fixtures, including preliminaries and finals will be held in the Arena, with 5,000 temporary seats installed for the Games.

With Coventry just 20 minutes fast train away from Birmingham New Street and 10 minutes from the NEC and Birmingham International Airport, Birmingham can deliver a compact Games for athletes, officials and spectators whilst also spreading the benefits of the Games across the West Midlands.

The Coventry & Warwickshire LEP is fully backing the Birmingham 2022 bid and this partnership also opens up opportunities to work with Coventry on its bid to be UK City of Culture 2021, whilst also contributing to Birmingham’s cultural plans for the Commonwealth Games.

“Hosting the Commonwealth Games in the West Midlands would bring huge benefits to the region and Coventry and Warwickshire Local Enterprise Partnership is pleased to support the Birmingham 2022 bid.

“We’re delighted that the Ericsson Indoor Arena at the Ricoh Arena in Coventry has been selected as one of the venues included in the bid.

“We witnessed the array of positive impacts bringing the London 2012 Games to Coventry and Warwickshire brought to the region, and it would be fantastic to welcome visitors from across the Commonwealth back to our area.

“The West Midlands has all the credentials in place to host a brilliant Commonwealth Games and we are pleased to be working with our colleagues across the region to support the bid.”

“The Ericsson Indoor Arena at the Ricoh Arena is recognised as a centre of excellence across a number of sports, including netball.

“We regularly host Rugby, Netball, Football, Snooker and Weightlifting championships at the venue and have previously held Davis Cup Tennis as well as concerts for Craig David, Jess Glynne and Peter Kay.

“We have the facilities, the team and a huge community of local sports fans who will ensure that Birmingham 2022 would be the best Commonwealth Games netball tournament ever.”

“Netball is my passion and the opportunity to recently return to my roots in the Midlands and play week in week out with the team at Wasps is just a dream come true.

“Having won bronze medals at two Commonwealth Games in Melbourne and Delhi I cannot begin to describe my excitement at the thought of the Birmingham 2022 Commonwealth Games Netball matches being played here at the Ericsson Indoor Arena.

“We have seen a huge increase in the sport since we started Wasps Netball earlier this year and I know that the West Midlands would put on the most fantastic Commonwealth Games ever.”

A Birmingham 2022 Commonwealth Games would offer a compact footprint ensuring limited travel time for athletes and officials from the central Birmingham Athletes Village.

The Sandwell Aquatics Centre is less than ten miles from the centre of Birmingham, whilst Coventry is just 20 minutes fast train away from Birmingham New Street and 10 minutes from the NEC and Birmingham International Airport.

The Black Country LEP and Coventry & Warwickshire LEP are both fully backing the Birmingham 2022 bid and this partnership also opens up opportunities to work with Coventry on its bid to be UK City of Culture 2021, whilst also contributing to Birmingham’s cultural plans for the Commonwealth Games.

Through incorporating these existing and planned venues, Birmingham 2022’s benefits will extend into the wider Midlands region, providing opportunities to see world class sport as well as providing volunteering, jobs and business opportunities to the local community.

“We looked long and hard at the existing international standard venues within the region and are proud to have developed a bid that offers a compact Games with 95% of venues already available. We could not have done that without the support of Ricoh Arena, which is on our doorstep.

“Combined with the new Sandwell Aquatics Centre, which is an important sports and community investment and our only proposed new-build facility and Villa Park, which has recently hosted Rugby World Cup fixtures, these West Midlands venues will ensure that the benefits of a Birmingham 2022 Games will reach far and wide.