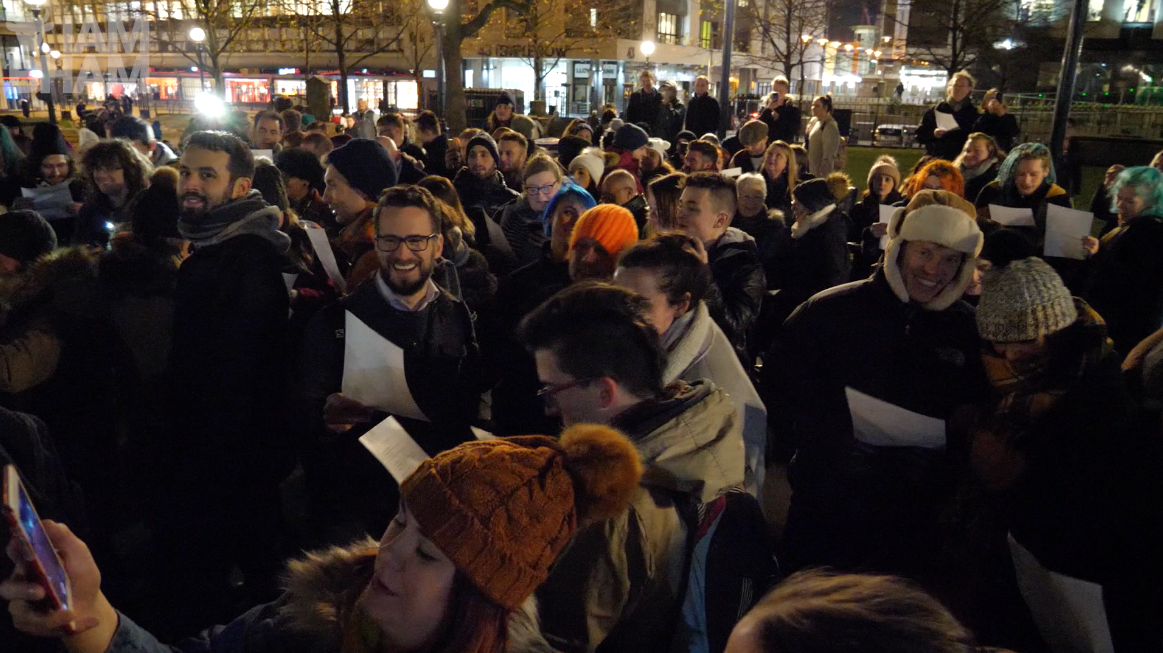 Hundreds of Brummies gathered outside Birmingham Cathedral this evening to belt out Toto’s famous 80s classic ‘Africa‘, in a bid to spread a bit of happiness.

Organisers of the musical flashmob quite obviously didn’t expect the thousands registered on their viral Facebook event page to turn up, but they were initially worried that no-one would show, considering how cold it was.

However, despite the freezing temperatures and to their surprise, people from all over the Midlands came trickling in with only minutes to spare before the start time.

By 6.45pm, well over 150 people had congregated in Cathedral Square – also known as ‘Pigeon Park’ – where organisers were handing out printed lyric sheets for all who wanted to join in.

Speaking about the spontaneously organised event, which was only announced on Facebook in recent weeks, young organiser Curtis Gott said:

“I’ve seen that it (Toto’s ‘Africa’) has grown a massive online presence and it’s becoming like an iconic song. I’ve no idea where it’s come from but I’ve liked it for years. I saw on Twitter that they had sang it in Washington DC and I thought that would be really cool to do in England, and I thought Pigeon Park was the perfect place because everyone knows it in Birmingham.”

Curtis, who is Birmingham manager for the Propaganda club night at the O2 Academy in Horse Fair, said he came up with the idea when he was feeling down, taking inspiration from similar mass sing-alongs, including one in Newcastle last month, and a viral event outside The White House in Washington, which raised money for The Water Project.

In a similar vein, the duo behind the Birmingham gathering went around with a collection tin to raise funds for charities in Africa.

“So I’ve got a little tin and I’m not sure which charity yet, but obviously one in Africa. I want to go with an FGM (Female Genital Mutilation) awareness charity, because it’s quite important to me, stuff like that.”

Co-organiser Samuel Catlow said he was proud of what he and Curtis has achieved and the ability to bring people together for something good during difficult times.

Many who heard of the event on social media expressed disappointed on missing out, but both Sam and Curtis have confirmed that they will be holding another similar flash mob in the near future.

Following the success of today’s ‘Africa’ singalong, an ‘Do the Macarena in Pigeon Park‘ event has been set up on Facebook by Love Activists. They hope to raise money for homeless charities by mass performing the iconic 90s dance routine on Saturday 16th December at 5pm.