Cor-brrrryn: Someone actually went and built a Jeremy Corbyn snowman! 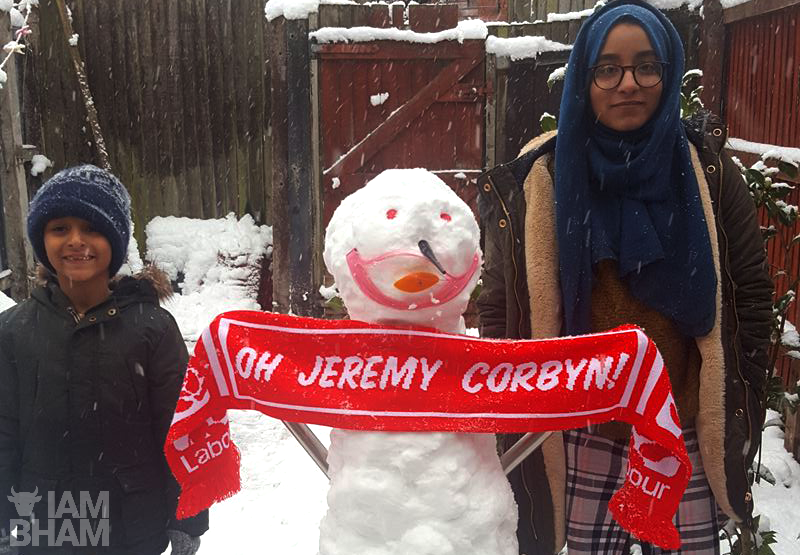 SNOOOOW JEREMY CORBYN: The Leader of the Labour Party's cool counterpart in Birmingham

As temperatures plummeted across the country this week and schools were out on account of heavy snowfall, out came an army of frozen snowmen raised across front yards, back gardens and public parks.

And it wouldn’t quite be a very British winter without some snow sculpture tributes to popular culture figureheads.

While some might argue Prime Minister Theresa May is in no need of a snowy doppelgänger to cement her reputation as an ice queen; a family in Birmingham certainly felt her political opponent and Leader of the Opposition, Jeremy Corbyn, could do with chilled counterpart.

And here he is. Altogether now, “Snooooooow, Jeremy Corbyn!”

Father-of-two Ash, from Sparkbrook in Birmingham, created the Corbyn snowman with his children on Sunday,

Speaking to I Am Birmingham, he said:

“It started off as a normal snowman until my youngest son finds the Jeremy Corbyn scarf and starts to sing “Oh, Jeremy Corbyn!” My daughter then decides to look for Jeremy’s bearded and had to resort to using her pink hair extensions, saying ‘I’m sure Jeremy won’t mind’.

“My wife thought it would only be sensible to match the pink beard with pink buttons for eyes and there you have it, we got a pink bearded Snow-Corbyn!

“We thought it was different to your average and boring snowman.”

Ash shared the photo on Facebook where it began receiving quite a number of shares and lots of positive feedback from friends and supporters of the Labour leader.

It is also believed to have impacted increased majorities for a large number of Labour parliamentary candidates across the UK, many who had initially doubted Corbyn’s ability to steer the party towards electoral success.

Earlier this month, the Labour party further extended its lead over the Conservatives to eight points, according to a new poll by Survation, which puts Labour on 45 per cent, with the Tories trailing behind on 37 per cent, and the Liberal Democrats under Vince Cable on six per cent.

An eight point lead, the polling company added, would likely put Labour into overall majority territory if such vote share totals were reflected at the ballot box.

The so-called ‘Corbyn-effect’ hasn’t gone unnoticed though. In the run up to Christmas, high street stores have been heavily stocked with everything from Jeremy Corbyn themed colouring books, comics, keyrings and collector’s Annuals; to stylish t-shirts, coffee mugs and festive jumpers.

“We have a family of Jeremy Corbyn fans. All generations like him as he is a person that genuinely cares, puts the people first and hasn’t changed his principles.”

(Visited 637 times, 1 visits today)
https://www.iambirmingham.co.uk/2017/12/12/cor-brrrryn-someone-actually-went-built-jeremy-corbyn-snowman/https://www.iambirmingham.co.uk/wp-content/uploads/2017/12/Jeremy-Corbyn-Snowman-in-Birmingham-crop.pnghttps://www.iambirmingham.co.uk/wp-content/uploads/2017/12/Jeremy-Corbyn-Snowman-in-Birmingham-crop-220x140.png2017-12-18T19:47:34+00:00Staff ReporterCommunityElectionsNewsPoliticsAsh,B'ham,Birmingham,Brum,celebrity snowman,celebrity snowmen,Christmas,Corbyn,I Am Birmingham,Jeremy,Jeremy Corbyn,Jeremy Corbyn snowman,Jeza,Labour,Labour Leader,Labour Party,politician,Politics,Snow,Snowman,Sparkbrook,UKSnow,WeatherAs temperatures plummeted across the country this week and schools were out on account of heavy snowfall, out came an army of frozen snowmen raised across front yards, back gardens and public parks. And it wouldn't quite be a very British winter without some snow sculpture tributes to popular culture figureheads. While some might...Staff ReporterStaff Reporter[email protected]AdministratorI Am Birmingham
« Jedi mania hits Birmingham ahead of Star Wars: The Last Jedi launch
Sutton Coldfield cricket fan enjoys Ashes screening with Darren Gough »