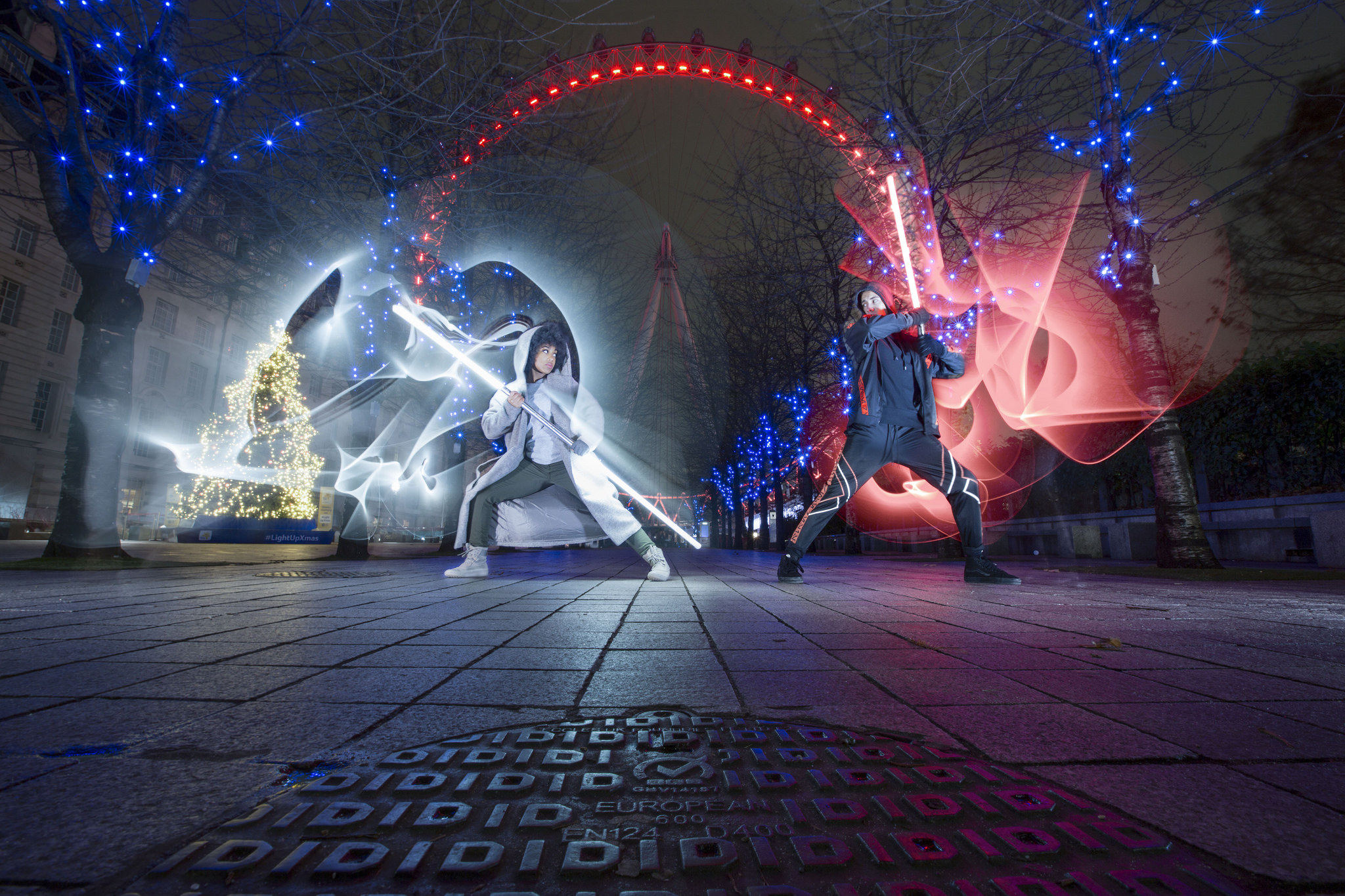 Two martial arts experts surprised and delighted Londoners with a spectacular lightsaber duel, as ‘Jedi fever’ hit the UK ahead of the highly anticipated release of Star Wars: The Last Jedi on Thursday.

The stunt was held as part of special lightsaber based photo shoots which took place in London, Birmingham and other UK cities to mark the nationwide film release of Star Wars: The Last Jedi, on December 14th.

Shania West, a trained stunt fighter, and Anton Simpson-Tidy, a world champion martial arts athlete, were given Lightsabers to train with for a week before staging the duel on London’s Southbank.

Teenagers at a London skateboard park were treated to an unexpected and jaw-dropping performance of martial arts skills, tricks, flips and swordsmanship.

“From day one of our shoot here in the UK the feeling of excitement and love for Star Wars has been palpable; and if you grew up loving Star Wars, you grew up loving lightsabers” commented Writer & Director of Star Wars: The Last Jedi, Rian Johnson “The cast trained for months to perfect their lightsaber skills, so it’s really impressive to see what these two Jedi-in-training have put together in just a few days.”

Disney commissioned Star Wars fan and photographer Matt Scutt to create a series of stunning light trail pictures using the famous Jedi weapon. The Instagram sensation, who has over 307,000 followers, and is famous for his long exposure photographs toured the UK this week to produce the remarkable set of images with Star Wars fans wielding a variety of different coloured ‘sabers.

Passerby in London, Birmingham, Manchester and Liverpool witnessed the photoshoots, with Matt teaming up with Star Wars fans in each city to create images, which took over four hours each to complete.
Photographer Matt Scutt said: “I’ve been a fan of Star Wars since I was kid – so to be given the chance to capture lightsabers in action was a dream project”.

2017 Census figures revealed that 176,632 people in England and Wales identify themselves as Jedi Knights and Jediism was officially recognised as a religion in 2001 and is now the 7th most popular faith in the UK.

In Star Wars: The Last Jedi, the Skywalker saga continues as the heroes of the UK’s biggest film of all time, The Force Awakens, join the galactic legends in an epic adventure that unlocks age-old mysteries of the Force and shocking revelations of the past.

Star Wars: The Last Jedi is written and directed by Rian Johnson and produced by Kathleen Kennedy and Ram Bergman. J.J. Abrams, Tom Karnowski and Jason McGatlin are the executive producers.