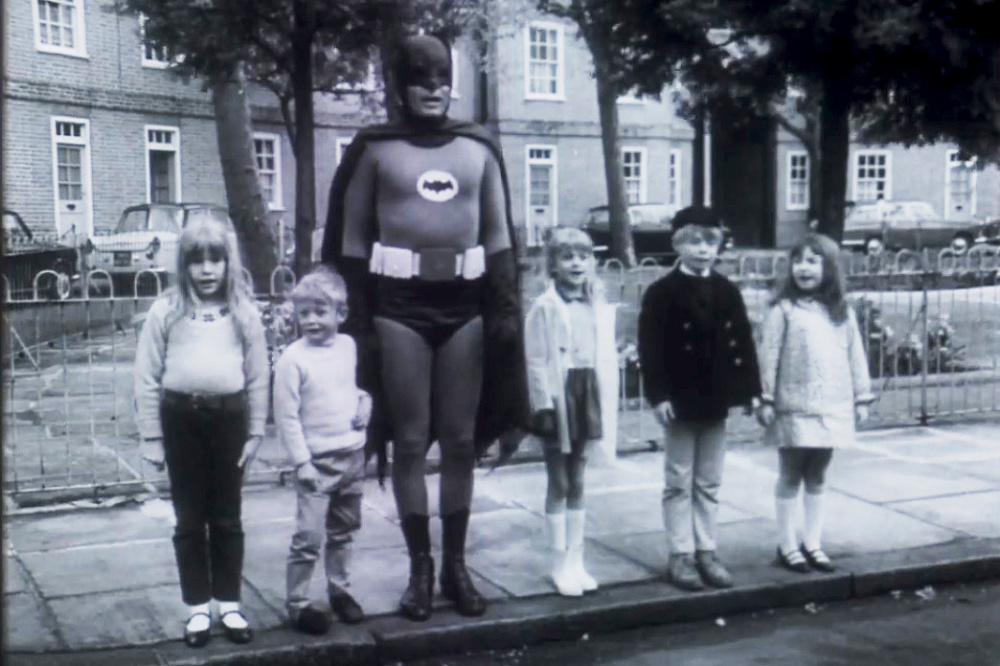 Long-lost footage of Adam West’s Batman teaching road safety to children will be screened for the first time in over 50 years to kick off a nationwide hunt for 100 missing telly gems.

The clip from May 1967 will be shown to an audience of TV professionals and enthusiasts at Birmingham City University on Saturday (April 14), as Birmingham based Kaleidoscope launches its list of the UK’s top 100 missing TV shows.

Kaleidoscope, which specialises in finding missing television footage, recently discovered the clip which shows the Caped Crusader teaching the Green Cross Code to youngsters on London’s streets and was never screened outside of the UK.

The find comes as Kaleidoscope launches a search for the top TV shows thought to have thought to have been consigned to history, which industry professionals most want to see recovered.

Episodes of iconic British TV programmes Doctor Who, Top of the Pops and The Avengers topped the list, after 1,000 industry professionals, journalists, academics and telly addicts revealed which shows they most wanted to see found.

The list will be unveiled at Birmingham City University’s Parkside Building alongside screenings of found clips and episodes from show such as Out of the Unknown, Sexton Blake and The Goodies.

Bosses have called on home viewers to come forwards with any recordings and video tapes which may have spent decades hidden away in lofts but could contain precious ‘lost’ material.

Among the most prized missing material are early episodes of Doctor Who featuring Mark Eden as Marco Polo, a Hancock’s Half Hour episode, Lady Chatterly’s Revenge from 1957 and a Dad’s Army episode – The Loneliness of the Long Distance Walker, first screened in 1969.

The top 10 missing shows are:

4. Out of the Unknown

9. Not Only But Also

“We spend a lot of time searching through old canisters or looking through people’s lofts to try and find these shows or clips which are thought to have been completely erased from history.

“What we wanted to do this time was to ask TV fans which shows they wanted us to find and it’s really interesting to see that its real British institutions like Doctor Who and Top of the Pops that came out on top.

“These lost episodes really can end up in the most unusual of places and people might not even know they have them.

“Scenes from Sexton Blake or Callan were only kept because Australian censors cut them out for being too violent for 60s TV. We’ve had universities find clips accidentally stored at the end of video tapes and I myself have literally clawed tapes from the rafters of Bob Monkhouse’s roof, to get my hands on some Celebrity Squares and The Golden Shot episodes.”

The list’s publication comes as one of Kaleidoscope’s greatest finds, The Avengers – Tunnel of Fear episode, was released on home DVD earlier this week after being missing for over 55 years.

TV gameshows are thought to have some of the biggest gaps in records, but are often kept by members of the public who may have appeared on the shows or have had friends or family who did.

Other episodes are retained for unusual reasons, such as the Doctor Who stories The Smugglers and Fury from the Deep, which only remain as a few scary clips after Australian censors removed scenes from their original broadcast for being too risqué for TV.

The top 100 list also includes classic shows such as The Likely Lads, Steptoe and Son, Fraggle Rock and The Liver Birds.

Kaleidoscope chiefs have called for anyone who may have lost footage to get in touch by emailing [email protected] or visiting www.tvbrain.info to find check the list of lost TV shows.

(Visited 4,620 times, 1 visits today)
https://www.iambirmingham.co.uk/2018/04/13/long-lost-footage-batman-london-launches-uk-hunt-rare-tv-clips/https://www.iambirmingham.co.uk/wp-content/uploads/2018/04/Batman-Green-Cross-Code-800x533.jpghttps://www.iambirmingham.co.uk/wp-content/uploads/2018/04/Batman-Green-Cross-Code-300x200.jpg2018-04-14T19:34:56+00:00Staff ReporterEntertainmentFilmGeekfestMediaNewsShowbizTechWhat's On1967,Adam West,Adam West as Batman,archive,Batman footage,Batman in London,Batman in the UK,Batman road safety footage,Birmingham,Birmingham City University,black and white,caped crusader,clip,footage,green cross code,Kaleidoscope,Kaleidoscope TV,London,long-lost,lost,public announcement,public message,rare,road safety footage,screeningLong-lost footage of Adam West’s Batman teaching road safety to children will be screened for the first time in over 50 years to kick off a nationwide hunt for 100 missing telly gems. The clip from May 1967 will be shown to an audience of TV professionals and enthusiasts at...Staff ReporterStaff Reporter[email protected]AdministratorI Am Birmingham
« 5 things you need to know about Birmingham 2022 poet Amerah Saleh
VIDEO: Birmingham 2022 | Amerah Saleh discusses her Birmingham 2022 handover poem ‘Tourist in My City’ »