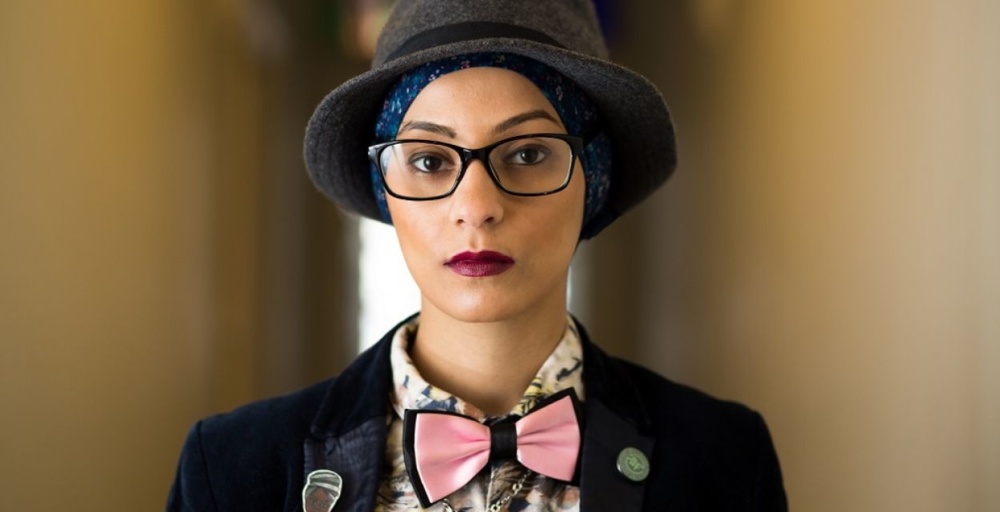 Birmingham based spoken-word artist Amerah Saleh is one of five main city artists taking part in the official Birmingham 2022 handover ceremony on Sunday 15 April 2018, which will see young people and artists from the city perform as part of the Closing Ceremony of the Gold Coast 2018 Commonwealth Games.

25-year-old Amerah joins film maker Daniel Alexander, rapper Lady Sanity, principal ballet dancer Céline Gittens and choreographer Rosie Kay as they all take part in a handover ceremony which will be performed live in the Carrara Stadium, Gold Coast, Australia and part-live from Birmingham. The global televised audience is estimated as one billion people.

“I am interested in connecting people through sharing stories about my identity, my communities identity and linking these to the experiences of people around the world. This is a great an opportunity to connect with a global audience and be part of the moment when we invite the world to see how much culture we embody as a city. Raise those glasses to Birmingham!”

Her work has also taken her across Europe including to Poland, Netherlands and Bosnia. While expanding her creative skills and forging opportunities for others, she continues to perform at events across the country, inspiring many along the way.

#2  She’s a producer at Beatfreeks and Free Radical

Amerah has been part of Birmingham’s Beatfreeks Collective since its inception in 2013, inspiring and empowering a new generation of young performance artists through several special programmes and projects including Young Giant and Free Radical, where she is now a key producer.

During her time at Beatfreeks, she has helped produced a host of interactive events and workshops, from Selfridges’ Music Matters initiative to Heritage Lottery Fund’s Routes2Roots campaign, and wider West Midlands project Secret Museums.

She’s now committed to building Free Radical as it embarks on becoming an Arts Council National Portfolio Organisation and a part of Kick The Dust, a pioneering new funding programme distributing £10m from the National Lottery to heritage and youth organisations across the UK.

“I am ready to develop artists, my arts practice and drive conversations around where the art and activist meet in artivists. It didn’t take long for the decision to be made.”

In 2015, Amerah was one of a small number of people selected to be photographed by internationally renowned photographer Vanley Burke for an outdoor exhibition.

Exploring the changing history of Birmingham’s Stratford Road, My Route explored the richly diverse heritage around the area, one of Birmingham’s busiest and best-known thoroughfares, identifying changes in the population, landscape and culture over the past 60 years influenced by the settlement and migration of new communities along the road.

Around 25,000 Birmingham residents connected with the My Route experience, either as exhibition visitors, participants or volunteers, through a series of lively arts, culture and research activities.

A large image of Amerah Saleh was displayed along Stratford Road during the exhibition run, and she was also featured in a documentary to compliment the project.

#4  She was asked to showcase her work to Prince William

Posted by Amerah[Soul'Poet] on Monday, 2 December 2013

Amerah’s involvement with projects connected to the Library of Birmingham have been quite extensive over the years, a both a member of Beatfreeks and as a poet in her own right.

One such project was Creative Superheroes, set up to help develop and support young artists in Birmingham, ensuring they receive paid work and commissions around the West Midlands and beyond.

It was then through her work with young people via innovative workshop programmes, that Amerah was invited to an audience with Prince William at the Library of Birmingham in November 2013. She clearly kept him amused!

Amerah has recently established her own publishing house, Verve Poetry Press (an offshoot of Birmingham’s Verve Poetry Festival which she also helped curate).

She felt there was a need for a platform dedicated to poetry in written form in the region; and is launching the next two publications from Verve in just over a week. One is her own work and the other from fellow poet Casey Bailey. In February, the publishing press released its first book, Poetry Jam’s 5th Birthday Anthology.

Her debut book, I Am Not From Here is a poetry volume exploring aspects of identity, culture, social politics and public engagement, highlighting struggles, pride and conflict. With a personal dissection of a dual British-Yemeni identity, wordsmith Saleh’s convictions and conundrums make for an interesting and compelling read.

In her own words, the work is “a collection that twists and turns through the complexities of being Birmingham born but of Yemeni decent and culture; of being Muslim in a city of mixed faiths and in a country of little faith; of spending time in Yemen only to find that as a result you are refused entry to other countries and have forgotten how to live in yours; of losing loved ones too young (and when are we ever old enough for that?); of being split between the language and words of two tongues, and often finding that neither has the words you need; of facing hatred for acts that were none of your doing, and inner turmoil as your mind and body seek the solace and comfort of belonging to enable you to turn and face the world.”

You can meet Amerah Saleh and fellow poet Casey Bailey at the official launch of their books at Waterstones Birmingham on Friday 20th April. I Am Not From Here is also available to pre-order from Foyles Bookstore here, ahead of its April 19 release date.