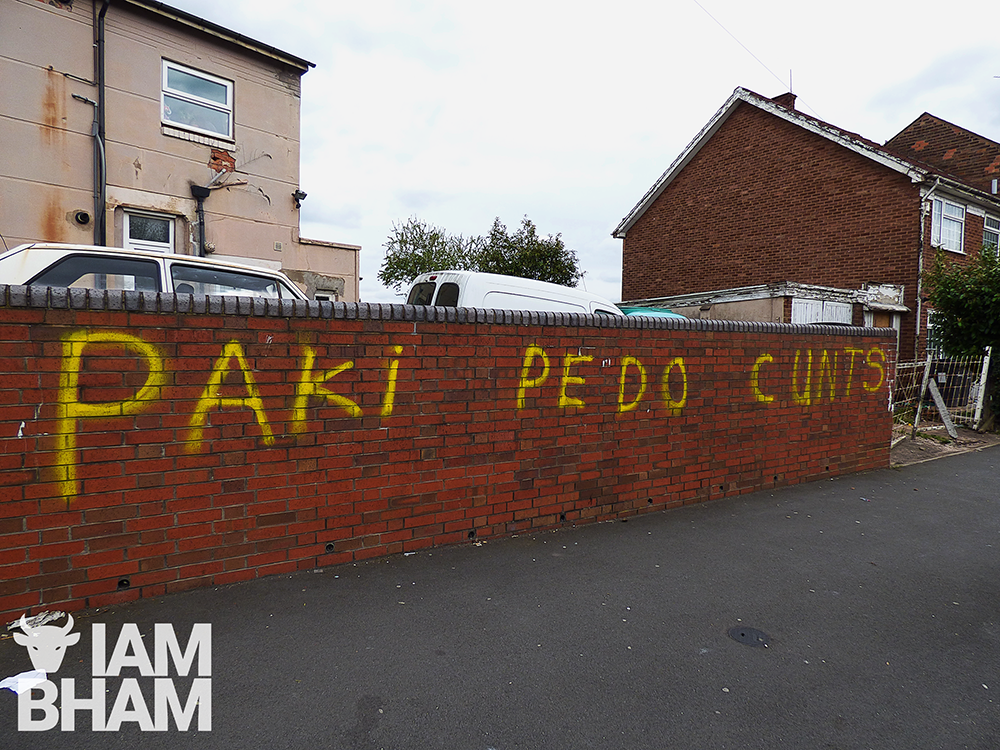 A series of vile and racist messages have appeared daubed across properties in the Small Heath area of Birmingham.

Racist slurs including the words “Paki Pedo” have been scrawled across homes and walls in the predominantly Muslim neighbourhood, in the south-east of the city.

Residents were shocked to discover the offensive vandalism yesterday morning, featured in several prominent streets in the area, with locals painting over some of the hate speech to prevent it inciting further outrage or upset.

The incident follows similar slogans appearing in the area last year, in the same font and style of writing, over Hob Moor Road bridge near Haybarnes Park.

The latest abusive messages are sprayed in several locations in Small Heath, including across the walls of a property on the corner of Waverley Road and Tennyson Road, as well as on pillars that lead into Small Heath Park.

Additional hate-filled messages were discovered near a bus stop in Oldknow Road, and across the walls inside Digby Park.

Several residents confirmed they had reported the racist graffiti to West Midlands Police, after similar disturbing content had also been sprayed on their cars in Oldknow Road, across the street from Holy Family School.

Almost all of the locations targeted appear to be close to parks, schools and nurseries, and it has been reported that pupils walking by have been stopping and reading the abusive messages on their way home from school.

A local resident claims to have secured video footage of his car being targeted with spray paint as part of this latest wave of vandalism. He told I Am Birmingham that he was passing the video onto the police.

One of the racist messages in Digby Park has now been painted over by locals in a bid to stop the words from causing pain and distress to families using the park.

Small Heath – a part of the city recently immortalised in TV shows Peaky Blinders and Man Like Mobeen – is home to one of the city’s largest South Asian population, primarily of Pakistani and Bangladeshi heritage; most of whom are also Muslim, according to the Office for National Statistics.

Local resident and journalist Rangzeb Hussain was shocked to see the graffiti. He said:

“It is disturbing that the vile slogans have predominately appeared in and around Small Heath Park, ahead of the May Bank Holiday weekend.

“There is a fun fair currently setting up camp inside the park and preparations are in full swing to get the show ready for families. It is very likely the perpetrator behind the abusive graffiti planned the crime to ensure that a maximum number of local families would be exposed to the harmful and upsetting words on their way to the fun fair.

“At a time of mass unemployment, with the tabloid press fanning stories of division and race, it is absolutely imperative that people remain calm and united against those who would tear apart local communities.”

According to West Midlands Police, a hate crime is defined as “any criminal offence which is perceived by the victim or any other person, to be motivated by hostility or prejudice towards a person based on their race, religion, sexual orientation, disability, or gender identity.”

If you are a victim of hate crime or would like to report hate crime in Birmingham, please contact West Midlands Police on 101, or visit: www.west-midlands.police.uk/your-options/hate-crime.

(Visited 4,675 times, 1 visits today)
https://www.iambirmingham.co.uk/2018/05/01/sickening-racist-graffiti-daubed-predominantly-muslim-neighbourhood-birmingham/https://www.iambirmingham.co.uk/wp-content/uploads/2018/05/Racist-Paki-Pedo-Graffiti-in-Small-Heath-Birmingham-05-800x600.pnghttps://www.iambirmingham.co.uk/wp-content/uploads/2018/05/Racist-Paki-Pedo-Graffiti-in-Small-Heath-Birmingham-05-300x225.png2018-05-01T09:40:34+00:00Staff ReporterCommunityCrimeInvestigativeNewsRacismStreet LifeB'ham,Bangladeshi,Birmingham,Brum,CCTV,community,Crime,criminal activity,Gallery,Graffiti,hate speech,I Am Birmingham,Images,Islamophobic,Neighbourhood,offensive,Paki,Pakitsani,park,Photos,Pictures,Police,Racism,Racist,Rangzeb Hussain,roads,Small Heath,south Asian,Street,streets,vandal,vandalism,Video,West Midlands Police,WMPA series of vile and racist messages have appeared daubed across properties in the Small Heath area of Birmingham. Racist slurs including the words 'Paki Pedo' have been scrawled across homes and walls in the predominantly Muslim neighbourhood, in the south-east of the city. Residents were shocked to discover the offensive vandalism yesterday morning, featured in...Staff ReporterStaff Reporter[email protected]AdministratorI Am Birmingham
« Birmingham Yardley MP Jess Phillips becomes Big Issue vendor for the day
IN PICTURES | Flatpack Festival: How does change happen? »