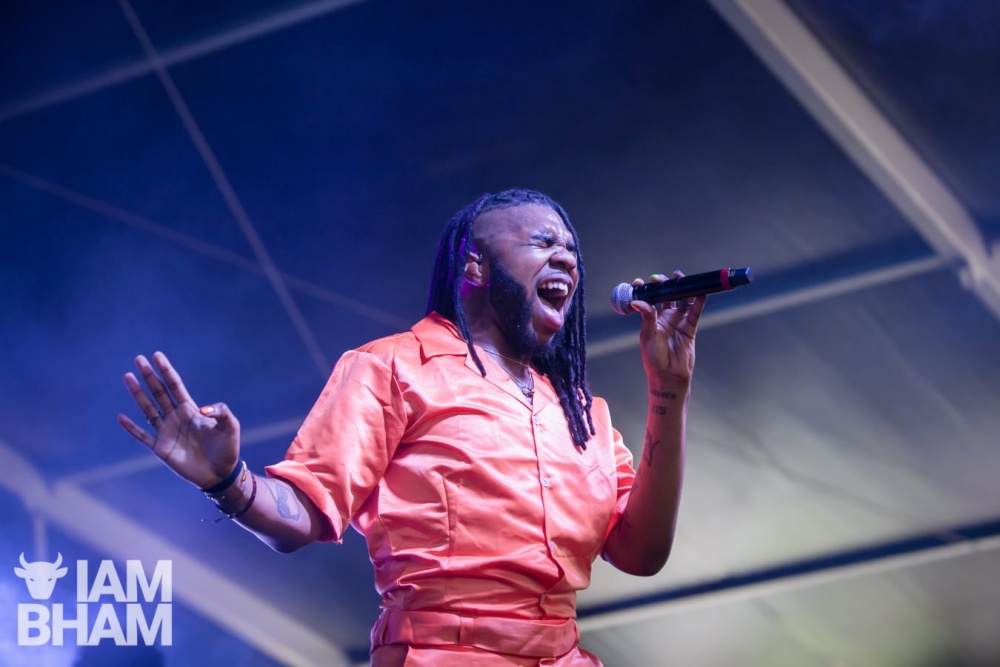 After a two year absence, MNEK made a grand comeback at this year’s Birmingham Pride Main Stage.

Ahead of his newest single ‘Colour’ being released in June, MNEK treated pride goers to an electrifying set cementing MNEK as a musical sensation.

MNEK is no stranger to the spotlight, having worked with some of the biggest artists of our generation. From Beyonce to Little Mix, the singer-songwriter-producer triple threat, MNEK has left his mark on some of the most influential pop songs of the decade.

Away from this, he has forged a successful career for himself as a solo artist that just keeps on growing.

After a two year absence from the stage, MNEK made his grand return headlining Birmingham Pride’s Main Stage. Incorporating new elements into his set such as suave dances and experimenting with new ways of performing, MNEK has cemented himself as a stand out from the weekend and has demonstrated how he continues to thrive within the industry.

Ahead of Birmingham Pride, MNEK has been busy filming his new video for his upcoming single Colour ft Hailee Seinfeld, which is set for release on June 1st.

MNEK is known for his ability to express himself within his music and admits himself that in the past, some of the songs he has put out have been quite sad. With ‘Colour’ and the upcoming album, MNEK wants to express the new direction he is going in.

“Everyone gets sad and that’s fine,” he says, but the songs on this album are all about exploring a new vibe and a plethora of tones – colour in particular is a happy song.

With Hailee being the only collaboration on this album, this is the perfect opportunity for him to convey the diversity of his own talent. In working alongside so many other artists and aiding them in coming out of their shell, it’s now time for him to come out of his.

MNEK is no stranger to calling out injustice and sees this as the bare minimum. As a gay man of colour, he has a unique point of view and his presence in the music industry is one that is definitely needed.

In the essence of this year’s Birmingham Pride theme: “Be You”, the most important thing to MNEK is time. He told I Am Birmingham that every community is different and every individual is subjected to different experiences. However, he says no person should feel pressured to come out or be outed.

“It has to be their own time. Being true to yourself is important but coming out should be ‘in your own time at the right time.”

Watch MNEK’s full interview with I Am Birmingham’s Joshua Williams below:

I Am Birmingham's Joshua Williams catches up with music artist MNEK at @Birmingham Pride 2018.

.
Birmingham Pride was held on Saturday 26 and Sunday 27 May, and will return next year.

(Visited 723 times, 1 visits today)
https://www.iambirmingham.co.uk/2018/05/27/mnek-makes-comeback-performance-birmingham-pride/https://www.iambirmingham.co.uk/wp-content/uploads/2018/05/Birmingham-Pride-2018-MNEK-by-Lensi-Photography-03-800x534.jpeghttps://www.iambirmingham.co.uk/wp-content/uploads/2018/05/Birmingham-Pride-2018-MNEK-by-Lensi-Photography-03-300x200.jpeg2018-05-27T14:35:00+00:00Joshua WilliamsEntertainmentEventsLGBT+MusicNewsShowbizWhat's Onalbum,Artist,Be You,Birmingham,Birmingham Pride,Brum Pride,Colour,Comeback,Gay,hailed seinfeld,Hailee Seinfeld,I Am Birmingham,Icon,Identity,Lesbian,LGBT,LGBT Pride,LGBTQIA,lgtb,MainStage,MNEK,music,performer,person of colour,POC,Pride,producer,sexuality,Singer,Single,West Midlands,What’s onAfter a two year absence, MNEK made a grand comeback at this year's Birmingham Pride Main Stage. Ahead of his newest single 'Colour' being released in June, MNEK treated pride goers to an electrifying set cementing MNEK as a musical sensation.  MNEK is no stranger to the spotlight, having worked with some...Joshua WilliamsJoshua Williams[email protected]AuthorJoshua Williams is the former Mr Birmingham 2015-2017. He is a young ambassador, politics student and mental health and LGBTQ+ rights campaigner.I Am Birmingham
« 10 photos of revellers enjoying Birmingham Pride 2018
Check out these Drag Queens ‘Serving Looks’ over Birmingham Pride! (10+ photos) »