OPINION: It might be 2018 but cultural appropriation is STILL a thing 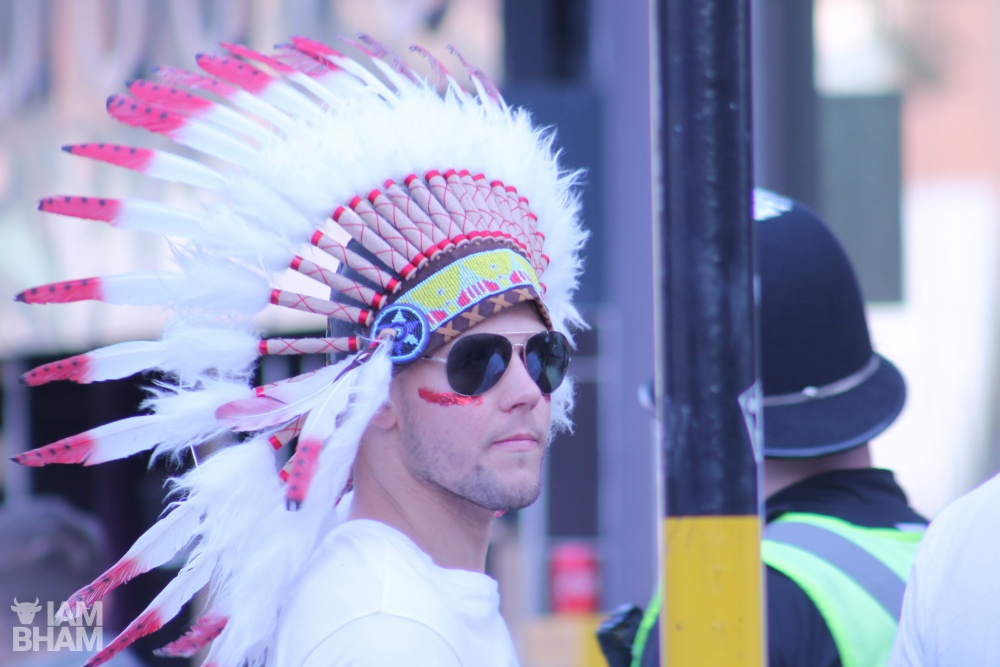 A non-Native person wearing a Native American war bonnet as a "fashion accessory" is commonly cited as an example of cultural appropriation, as seen here at Birmingham Pride 2018 (Photo: Harvey McDonald)

Why is it that in 2018, with constant talk in the media about racism and interracial relations, do we STILL have people that don’t understand that cultural appropriation is wrong?

In this case, revellers swaggering along Hurst Street during Birmingham Pride in the cultural attire. I mean, come on, seriously?

In 2014, Glastonbury Festival banned the wearing of Native American war bonnets after a petition on change.org, which had initially only garnered 65 signatures. While it wasn’t an isolated call to action, it was the first time the headdresses had been banned for cultural insensitivity in the UK.

Stourbridge based campaigner Daniel W. Round, who launched the Glastonbury petition, stated at the time:

“There has long been consensus among indigenous civil rights activists in North America about the wearing of headdresses by non-Natives – that it is an offensive and disrespectful form of cultural appropriation, that it homogenizes diverse indigenous peoples, and that it perpetuates damaging, archaic and racist stereotypes.”

It is difficult to believe that such an item simply snuck in as members of the security team did pat downs, bag checks and even wallet checks at the point of entry. I personally saw this individual roaming around for about an hour giving ample opportunity for security staff to have the offensive item removed.

Therefore I would like to ask what Birmingham Pride’s stance on cultural appropriation is? Are culturally appropriating items of clothing allowed at Birmingham Pride? And, if banned from the event, why was such an offensive item allowed (a) past the increasingly rigorous security checks on the gates and (b) past various members of security staff whilst inside the official Pride zone?

Whether the organisers of the event are aware or not, I think it’s time they addressed the issue and took action. It’s time Birmingham Pride reflected its key communities and audience, and banned offensive racially stereotypical costumes from an event traditionally celebrating the fight against oppression.

At the time of publication, I had contacted Birmingham Pride organisers for a response and am awaiting reply, which will be soon published.

UPDATE: Birmingham Pride Director Lawrence Barton has replied with a condemnation of cultural appropriation. His full response can be found here.

(Visited 1,403 times, 1 visits today)
https://www.iambirmingham.co.uk/2018/05/28/birmingham-pride-2018-cultural-appropriation-still-thing/https://www.iambirmingham.co.uk/wp-content/uploads/2018/05/HMcD93-Pride-Photo-31-800x534.jpghttps://www.iambirmingham.co.uk/wp-content/uploads/2018/05/HMcD93-Pride-Photo-31-300x200.jpg2018-05-28T17:30:27+00:00Harvey McDonaldActionBLMColumnCommunityEventsFaithFashionHistory & HeritageLGBT+PoliticsRacismWhat's On2018,America,American,B'ham,Bham Pride,Birmingham,Birmingham Gay Pride,Birmingham Pride,Birmingham Pride 2018,Brum,Brummie,Brummies,City,colonialism,cultural appropariation,cultural appropriation,Culture,Ethnic Minorities,festivals,Gay,Gay and Lesbian,Gay Birmingham,Gay Brum,Gay Pride 2018,Glastonbury,Harvey McDonald,marginalisation,native american,Pride,Pride protest,Racism,UK,whitenessWhy is it that in 2018, with constant talk in the media about racism and interracial relations, do we STILL have people that don't understand that cultural appropriation is wrong? In this case, revellers swaggering along Hurst Street during Birmingham Pride in the cultural attire. I mean, come on, seriously? In...Harvey McDonaldHarvey McDonald[email protected]AuthorI Am Birmingham
« 10 Photos of Jennifer Lawrence hiding at Birmingham Pride 2018 that will make you say “Where? I can’t see her!” (Number 3 will shock you)
Lunar Festival to open a day early for even more music and more fun »