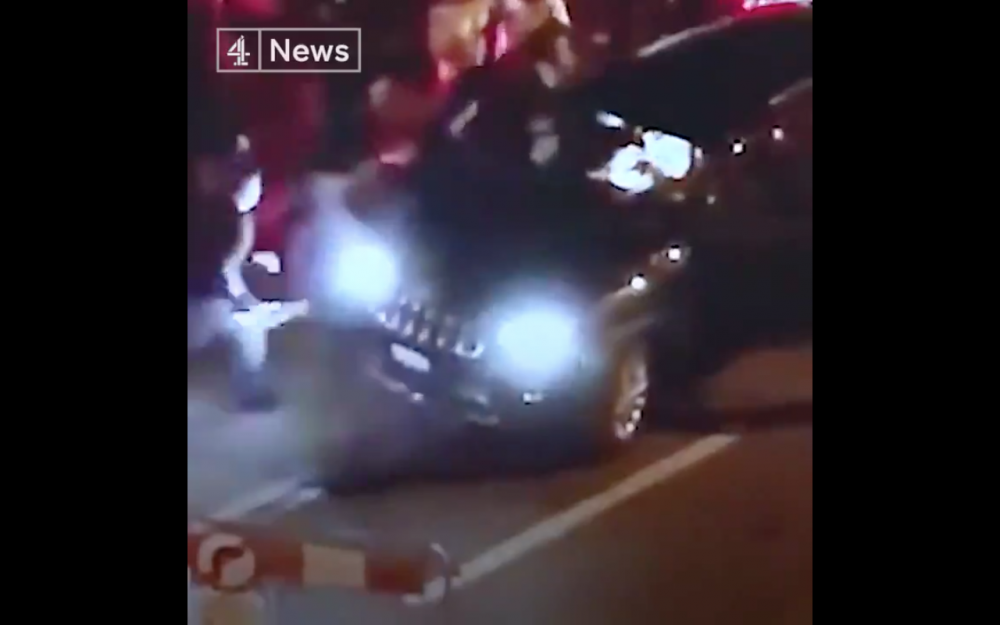 A fake news video of hooligans in Switzerland attacking cars has been circulating with false claims of being footage of Muslims in Birmingham during Ramadan (Image: Channel 4/Spravce Hooligans)

A fake news story and video about “Muslim gangs” in Birmingham has gone viral all around the world, despite the individuals in the footage not being Muslim or from Birmingham.

Not only was the footage not filmed in Birmingham, it isn’t even from the UK. Yet, that hasn’t stopped it from being shared thousands of times on social media platforms, as far-right activists have attempted to claim it shows “Muslims attacking cars during Ramadan”.

Labelled as such by groups deliberately and actively propagating fake news against Muslims, the video clip has been shared with false descriptions and comments on platforms including Facebook and Twitter.

Many have watched and shared the video – mostly right-wing, far-right and alt-right activists – believing it to be real, while others have commented to clarify it is indeed fake.

The footage shows a group of men attacking cars as they attempt to drive along a road, with even more individuals converging on the street to join in the hostile action.

While many have claimed the footage was shot recently in Birmingham, using it to prop up claims of “no-go zones” in the city.  The reality is that it is, in fact, old footage of football fans in Switzerland.

Channel 4 News has been one of the news outlets to verify and confirm that the authenticity of the clip, highlighting that it captures football hooligans rioting in Switzerland, fighting after a game between Basel and Lucerne.

They're football hooligans in Switzerland. pic.twitter.com/nxE4cIQGK3

The misleading version of the clip has been posted to Facebook repeatedly while being shared on Twitter over 150,000 times.

Channel 4 News have been praised for fact checking the fake news, a practise they are committed to and have administered a number of times for stories seemingly targeting the Muslim community.

Muslims in Birmingham and across the world are currently observing the holy month of Ramadan, a time for spiritual reminders, physical detox, charity and fasting.

In 2015, Fox News made headlines after claiming the entire city of Birmingham was a “no-go zone” for non-Muslims.

Controversial Fox News host Jeanine Pirro was forced to issue a official on-air apology many days later, following her failure to challenge claims made by ‘terror expert’ Steve Emerson, who had insisted only Muslims were allowed in Birmingham, and that it was a “no-go” zone for everyone else.

The broadcast attracted international ridicule for the channel and it’s expert Emerson, founder of the Investigative Project on Terrorism. As a result, the hashtag #FoxNewsFacts began trending across the globe, poking fun at the news channel; while a protest against Fox News was held in the city itself.

(Visited 49,061 times, 1 visits today)
https://www.iambirmingham.co.uk/2018/05/31/fake-news-story-birmingham-muslims-gone-viral-wrong-reasons/https://www.iambirmingham.co.uk/wp-content/uploads/2018/05/Fake-News-of-Birmingham-Muslim-gang-car-attack-but-really-Switzerland-football-hooligans-08-800x500.pnghttps://www.iambirmingham.co.uk/wp-content/uploads/2018/05/Fake-News-of-Birmingham-Muslim-gang-car-attack-but-really-Switzerland-football-hooligans-08-300x188.png2018-05-31T23:16:11+00:00Staff ReporterBrumFeedCommunityCrimeMediaNewsPoliticsRacismStreet LifeVideosWorldalt-right,attacking cars,B'ham,Birmingham,Birmingham Muslims,Channel 4,Facebook,fake news,false,false news,far-right,footage,football hooligans,Media,Muslim gang,Muslims,Muslims attacking cars,news,Ramadan,Ramadhan,right-wing,road,Social Media,Swiss,Switzerland,Twitter,Video,Viral,Viral VideoA fake news story and video about 'Muslim gangs' in Birmingham has gone viral all around the world, despite the individuals in the footage not being Muslim or from Birmingham. Not only was the footage not filmed in Birmingham, it isn't even from the UK. Yet, that hasn't stopped it...Staff ReporterStaff Reporter[email protected]AdministratorI Am Birmingham
« Palestinian sniper victim artwork appears overnight in Digbeth, Birmingham
Sutton Coldfield Food Festival brings foodie feast to Royal Town »