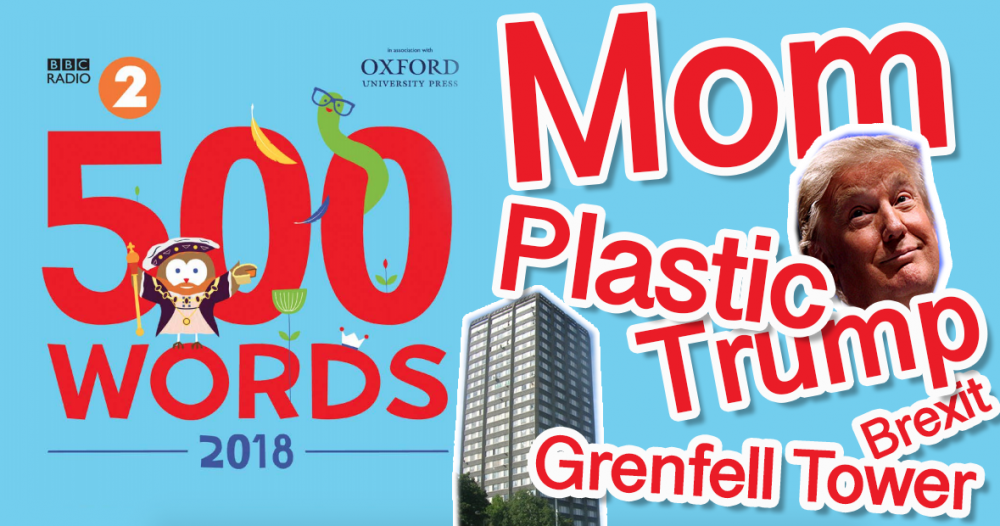 Words including 'Plastic', 'Trump', 'Grenfell Tower' and 'Brexit' have been used heavily by young people in stories, with 'Mom' being the most popular word used by children in the West Midlands

Following OUP’s analysis of the 134,790 short stories submitted to the 2018 BBC Radio 2 Chris Evans’ Breakfast Show’s 500 Words competition, British children have once again shown themselves to be fabulously inventive, funny and socially astute; with the ‘Mom’ topping the list in the West Midlands and ‘Plastic’ leading the way nationally.

Plastic is the Oxford Children’s ‘Word of the Year’ because of its significant increase in use in 500 Words, the awareness and passion children demonstrated for environmental issues, and the creative solutions to combat them that they invented in their stories. This demonstrated the huge impact David Attenborough’s Blue Planet II had on the nation’s children.

Correspondingly, use of the terms recycle and recycling each have also increased by more than 100%, as have packaging, pollution, plastic bottle, plastic bag, and plastic waste.

Biodegradable and permeable entered the stories for the first time and the word ocean, and many of its real or imagined inhabitants (whale, dolphin, turtle, shark, penguin, octopus, and of course, mermaid) also saw marked rises. The phrase litter picking appears for the very first time.

“Language empowers children, giving them a voice to express their passions and opinions, which they have put to powerful effect in this year’s Radio 2 Breakfast Show’s 500 Words competition.

“Children have shown they are acutely aware of the impact plastic has on our environment and how it will affect their own future. They have used their stories to devise imaginative ways to combat this issue and bring about change in their world.”

Alongside social and political issues, playground trends proved to be fertile ground for young imaginations. In 2018 it’s all about slime.

There is a 96% year-on-year increase in references to the craze for making and playing with this squidgy, gooey material made from various ingredients, including PVA glue, bicarbonate of soda, food colouring, shaving cream, and contact lens solution.

As a slither-off of the slime effect, kids also use bucket, pot, blob, trail of slime, slime monster (in video games) in their stories.

Among mythical beasts, unicorns are still the favourite subject by a fantasy furlong. The horned horse appears over 20,010 times in this year’s competition, with 85% of the mentions coming from girls, mostly aged 5-7.

Children also use language creatively to invent their own unicorn words (“Worrycorn: a unicorn with a great gold mane, and a sparkling pink unicorn horn bright enough to melt an ice cream in a freezer that can ‘record all your worries and make them disappear’”).

The most mentioned game is Minecraft, with Pokémon next in popularity. The new arrival in 2018 is Fortnite (63% of the mentions coming from boys and mostly from children aged 9–10), and children also used associated vocabulary including XBalanque, Tilted Towers, llama, and even the game’s currency V-bucks.  Children have also used gameplay to inspire adventurous narratives and build imaginative worlds.

This year’s entries also sees the gamification of social media, with an increase in the mentions of ‘streaks’ where Snapchat becomes a game of popularity: “’Oh no! No Snapchat, Instagram or Twitter for ages! I’m going to lose my streaks on Snapchat! I can’t even talk to Mam or Dad!’ moaned Jess.” (The Nightmare of Siblings, girl aged 12).

Social media has always featured heavily in the 500 Words stories, and 2018 is no exception. The word story has also increased in usage – and is now used in the context of a Snapchat or Instagram ‘story’. Girls aged 10-13 mention social media in their stories more than any other group.

Last year, thousands of children used language in clever, witty, and subversive ways related to the US President, making Trump the 2017 Children’s Word of the Year. Fascination with ‘The Donald’ shows no sign of abating, and he takes the top spot for famous people mentioned for the second year in succession. Santa and Cinderella remain the most used fictional characters as in all other years of the competition.

Once again, vocabulary associated with Donald Trump (president, White House, fake news, and wig) featured strongly. There were also many inventive creations inspired by ‘trump’, such as Snozzletrump, Pinetrump and Snuffletrump.

Emotive writing on Syria, the plight of refugees, terrorist attacks such as the Manchester Arena bombing and school shootings also provide powerful material for stories.

Mentions of homelessness are on the rise with children presenting an empathetic imagining of the experience of living on the streets.

The tragedy of Grenfell Tower is also hauntingly portrayed in a number of stories. Such stories illustrate that youngsters will not shy away from traumatic events; rather they will try to understand them and confront them in a thoughtful and sensitive manner.

Of the political words/names which have grown most in frequency of use since 2017, Brexit tops the list with an increase of 182%. It is mainly mentioned as an item on the news, or as a boring topic of conversation.

Football is one of the most popular topics (particularly with 7-8 year-olds) with 70% of the stories coming from boys, but girls dream about starring in football too. Ronaldo and Messi have been in the 500 Words writers’ top names for footballers every year.

Neymar has appeared in the top 10 for two years running while Salah is a new entry in the stories in 2018 – the top mentioned British players are Harry Kane and Wayne Rooney. Liverpool, Man United and Man City are the most cited football clubs.

The top 10 names of famous people used in stories include as usual some sports and historical names. Donald Trump is number one, followed by Ronaldo, Messi, Hitler, David Walliams (his first ever Top 10 appearance), Neymar, Usain Bolt, Queen Elizabeth, Cleopatra, and Queen Victoria. Favourite singers (in order of popularity in stories) are Little Mix, Ed Sheeran, Ariana Grande, Justin Bieber, Olly Murs, and Taylor Swift, with the latter’s tune Shake it off the most mentioned song.

Chris Evans commented: “Plastic is a fantastic Word of the Year! It really shows just how incredibly engaged with and how much the young people in Britain today care about the world around them. The OUP’s 500 Words analysis is always fascinating and so insightful about the creative ways children use language.”

Lewis Carnie, Head of BBC Radio 2, added: “Every year I am enlightened and amazed by the findings of the OUP’s research into the language, humour and imaginations of the children who enter Radio 2 Breakfast Show’s 500 Words competition. And for 2018 we received yet another record number of entries – 134,790. I’m thrilled 500 Words has inspired so many children to write their wonderful stories.”