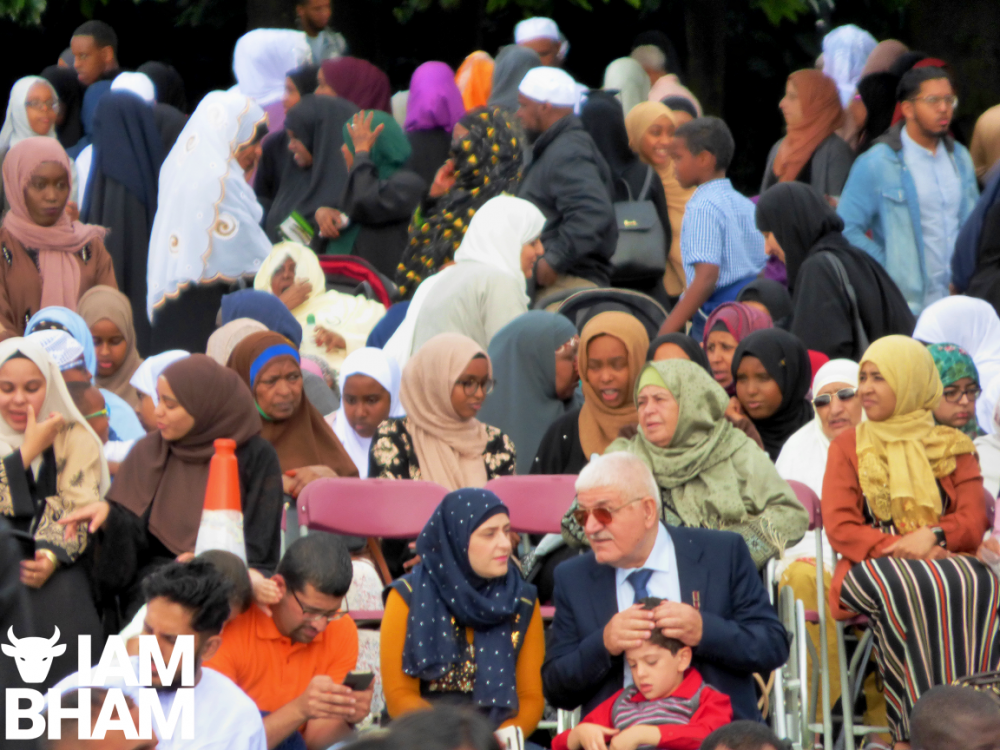 Thousands of worshippers congregated in a Birmingham park today to mark the start of Eid celebrations.

The rain held off and the atmosphere was vibrant and exciting as people flowed into Small Heath Park for outdoor prayers to mark Eid al-Adha.

The prayer services in the park rang in the start of a three-day festival which consists of family festivities, feasts, gifts and cultural celebrations.

While most Muslims began observing Eid al-Adha from today (Tuesday 21 Aug), some are beginning their celebrations on tomorrow (Wednesday 22 Aug), with festivities ending on 25 and 26 August respectively.

The exact date of Eid al-Adha changes every year depending on the sighting of the moon, as the Islamic calendar is based on the lunar cycle.

Eid al-Adha follows Eid al-Fitr which took place in June and marked at the end of Ramadan. Also known as ‘The Festival of Sacrifice’ or informally ‘Big Eid,’ this week’s festival marks the end of the Hajj pilgrimage – one of the five pillars of Islam – and is regarded as the more prominent of the two Eids.

In Small Heath Park, long lines of neatly laid plastic sheets covered the grass and the rows filled up as attendees arrived from all over the city, and from different parts of the country; displaying a real mix of cultural diversity.

As the prayer started, the clouds parted and the sun came out to shine across the park. The shadows lifted and the park lit up with a glorious light. The area was dotted with people all lined up with heads bowed as the Imam led the prayers. A hush fell across Small Heath Park and the sounds of the prayer drifted over the worshippers. It was a very humbling and peaceful sight to see thousands of people all standing together peacefully as they prayed and reflected upon the meaning of this holy day.

The khutbah, the traditional sermon at the climax of the prayer, covered topics that are currently still hitting the headlines. The fear of Islam, the loss of religious freedom across Europe, the burka ban in some countries, and the importance of community and unity in these troubled times where some politicians are dividing the people with speeches that cause hurt.

After the prayer concluded, people hugged each other and families made their way over to the picnic and play areas with their children; where a fun fair was in place for an afternoon of entertainment.