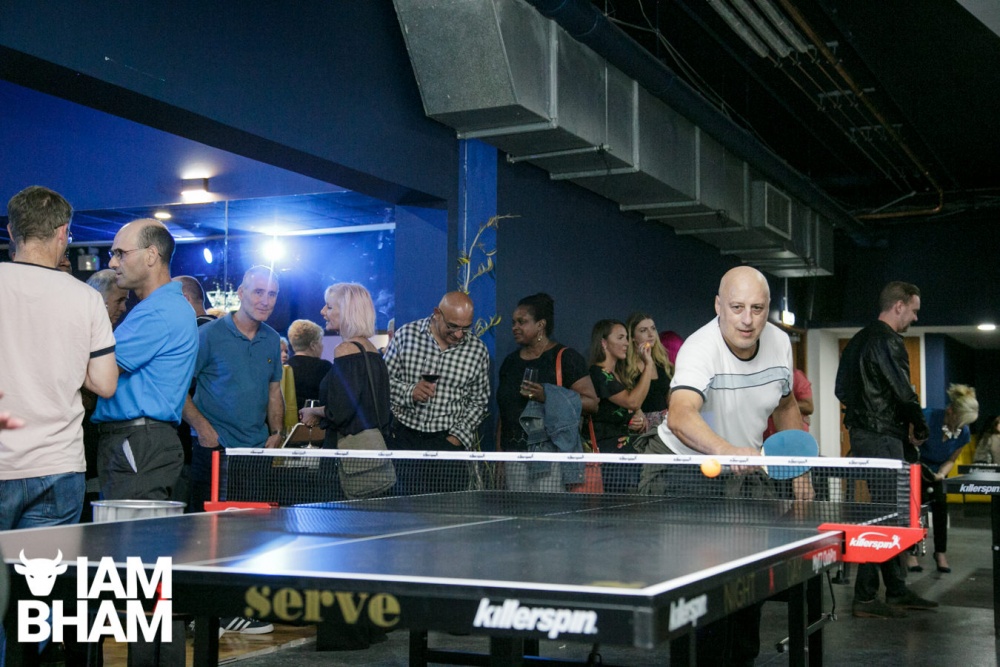 Serve Birmingham is a new bar and eatery which showcases ping pong as its main attraction (Photo: Lensi Photography)

Serve is a new venue that has opened in the prime location of Temple Row in Birmingham, its USP is food, drink and… Ping Pong!

We went to the VIP opening to see how this works.

The attendees of the launch were very mixed, everyone from university and college students, all in very casual clothes; to corporate types who had just left the office in suits or heels.

It will be interesting to see how these very different and diverse groups blend in the following weeks, and how the venue can truly cater for all.

Recognising this, we asked General Manager Yuki Tang who their clients were, she told us:

“If you see who is here today, normally it’s corporate clients. However, we have a lot of young people and families, so it’s whoever wants to have a lot of fun!”

I was not quite sure what to expect. The promotional flyer showed ladies in evening dresses and trendy bearded men in suits. But then, we would be playing a sport; so surely need more comfortable and safe clothes? But then, it would also be a night out so this was all a little confusing, and had already caused a debate as to what we’d wear before we had even set off!

The venue itself looks a little like a snooker hall, with tables placed in groups in all the main areas, and bar nearby. It had a ‘university union’ feel about it to me, with the tiled flooring, tables and bar seating around the walls.

We entered the venue by walking down two short flights of stairs, although there is also a lift.

Music was playing loud, which gave it a nightclub or wine bar kind of feel. It was mostly R&B while we were there, the type of music I would attend a club to listen or dance to. There is also a VIP smaller room, with the same concept but smaller.

Some people were drinking and chatting to friends, from time to time balls would fly across in the air, or roll across on the floor, and guests would bat or kick them out of the way before staff got to retrieve them and place them back in the ball basket next to each table.

There was no food on for guests at the time we arrived, so we didn’t get to sample any, but I did think, I am not sure I would want a ball flying across in the direction of my plate when eating. Maybe I’m just being particular!

Lots of female attendees were playing in heels, and maybe it’s the mother in me but I could not help but think I was waiting for a twisted ankle incident. There was not any type of safety briefing about this on entrance or signs up about footwear, but this could have been because it was the VIP opening night.

Coupled also with the stray balls, I winced a few times at what looked like it was going to be a near-miss as far as a slip up in heels or dress shoes was concerned.

The date for the opening was changed, and this may have reflected on how finished the venue was, there were parts that seemed a little unfinished.

Lots of people were playing and having a great time. Some people were drinking, some were dancing. I thought about what situations I would attend a place like this. A casual afternoon out with friends? Yes. I would already be in trainers and most likely jeans, it would be something to do that was active, like rock face climbing etc.

As a place to have a drink before a night out? No. I would be in heels and maybe a dress, and I don’t think I would feel comfortable in that environment wearing those, and I would not risk playing a sport in heels and a nice dress.

As a place to have a drink after work? Yes and no. If I wore a suit to work, then no, playing a sport in a suit can have problems!  If I went to work causally, then yes.

A place to have an informal meeting? No. The music volume would prevent this.

A place to bring my young nieces for a family day out? No – the aesthetic environment seems too adult-themed for a family fun day, even though nothing ‘adult’ in nature was specifically happening.

While there, we asked General Manger Yuki Tang a few more questions,  such as why Birmingham needs a venue like this? She told us, “This is the ‘Second City’ and it does not have a Ping Pong venue, London does, but not Birmingham, so why not?”

It also seemed to me that this was very similar to Ghetto Golf in Birmingham’s Custard Factory, in terms of bringing a sport not usually associated with a city centre or inner city environment to a new group of players, so we put that to Yuki.

“Yes and no,” was the response.

“I’m not sure how other people are doing it but what we are doing at Serve is, ping pong, cocktails and fast food, we serve a lot of sharing food.”

So there you have it. It will be interesting to see how Serve plays out in the following weeks and months, who settles in as the regular customers and if my health and safety concerns are unfounded! I wish them well.