BBC Digital Cities is back in Birmingham for multimedia skills showcase 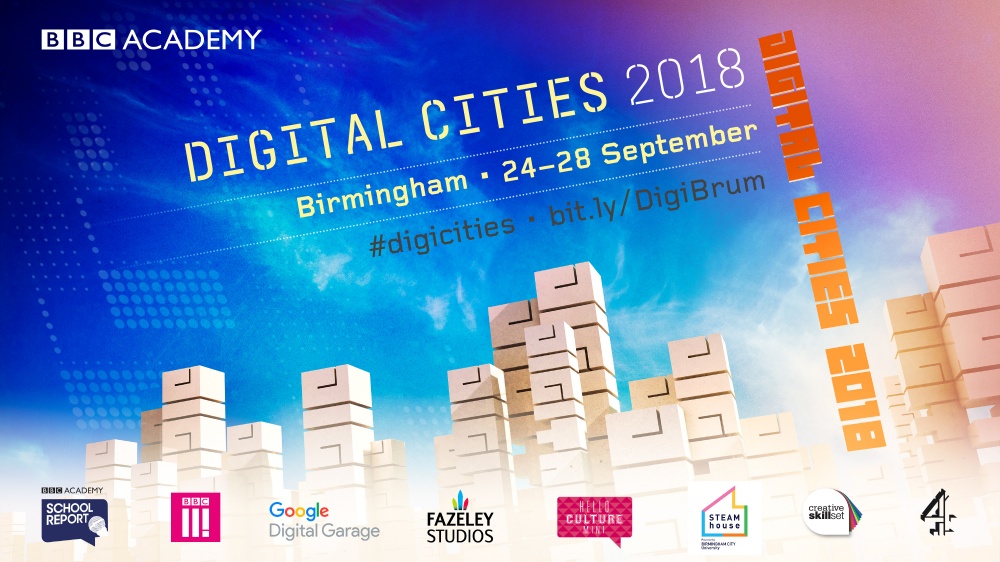 BBC Academy’s Digital Cities is returning to Birmingham from 24th September for a week of masterclasses, workshops, screenings and exciting innovations in the digital sector (Image: BBC)

BBC Academy’s Digital Cities is returning this month, with a series of masterclasses, workshops and networking opportunities, for those looking to thrive and learn in the digital sector.

The exciting week-long event kicks off on the 24th September and includes a special day focusing on BBC Three’s presence in Birmingham on Thursday 27th September.

Do you have a burning desire to write compelling drama or comedy for social media? Want to learn how to use your phone to create broadcast quality video? Or maybe you’d like to get hands-on with the latest Apps that can transform your video shorts into professional looking attention grabbers – Digital Cities Birmingham has all this to offer and more.

A Digital Skills Day kicks off the week at The Bond on Monday 24 September, with the aim of developing skills in the region around digital content making. The event on Fazeley Street will feature experts behind short form content for BBC Three and BBC 1Xtra, livestreaming influencer Amrit Singh and producer of the Birmingham Podcast Festival, Mark Steadman. Local lifestyle blogger, Ting, who runs her own blog will also be talking about her own experience and giving advice on becoming a successful blogger.

“I’m really pleased that Digital Cities is returning to Birmingham this year. With our brilliant set of partners, who represent much of the amazing talent within the digital sector in Birmingham, it’s going to be a really exciting week. There’ll be masterclasses, workshops and networking events, delivered by the BBC and our partners’ right across the city.”

The BBC Three Day on Thursday 27 September will be a day full of digital creativity, screenings and masterclasses. The line-up includes a screening of BBC Three documentary Ellie Undercover followed by a Q&A session with its investigative journalist, Ellie Flynn, who shares the tricks of the trade.

There will also be a masterclass from BBC Three controller Damian Kavanagh and his team, looking at how the channel commissions and how to pitch your ideas to them. For short form film enthusiasts and budding producers, BBC Three’s award winning Amazing Humans production team will also be sharing how to get your films on BBC Three.

Other events during the week will include a ‘Digital in the Arts’ themed conference at Fazeley Studios, a specialist hack day hosted by the innovative technology hub at SteamHOUSE and a showcase of the work of Gallery 37 and Punch Records’ Back-IN young film-maker cohort, hosted by award winning filmmaker Daniel Alexander at The Everyman Cinema.

BBC Writers Room, Google Garage and BBC Academy will use digital innovations to teach how short form content can be created, branded and promoted all online using smart phones and social media platforms.

Shirley Benson, Project Lead, BBC Academy: “This year’s Digital Skills day is firmly aimed at those young content creators who want to develop their skills around writing, filming and broadening their digital horizon’s. Whether you are a blogger, podcaster, wannabe YouTuber or want to learn more about building your brand or business with social media then this Digital Cities day has something for you.”

The Established Birmingham arts, digital and cultural conference brings us HelloCulture: Remix in collaboration with The Arts Council and Cultural Curator, Lara Ratnaraja.

Lara Ratnaraja, Programme Curator: “Hello Culture: Remix is delighted to be part of BBC Digital Cities. It is a natural fit for a programme that aims to inspire how the arts can embrace digital to create more exciting, inspiring and engaging content for their audiences. With such a dynamic and vibrant week long programme we are looking forward to showcasing some innovative new ways of creating work to new audiences.”

The newly opened £5 million state-of-the-art collaborative space for businesses, artists and academics based in Digbeth, will be running a day of speakers and workshops focusing on Digital and the Arts.

Clayton Shaw, Programme Manager, STEAMhouse: “STEAMhouse is all about bringing together people from different backgrounds to maximise their opportunities for creativity and innovation. We look forward to welcoming you to STEAMhouse during BBC Digital Week to find out more about what’s on offer.”

Ammo Talwar, CEO Punch Records said: “Our showcase will premiere cutting edge short films from our Back in Cohort. We’re privileged to have local stalwart Daniel Alexander (Co-producer of Back In) sharing his journey alongside Director and filmmaker Femi Oyeniran, and producer and podcaster Annika Allen.”

BBC Three day will provide masterclasses and screenings, followed by Q&A sessions with the likes of Ellie Flynn, investigative journalist and Damian Kavanagh, BBC Three Controller, where you can discover what it takes to make and produce short-form content.

School Report Day will give young people from around the region the chance to learn new digital skills such as advanced filming/editing on your smartphone, coding and gaming. As well as learning how to build their media knowledge through Fake News workshops and a tour of how TV/radio works on the BBC tour.

Sukhi Nagra , Senior Training Advisor: “BBC School Report day gives young people an insight into the creative industries and the range of opportunities open to them. From broadcasting to virtual reality, its focus is to develop their skills for the future.”

For more information and to book your FREE tickets, go to: bit.ly/DigiBrum.
For tickets to events for BBC Three day on Thursday 27th September, visit: http://www.bbc.co.uk/showsandtours/