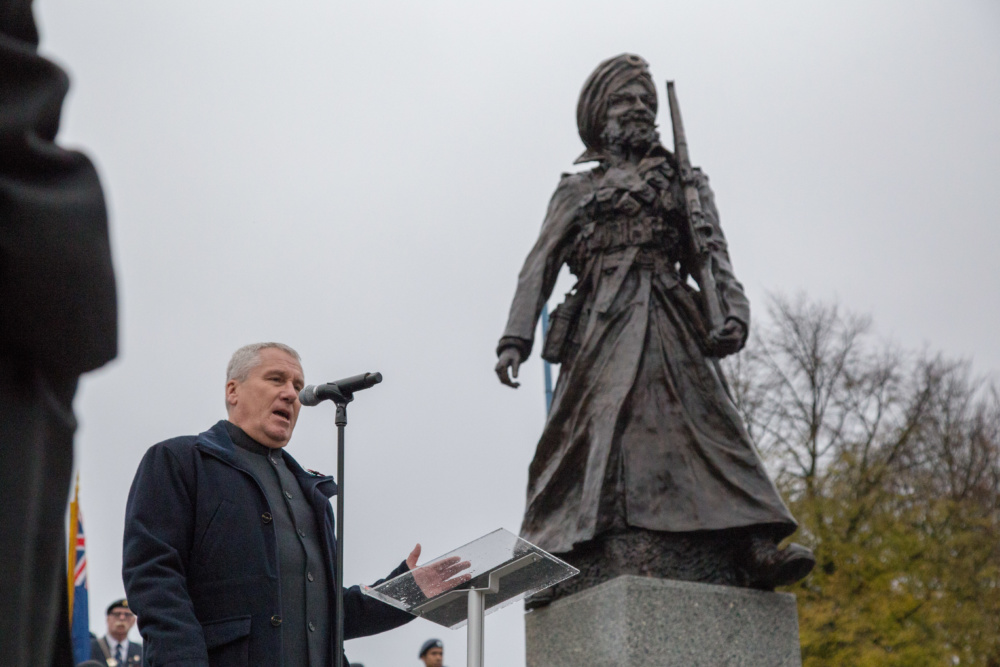 Leader of Sandwell Council Steve Eling addresses the public in front of the new Lions of the Great War statue in Smethwick (Photo: Ranjit Dhillon / I Am Birmingham)

A bronze 10-foot high statue of Sikh soldier has been unveiled in Smethwick, to honour over a million Indian soldiers who contributed to the Allied war effort during WWI.

Hundreds of members of the public, as well as army and local government personnel, gathered to witness the grand unveiling of the prestigious monument.

The procession began with a commemorative parade down Smethwick High street, followed by a minute’s silence to honour fallen soldiers and speeches from those who had played a major role in creation of the monument.

Mayor of Sandwell Councillor Joy Edis and Lead Councillor of Sandwell, Steve Eling, along with soldiers from 159 Regiment Royal Logistics Corps were also present at the unveiling.

The 1o-foot high statue stands on a 6ft plinth with inscriptions on all four sides. These inscriptions include recognition of the centennial anniversary of the end of the Great War and the role of Sikhs in the British Army and wider society.

The monument began as an idea from sculptor Luke Perry after being inspired by his wife’s academic research into World War One.

Speaking to I Am Birmingham, Luke explained: “What struck me is the amount of soldiers in the Indian sub continent who patched up the Western Front… and the amount of contributions they gave and the sacrifices they made and how it’s completely unrecognised.”

He then set out to bring recognition to the fallen soldiers of the commonwealth and the idea was keenly accepted by Guru Nanak Gurdwara in Smethwick, who agreed to fund the costs of creating the monument.

The statue has been forged in a studio in the small hamlet of Acton Round in Shropshire. Many months of arduous work along with co-sculptor Paul Kennedy have led to the stunning complete statue, which stands proudly today in Smethwick.

“All soldiers of all faiths, of all countries and all ranks who laid down their lives in World War One.”

He went on to highlight the legacy the statue would leave and how it will be seen as landmark welcoming visitors as they enter Smethwick.

John Spellar, MP of Warley, paid tribute to members of the Sikh faith describing how it was, “A proud day for Sikhs, not only from Sandwell and the West Midlands but all those from around the world.”

The statue has had huge backing from the first UK female Sikh MP, Preet Kaur Gill. She told I Am Birmingham that she she was contacted by Luke Perry with his idea and connected him with Guru Nanak Smethwick, who were also thinking of creating a monument in the space across the gurdwaras.

The Edgbaston MP has her own personal connection to Indians who fought in the World Wars and shared her own grandfather fought in World War II and the contribution he made to the Allied front in Burma.

The statue is located in Smethwick High Street opposite the Guru Nanak Gurdwara Smethwick.