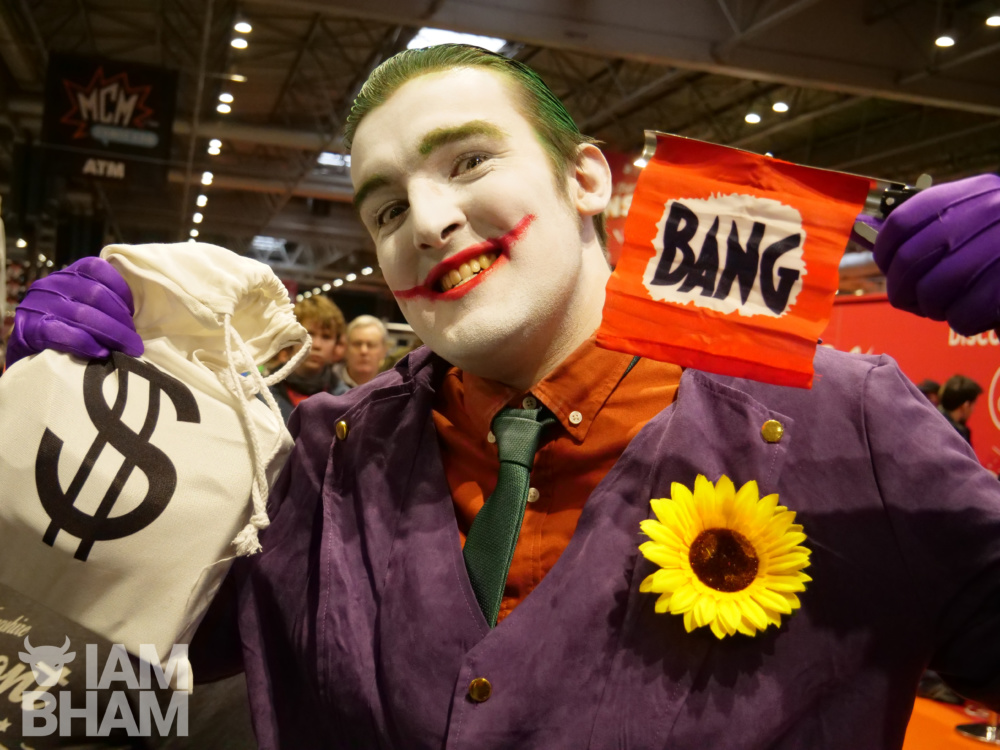 But it’s not all about the celebrity and memorabilia guests, paying homage to everything from Star Wars, Star Trek and Disney to the DC and Marvel universes are hundreds of fans in stunning cosplay, a huge range of gaming, merch and comic book stands, games, gaming, children’s activities as well as enough entertainment and family fun for all.

We’re at the event all weekend, and will be catching up with attendees, special guests and getting a feel for the fun-packed two-day extravaganza.

We’ll be posting regular updates from MCM Comic Con here, so do keep checking in for photos, videos and more!

We’re back at MCM Comic Con for Day 2 of the all-weekender! More photos and updates on their way…

Believe it or not, this is young Begoña F. Martin from Spain, attending the Birmingham MCM Comic Con as the 1992 film version of Dracula, as originally portrayed by veteran actor Gary Oldman. That is some next-level costume design, such an incredibly good and accurate makeover!

A special tribute to the late comic creating genius Stan Lee has been completely filled with messages of sympathy, support and love. Excelsior!

There’s a whole load of fresh cosplay creations today, including these gems:

We’ve been interviewing and catching up with Ash vs Evil Dead and Suburban Gothic star Ray Santiago, discussing his role in the hit shows, his acting journey and the importance of representation int he media industry.

We’ve been catching up with Doctor Who and The Walking Dead star David Morrissey, who’s here all weekend.

There’s no let up on the cosplay, with even more costumed creations on display throughout the halls hosting MCM Comic Con this weekend. Check out these beauties…

There’s rows and rows of original and enticing merchandise and comics stalls, with illustrators and artists on hand to draw members of the public too. With the festive period fast approaching, gift stalls are proving hugely popular today.

Star Wars garrisons are parading around the NEC, with stormtroopers and droids shining under the venue lights. The George Lucas franchise is always popular at Comic Con events across the world and Birmingham’s MCM gathering is no exception.

We’ve been running around and grabbing photos of more cosplay enthusiasts. There’s a lot of classic favourites on show like Superman and Batman, as well as a lot more contemporary characters including Rick & Morty and Princess Bean from Disenchantment.

Gaming is popular at MCM Comic Con with stalls, stages and booths dedicated to popular games and interactive gaming tournaments.

Cosplayers are out in full force today, with loads of awesome costumes paying tribute to TV and film stars, comic characters and gaming legends.

Here's only a small part of one of the NEC halls being used for #Birmingham @MCMComicCon today… pic.twitter.com/iivkP1sD2c

The MCM Comic Con is open! With early-bird ticket holders entering from 9am, while others will be making their way into Hall 20 from 10am.

Here’s the official show guide for this weekend’s proceedings, with a special cover illustration featuring the Library of Birmingham, created by artist Anna Hollinrake who is here at the show at table CV69. Check her out if you get a chance!

MCM Comic Con is on at the NEC Birmingham on Saturday 24th and Sunday 25th November between 9am and 5pm.