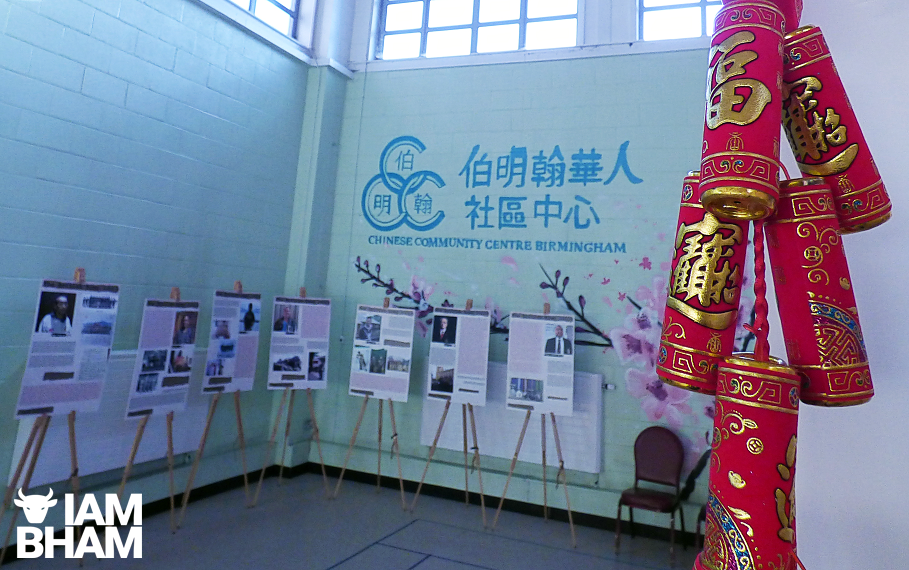 An exhibition opens to highlight the contribution of the Chinese Labour Corps in the Great War (Photo: Rangzeb Hussain)

The Chinese Community Centre-Birmingham is commemorating the forgotten men of World War I – the Chinese Labour Corps – in an exhibition being held to coincide with Chinese New Year.

A long forgotten aspect of the First World War has been brought to light in a new exhibition that is currently on display in Birmingham.

The Chinese Labour Corps (CLC) played an important role by clearing the battlefields after hostilities ended. This also included the task of removing unexploded bombs and locating bodies of dead soldiers in the trenches.

The CLC was a force of workers recruited by the British government in World War I to free troops for front line duty by performing support work and manual labour. The French government also recruited a significant number of Chinese labourers, and although those labourers working for the French were recruited separately and not part of the CLC, they are often considered to be so.

In total, some 140,000 men served for both British and French forces before the war ended and most of the men were repatriated to China between 1918 and 1920.

The new city exhibition in aims to educate and inspire by sharing the histories of these men.

“In November 2018, Britain commemorated the end of World War I with events across the country. One group consistently overlooked was the Chinese Labour Corps – 140,000 volunteers from mainland China who were sent by the Chinese government to support the British and French armies on the Western Front.

“While hostilities ceased in November 1918 and troops returned home, the CLC remained behind to clear battlefield debris with the final units not leaving until September 1920, almost two years after armistice.”

By the end of 1917 there were 54,000 Chinese labourers with the British Imperial forces in France and Belgium.

The workers, mainly aged between 20 and 35, served as labour in the rear echelons or helped build munitions depots. They were tasked with carrying out essential work to support the frontline troops, such as unloading ships, building dugouts, repairing roads and railways, digging trenches and filling sandbags.

Some worked in armaments factories, others in naval shipyards, for a pittance of one to three francs a day. At the time they were seen just as cheap labour, not even allowed out of camp to fraternise locally, dismissed as mere coolies.

When the war ended some were used for mine clearance, or to recover the bodies of soldiers and fill in miles of trenches. Men fell ill from the poor diet and the intense damp and cold, and on occasion they mutinied against their French and British employers or ransacked local restaurants in search of food. Their contribution went forgotten for decades until military ceremonies resumed in 2002 at the Chinese cemetery of Noyelles-sur-Mer.

The last surviving member of the Chinese Labour Corps, Zhu Guisheng, died in La Rochelle on 5 March 2002 at 106 years old. He had also served in the French Army during World War II

The material for the exhibition includes extracts from testimonies from the men who formed part of the Chinese Labour Corps. Their memories and photographs add a new a narrative to the First World War which is often only seen from a Western perspective by historians.

“We very much hope that Chinese and non-Chinese communities in Birmingham and the West Midlands will come and learn about the contribution and sacrifices made by this group which was made up largely of peasants with some students who wanted to learn about Western ways.”

Who were the Chinese Labour Corps?

Where is the exhibition being displayed?

The exhibition will be on display at the Chinese Community Centre-Birmingham, Bradford Street, Digbeth from Friday 1st to Friday 8th February. It will then be transferred to the Library of Birmingham Spotlight zone on Monday 11th February where it will stay until 1st March.