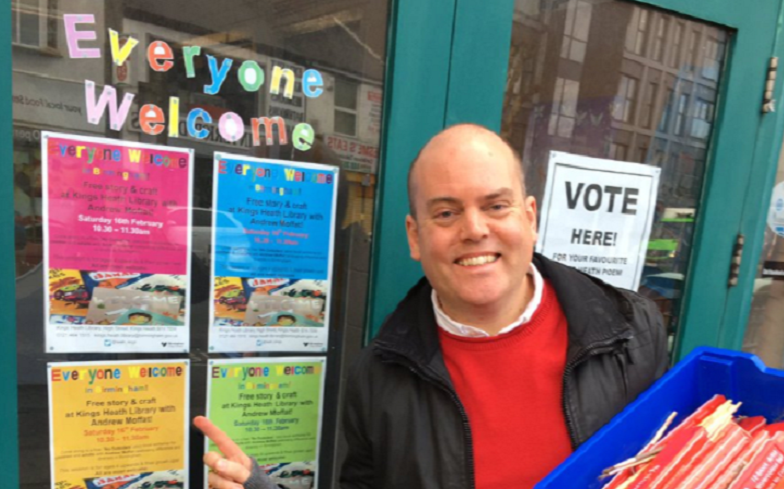 Birmingham teacher Andrew Moffat has been shortlisted for an international award for teaching LGBT+ inclusivity in schools (Photo: Andrew Moffat/Twitter)

A Birmingham teacher at the centre of a row over lessons on LGBT+ rights is up for a $1 million global teaching prize.

Andrew Moffat, assistant headteacher of Parkfield community school in Saltley, is one of ten teachers from around the world to make the final shortlist for the $1m Varkey Foundation Global Teacher Prize 2019.

Moffat has developed an education programme called ‘No Outsiders’ aimed at helping children learn about equalities and tolerance of difference. He has already been awarded an MBE for his work.

He recently came under fire from parents objecting to teachings about LGBT+ rights and same-sex relationships. His school, which serves a predominantly Muslim community, has received 80 formal complaints from parents and there have been a number of protests outside the school gates, organised and attended by conservative Muslim and Christian groups.

Yet, Moffat’s nomination – which was announced by Hollywood star Hugh Jackman – comes as the head of Ofsted has backed the teaching of same-sex relationships in primary schools.

England’s chief inspector of schools, Amanda Spielman told the BBC: “It’s about making sure that children who do happen to realise that they themselves may not fit a conventional pattern, know that they are not bad, they are not ill.”

Speaking about his work, LGBT educator Moffat said: “A big challenge for us is to teach our children that there are different people out there.

“This is a resource that helps school and gives schools a framework through which to teach children that we are all different but actually that’s fantastic.”

Recently, there have been several clashes between local communities and education leaders over the Equality Act in Britain’s schools. Shraga Stern, the Orthodox Jewish activist, warned earlier this year that Haredi Jews would “leave the UK” if faiths schools were forced to teach children about same-sex relationships and gender reassignment.

In a similar fashion, parents in Essex withdrew their children from religious education lessons on Islam and stopped them from visiting mosques on school trips, according to a council report last month. The trend was uncovered in the Thurrock area, a former stronghold for UKIP supporters, that the report described as having “integration issues”. Teachers accused the parents of being ‘racist’.

And a recent survey by the Ozanne Foundation, led by Church of England lesbian activist Jayne Ozanne, found that 458 out of 4,600 people had attempted to “become straight” through conversion therapy. Of those, 91 had attempted suicide; and 22 had been forced to have sex with someone of the opposite sex.

Andrew Moffat has been named as one of the world’s best teachers after facing protests and threats at the school gates over his promotion of equality issues pic.twitter.com/5rPI2rMZwV

“You cannot expect all people to accept the full spectrum of gender and sexual diversity, because that isn’t realistic. You can – and should – expect them to treat LGBT people, and disabled people and ethnic minorities as equal citizens; to protect their rights, and to actively fight discrimination against them.

“The No Outsiders programme seems designed to do just that. On the basis of that, if nothing else, its continuation – and expansion – would, surely, be a good outcome for everyone.”

The education secretary, Damian Hinds, expressed his support for Moffat. He said: “Following last year’s UK win, I’m proud that another three talented teachers from schools in England made the 2019 top 50 finalists, and that Andrew Moffat has made the 2019 top 10 finalists; I wish him the best of luck for the final.”

Following his nomination, Moffat said he was “absolutely thrilled” to be included.

The winner of the global teacher award – who will be stylised as “the best teacher in the world” – will be announced in March at a ceremony in Dubai during the Global Education & Skills Forum.

The other finalists teach in Georgia, Brazil, the Netherlands, India, the US, Argentina, Australia, Japan and Kenya.