OPINION | From Parkfield to Pride and Palestine, we are all entwined 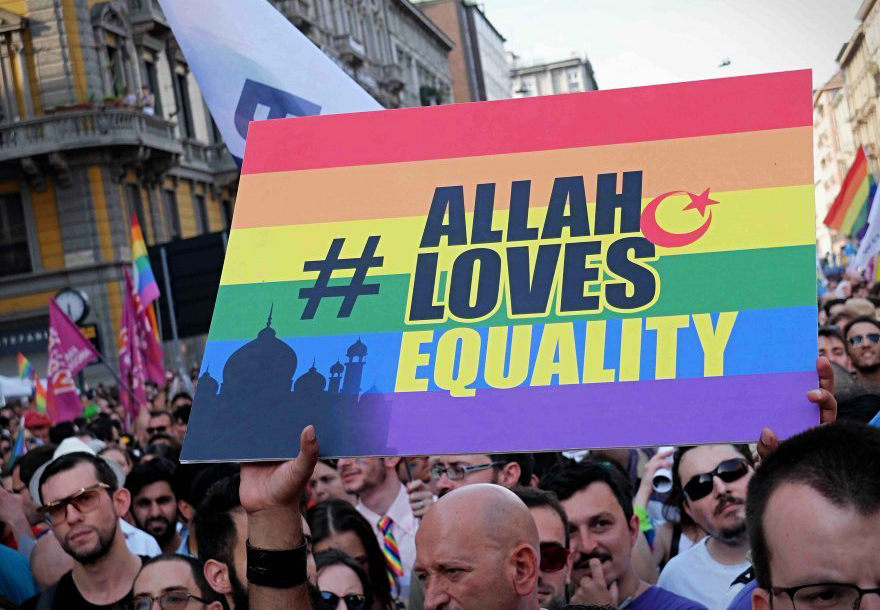 "There is a lack of separation, amongst members of the LGBTQ+ community, between Islam as a faith and how certain individuals in some communities use Islamic teachings and laws for their own homophobic ends" (Photo: ALE/Wajahat Abbas Kazmi)

Over the past few months, the West Midlands, and the UK at large, have been following the developments at Parkfield Community School in Birmingham.

A small, but very vocal, minority of parents have protested at the introduction of “No Outsiders” programme; implemented to teach primary school children about tolerance towards different genders, disabilities, races, and sexuality. Some of the protesters’ main concern was the inappropriate nature of teaching young children about sexualities – despite the programme not providing sex education and Ofsted’s ruling that it was age appropriate.

Unverified and unfounded reports of the school, and several others in its vicinity, subsequently suspending the programme and any discussion of LGBTQ+ issues have since circulated.

What has ensued is a perceived licence for Islamophobia within the media and a small, but again vocal, minority of the LGBTQ+ community. On social media, I read statements such as “Fuck Muslims”, “Fuck Islam”, or “Fuck religion”. While I understand the reason for the sentiment, I reject these crass generalisations that echo those of the initial protesters.

No Outsiders is needed to stem the alienation of and prejudice towards LGBTQ+ youth, a legacy from the devastating implementation of Section 28 under Thatcher that banned any mention of homosexuality in schools. Its urgency stems from the higher rates of suicide within the LGBTQ+ community. However, the media and certain individuals have hijacked this issue to present a false opposition between Muslims and members of the LGBTQ+ community, in attempt to sensationalise (which always necessitates a simplification) what has happened to the point of anger and distrust.

The already existing and persistent problem of racism within LGBTQ+ communities – visible in, amongst other things, dating profiles that demand “No Blacks, No Asians” – has only been fuelled by the media’s framing of what’s happened as a struggle between Muslims and LGBTQ+ persons. This racism which has developed an alliance between far-right politicians and gay spokespersons such as French National Front leader Marie-Le Pen and gay rights activist Sebastien Chenu standing shoulder to shoulder, or Theresa May’s sudden presentation as an LGBTQ+ ally despite her voting record suggesting otherwise.

These politicians, accompanied by the media, portray Muslims and Islam as inherently homophobic, and thus a potential threat to the newly found privilege for the gay community. When in fact, the comments made by Tory MP Andrea Leadsom in support of the homophobic arguments of some protestors show how homophobia is ingrained across society not just within religious or Muslim communities. Their attempt to redirect their violent rhetoric from LGBTQ+ persons to Muslims can only succeed so far.

There is, of course, no denying that homophobia played a part in much of the protests against Andrew Moffat and homosexual relationships, but some parents were also protesting Hazel Pulley, head teacher at Parkfield, and her decision to promote ‘No Outsiders’ as part of Prevent – the government’s racist, Islamophobic, community-destroying anti-radicalisation strategy.

The assumption was that, as stated by Amir Ahmed, one of the protestors, “the school has presented our children as potential radicals,” and that Muslims are “effectively seen as homophobes in the wider community.” The Muslim communities in Alum Rock, where Parkfield Community School is located, are still bruised from the Trojan Horse scandal that saw an outpouring of Islamophobic comments from the media and an intensification of Prevent.

There is a lack of separation, amongst members of the LGBTQ+ community, between Islam as a faith and how certain individuals in some communities use Islamic teachings and laws for their own homophobic ends. Similarly, there is the belief that Islam and other religions, and their believers, are all the same; a homogenous whole, when in fact there is a vast variation in belief and practice within religion.

This view fuels intolerance towards those with faith, but here specifically Muslims, and enables crass generalisations that all religious people are homophobic and thus must be taught, patronisingly, to be tolerant. There needs to be a mental separation between religion and culture, a difficult but important task.

What these lacks show is the collective amnesia of how colonialism and its present legacies have entwined our communities. The repressive erasure of native expressions of gender and sexuality that did not fit into the fixed Western framework of heterosexuality and gender identities in colonised countries – only recently did India revoke its sodomy laws, originally introduced under British colonisation.

The exploitation of young men by homosexual colonisers before the decriminalisation of homosexuality in the West – Oscar Wilde, André Gide, and T. E. Lawrence (a.k.a Lawrence of Arabia), to name but a few, wrote about their sexual exploits with Arab youth. This arguably fuelled resentment towards homosexuals and the belief that it is a “Western disease”. And finally, the rise of an increasingly intolerant and violent version of Islam that is in response to, and at times even funded by, Western colonialism; which is then used to enflame Islamophobia within LGBTQ+ communities.

These similar historical and political entanglements at Parkfield Community School are also in play within the pinkwashing of Birmingham Pride: a propaganda strategy used to conceal human rights violation through the facade of support for LGBTQ+ rights, used by apartheid Israel and complicit corporations. HSBC, the main sponsor of Birmingham Pride, invests over £800 million in companies arming Israel. One company is Caterpillar, that supplies the Israeli military with specifically designed weaponised bulldozers used to demolish Palestinian homes, factories, agricultural land and civilian infrastructure, including water pipes and networks on Palestinian territory assigned by the UN.

In the Israeli state’s pinkwashing campaign, they use LGBTQ+ rights to promote themselves as a modernist, progressive state while simultaneously presenting Palestinians, Muslims, and Islam as barbarous, regressive, and homophobic and downplaying their own homophobia – in a Haaretz poll of the 498 Israeli participants 46% believe homosexuality to be a perversion.

It is no coincidence that this is strikingly similar to how the media, right-wing politicians, and some members of the LGBTQ+ community present what is happening at Parkfield Community School. The nuance-less assumption that Muslims, Islam, and Palestinians by extension (since Israeli pinkwashing flattens the religious complexity of Palestine, its Christian, Druze, atheist and agnostic populations, into a homogenous Islamic entity) are inherently and automatically homophobic is a direct result of the colonial legacies and practices of Israel and the Western world.

As a proud Birmingham queer, I do not want my Pride or my community at large, to be co-opted by racist, Islamophobic, colonial ideologies. Pride was a protest started by two trans women of colour, Marsha P. Johnson and Silvia Romera – something that is again forgotten as the film Stonewall (2015) showing a white man throwing the first brick attests to. LGBTQ+ politics and identity has slowly become depoliticised, Pride has become a party. Now, for some members of the community, LGBTQ+ politics has taken a decidedly sharp turn to right where fear mongering and Islamophobia are in control of the steering wheel.

I do not want my liberation to be at the cost of someone else’s – as Wilde and others had enacted. As Aswat, a queer feminist Palestinian’s group stated: “We, Palestinians, want to send companies and states who pinkwash their crimes a clear message: Oppressed groups know too well that no one will be free unless we are all free, and no group’s rights should be used to cover the violation of any other  group’s rights.” I want to reinvigorate Birmingham Pride and LGBTQ+ politics with its radical roots by calling out Islamophobia within our communities, to demand HSBC be dropped as the main sponsor, and to end pinkwashing.

For this to be done, we need to work within our respective communities and within ourselves. We need to change our assumptions and challenge the violence implicit in those assumptions: homosexuality is not immoral and Islam is not inherently homophobic. To succeed, we need dialogues that are not patronising and reject the colonial power structures and narratives that saturate these issues. These dialogues must not be done in a defence and explanation of one’s humanity, as this draining of energy allows intolerant persons and oppressors to maintain their powerful position and evade responsibility for their actions.

This centring of queer Muslim, and queer Palestinian, voices will also tackle the divisive narrative of Muslims against LGBTQ+ individuals perpetrated media’s framing of Parkfield Community School and the Israeli state’s propaganda campaign. Hence I urge individuals from Muslim and LGBTQ+ communities to look for and support initiatives that foster dialogue and demonstrate that these identities are not polarised. The homoerotic poetry of Abu Nuwas, Hafez, and Omar Khayyam attests to this. This is to say nothing of contemporary examples such as the Inclusive Mosque Initiative, Imaan, and Hidayah in the UK as well as el-Tawhid Juma Circle in Toronto, and the Senin-Kamis School in Indonesia. Or even the West’s only Muslim mayor, Sadiq Khan, who voted for marriage equality (for which he received death threats) and his recent support for ‘No Outsiders’.

What has unfolded at Parkfield Community School has been a hindrance to inter-community solidarity and the local campaigns to end pinkwashing. I am pleased that dialogues are being facilitated between parents, teachers, and activists; and disappointed by some planned, but thankfully cancelled, counter-protests from some members of the LGBTQ+ community, framed through the media’s divisive narrative.

I hope that these dialogues will continue after the Parkfield Community School issue has been resolved so that we can strengthen our inter-community ties and understand the complex layers of our relationships to then tackle larger issues together such as Prevent; the gentrification of Birmingham; and Israel’s Pinkwashing of Birmingham Pride.

Tolerance is not a non-judgemental indifference, which is a cop out, but an active ongoing reassessment of our ideas and actions as individuals and collectives. The political destinies of Muslims, Palestinians, and LGBTQ+ persons are thus entwined in ways that we cannot and should not try to break if we want to see change in our worlds.

(Visited 1,522 times, 1 visits today)
https://www.iambirmingham.co.uk/2019/04/15/opinion-parkfield-pride-palestine-entwined/https://www.iambirmingham.co.uk/wp-content/uploads/2019/04/Photo-Allah-Loves-Equality-placard-1-800x555.jpeghttps://www.iambirmingham.co.uk/wp-content/uploads/2019/04/Photo-Allah-Loves-Equality-placard-1-300x208.jpeg2019-04-16T12:10:13+00:00George ReinerColumnCommunityEducationFaithLGBT+PoliticsRacismWorldAndrew MOffat,Birmingham,Birmingham Pride,Blog,Column,Gay,George Reiner,Homophobia,Lesbian,LGBT,LGBTQ,No Outsiders,Opinion,Palestine,parents,Parkfield,Parkfield Community School,Parkfield School,Pride,Protest,Protests,QueerOver the past few months, the West Midlands, and the UK at large, have been following the developments at Parkfield Community School in Birmingham. A small, but very vocal, minority of parents have protested at the introduction of “No Outsiders” programme; implemented to teach primary school children about tolerance towards different...George ReinerGeorge Reiner[email protected]ContributorGeorge Reiner is a poet, translator, and artist whose work focuses on history, politics, and language.I Am Birmingham
« Brummie hat-trick as actors Lorna Laidlaw, Bharti Patel and Janice Connolly set to appear on prime time TV shows
Teenager hospitalised following brutal assault at busy Sparkhill junction »