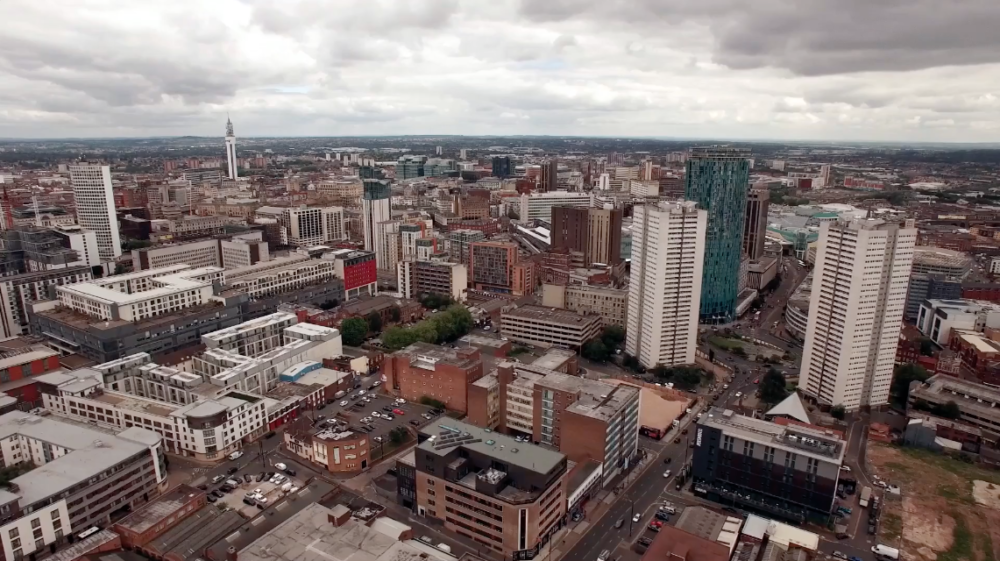 The skyline of England’s second city has increasingly evolved over recent decades as the city continues to redevelop its architectural landscape.

With several buildings awaiting demolition, and many more undergoing building and redevelopment, it’s easy to look over some of Birmingham’s architectural marvels.

If you keep your eye out, you can spot a concoction of architecture of all shapes and sizes, spanning decades, and in some cases centuries, all with their own place in Birmingham’s history.

Heres 10 photos of some of Birmingham’s most iconic architectural marvels:

Methodist Central Hall stands pride of place on the north east corner of Corporation Street marking a gateway into the city centre from James Watt Queensway. The Grade ii listed building bares a striking resemblance to its grade i Victorian neighbour across the road – the Victoria Law Courts.

Despite its original use as a Methodist Church, the three story building has also spent time as a nightclub in the 1990’s before, now, remaining vacant for over 15 years. Thanks largely to the awareness raised by ‘Historic England’, exciting plans for a large hotel have been approved last year by the city council, breathing new life into this wonderful building.

This stand-alone beauty, adjacent to Eastside City Park by Millennium Point, can easily be mistaken for a 19th century brummy answer to the Berlin’s Brandenburg Gate. Though lacking in symbolic value, this grade i listed entrance to, what was once, Curzon Street railway station has has become largely recognised for its artistic value with two of the city’s universities using it for their own different educational purposes.

With the old Curzon Street railway station being demolished, the ornate entrance has been left standing ever since. With HS2 on the horizon and Birmingham city centre needing a location for one of its terminals, this impressive old station entrance was an opportunity not to be missed to blend both a Romanesque classic with a contemporary purpose built station. It will now become a centre-piece of the upcoming HS2 Curzon Street station.

Situated just east of the city centre, what it may lack in platforms and sheer magnitude compared to its New Street neighbour, it more than makes up for in charm. You could be walking through the quaint old ticket hall figuring out which platform you need or someone arriving here by the side of the Bull Ring, either way you’ll marvel at how the station has retained its 1930s style.

Well this feeling of former glory is due to a fine tooth restoration project with the interior décor to give it this periodic feel that and was actually completed as recently as 2010.

As well as the Chiltern Railway service that goes to London Marylebone, this station links up nicely via the Snow Hill Tunnel and on to other locations to the west of Birmingham. Thankfully when Moor Street closed in the late 1980s, the beautiful brick arch exterior did not succumb to demolition and has subsequently been awarded with grade ii listed status.

The 1960s Bull Ring shopping centre divided people as, love it or hate it, it had an iconic brutalism value to it but not without its flaws. However, demolition took place in 2000 to make way for a 21st century replacement. In that time this new Selfridges building was literally kept under wraps and no-one knew quite what was to arrive on the corner of Park Street and Moor Street until the new Bull Ring shopping centre was unveiled and opened to the public in 2003.

Comprising of no less than 15,000 aluminium disks on its blue exterior, this ‘space-age’ design is a sharp contrast to the adjacent St Martin’s Church which takes centre stage outside the Bull Ring – a classic example of old and new together. Just like the shopping centre’s predecessor, love it or hate it, people will talk about it and people will identify it with Birmingham.

Constructed in the 1960s on the corner of New Street and High Street at the same time as its indoor Bull Ring neighbour, the Rotunda was built for offices to locate here. However for large parts of the late 20th century, it was seen as something of a ‘white elephant’ with a noticeable amount of empty space considering its prime location. In 1974, the ‘Tavern In The Town’ pub (which stood at the bottom of this picture) was the scene for one of the two fateful ‘Birmingham pub bombings’.

When re-opened it was renamed as ‘Bar St Martin’ and survived as a pub until the rest of the Bull Ring was redeveloped just after the millennium. This 25 story high cylinder was retained during the Bull Ring transformation and in 2006 refurbishment began over a two year period to transform its interior predominantly into living apartments. The supporting concrete column in the centre does not actually run up to the top floor which means that the top level is able to revolve – 360 degree view restaurant anyone?

Not to be confused with a war-time ammunition factory or the like, this curious looking building can be found on Navigation Street. Despite being situated on the main thoroughfare between Grand Central and the Mailbox, some people may glance at it when passing as a random carbuncle that they are not sure what it is used for. Complete with a façade which you could describe as a concrete Venetian blind, this is actually the former railway signal box for Birmingham New Street station.

In truth, it is not a building you would typically associate with that purpose when you think of those that were used at less urban stations before the centrally controlled units have begun to supersede them. This four storey structure is the only survivor from when the station was revamped in the ‘swinging sixties’. This stand-alone building is one of Birmingham’s myriad grade ii listed buildings, made all the more fascinating as it is now so out of context with the modern day station and its immediate vicinity. Arguably, this piece of architecture remains the best remaining example in the city centre of 1960s brutalism.

Situated on Paradise Street and on the west side of Victoria Square, this superb replica of Roman architecture named Birmingham Town Hall was constructed in the 1830s. The Victorian era was renowned for its engineering but the building of this beautiful concert hall was not without sadness because, as a result of a crane failure, two workers died. In the nearby churchyard of St Phillip’s cathedral, a stump from one of the original pillars can be found as a memorial to the two men and anyone who has died due to accidents in the workplace.

In the mid-1990s, it was closed to the public and following a substantial yet sympathetic renovation, the Town Hall interior was restored to its former glory by 2008, with its famous pipe organ still alive and kicking to this day. Throughout its near 200 year existence, this venue has been host to countless world famous names taking centre stage for varied performances. That proud list includes The Beatles, local favourites Black Sabbath and writer Charles Dickens. Now in the modern era, as well as the contrasting musical performers, it also provides the perfect facility for contemporary events such as company AGMs and university graduations. Both internally and externally, this is a building you could easy make a trip to Birmingham for in itself.

As you walk out of Grand Central onto Stephenson Street or step off the tram at that stop to have a city centre shopping trip, one of the most elegant shopping experiences to be enjoyed in the city centre is diagonally opposite from you in the form of the Piccadilly Arcade. Linking Stephenson Street to New Street, this arcade is still home to some fine independent shops which is always a popular choice for shoppers of a particular pallet.

In addition to that type of retail therapy, when passing through it you won’t fail but to admire the stunning interior which includes five beautiful large ceiling paintings. When this gem was built in 1910, it was initially used as a lavish cinema which amazingly was only in use until the mid-1920s when it was replaced by shops. Piccadilly Arcade has maintained its authenticity with the shop fronts retaining an appearance to depict a period in time. The sloped floor in the arcade is another tell-tell sign, along with the grand looking arch front, that a wonderful old picture house would have originally occupied this building.

One of several modern day classics to depict Birmingham in the 21st century. Opened in 2010, this 25 storey multi-purpose structure on Commercial Street has an imposing presence above the adjacent bars, shops and eateries at the Mailbox. As well as eating, drinking and indeed living, which can be enjoyed at the Cube, this is a curious looking design in itself to marvel at.

This owes much to the white and gold plated cladding which bears some resemblance to giant Tetris pieces. However, The Cube (as its name may suggest) is not technically correct as on the front side it has a cutting towards the top which is part of the internal atrium that leads nicely into the design of the class crown on the top. Inside the glass crown is the restaurant of a world famous chef and, as you would expect, has a fantastic view across the south side of the city with the floodlights at Edgbaston Cricket Ground being an immediate landmark you can point out. Adjacent to this restaurant on level 25, is a bar which offers open air seating by the atrium and equally panoramic views across the north side of Birmingham and beyond.

The Peace Gardens are born out of the former 19th century St Thomas’s Church which was struck in the ‘Birmingham Blitz’ of 1940 with just the tower left intact. The church wasn’t reconstructed after the Second World War and instead the grounds were converted into a public open space as a memorial for those who have died fighting in different conflicts. When the church ruin was turned into the Peace Gardens it coincided perfectly with the coronation of Queen Elizabeth II and has seen further additions as a testimony to peace.

In the late-1980s, the First World War Hall Of Memory was relocated here from Centenary Square in the city centre. In 1995, the gardens were given a make-over in time for the fiftieth anniversary of the end of the Second World War and then just three years later, when the G8 summit was held in the ‘second city’, world leaders all planted a tree to represent their countries commitment to world peace. Now, more than twenty years later, this small relaxing oasis is not just somewhere to unwind less than a mile from the city centre but a poignant setting that you can’t help but reflect on past conflicts. Sitting there as the sun pitches through the church tower, there’s that feeling of inspiration and hope that the world can be a happy and peaceful place to live.