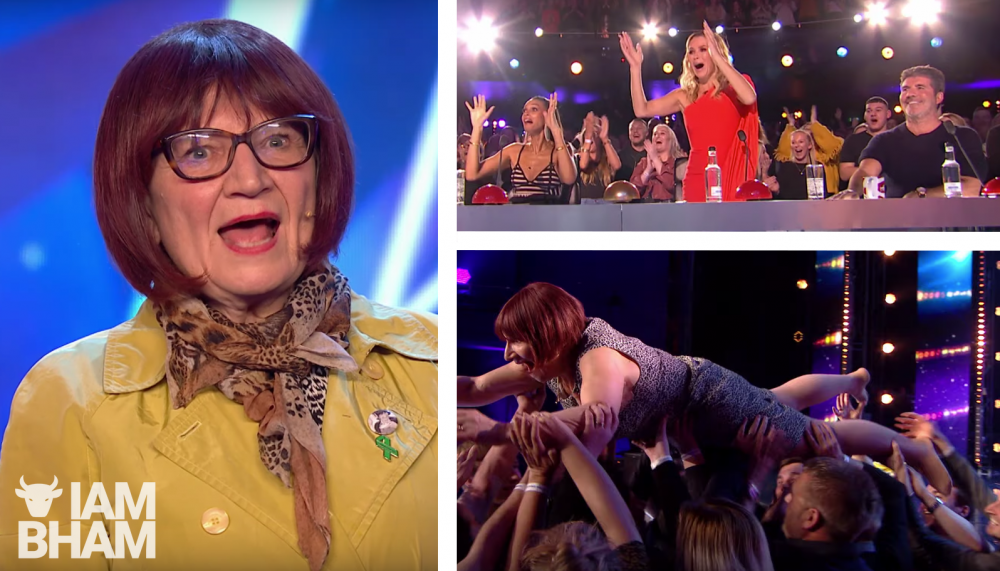 Birmingham actress and comedian Janice Connolly’s famous alter ego Barbara Nice has made it through to the live semi-finals of Britain’s Got Talent, after leaving the judging panel in hysterics following her recent performance.

The Brummie star, who performed as her famous character ‘Mrs. Barbara Nice’ – a caricature of a middle aged house wife who appeared on Peter Kay’s Phoenix Nights – left celebrity judges Amanda Holden, David Walliams, Alesha Dixon and Simon Cowell in a fit of laughter after running through her routine on stage.

Appearing on stage in a leopard-print dress and with several handbags, she told the audience her husband didn’t know she was on the show. Instead, she’d told him she was dog-sitting.

Sharing her views on Simon Cowell’s “nice teeth”, five pence carrier bags and a broken boiler; Connolly’s loveable antics had the audience cracking up before she launched herself onto the judge’s table in a mini-crowd surf that had Walliams, Dixon and Cowell applauding as Holden punched the air in delight.

Her audition was such a success, the judges gave Connolly – and Barbara Nice –  their seal of approval and have asked her to return.

On being selected for the Britain’s Got Talent semi-finals, Connolly said:

“Feeling on top of the world, cause I’ve just gone through to the next round, which is a belter.

“The thing now is I’ve got to think of something even better to do. Get thinking, Barbara!”

The public have have voted for their favourite act each day this week, with a chance for them to vote for Barbara Nice on Friday. The final event is scheduled for Sunday 2nd June at 7.30pm.

Who is Janice Connolly?

Janice Connolly is a British actress, comedian and artistic director. She runs the Birmingham-based group Women and Theatre, and regularly performs stand-up comedy as her character “Mrs Barbara Nice”.

Originally from Manchester, she is now based in Kings Heath in Birmingham and considers herself a ‘Brummie’, after spending her youth in the city studying at the Birmingham Polytechnic, now known as Birmingham City University.

In 2017, Connolly was awarded a British Empire Medal in the New Years Honours list for services to community arts in the West Midlands.

She is also the artistic director and founder member of Birmingham-based Women and Theatre, a company committed to social change through new theatre and drama and in its mission statement states that they “reflect the language and lives of ordinary people, giving voices to those not usually heard.”

Janice Connolly is married and lives with her two children in Kings Heath.

You can catch Janice Connolly on the new series of Britain’s Got Talent on ITV. Her  live performance is scheduled to be aired at 7.30pm on Friday 31st May.