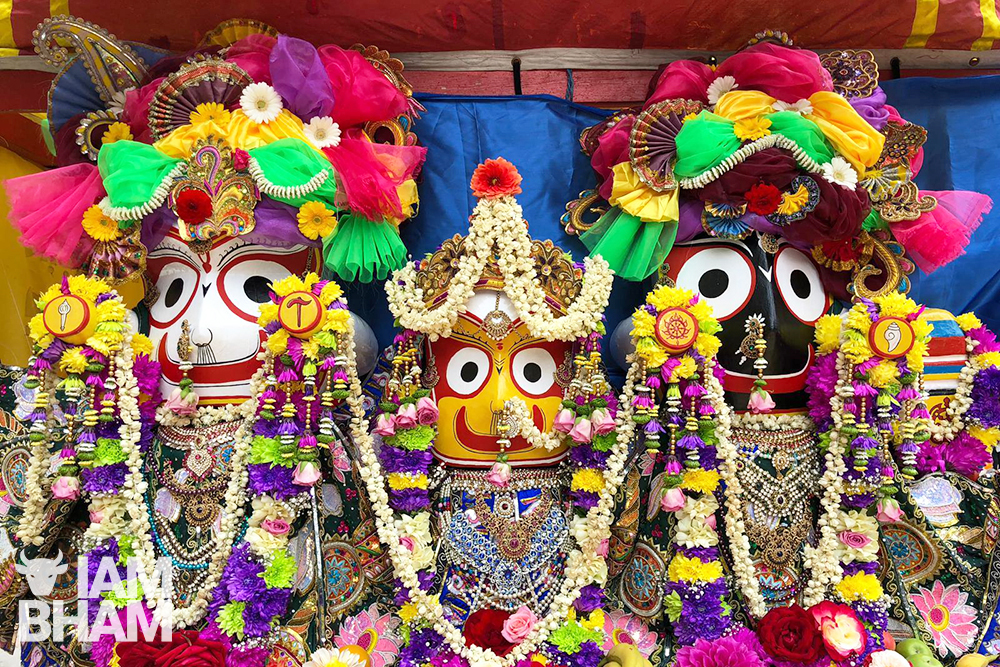 The 19th annual Festival of Chariots, known as the ‘Birmingham Ratha Yatra’, brought an array of colour and sunshine to the city over the weekend, with music, dance, vegetarian food and positive vibes.

The Hindu festival was beaming with smiles and joy as faithful revellers took part in a procession around Victoria Square in the city centre, in an event organised by the Birmingham branch of the Hare Krishnas.

Rathayatra is the International Society for Krishna Consciousness’ biggest street festival. It features huge, wooden chariot pulled by hand in a grand procession. All the way through there is melodious singing, chanting and dancing to rhythmical drums and cymbals. The procession ends with a stage show, a festival and delicious vegetarian prasadam feast.

The 19th Anniversary of the Birmingham Ratha Yatra Festival 2019 was a spectacular event with a city centre procession and festival, incorporating all the exoticness, vitality and colour that is in India. This year, the procession was fortunate enough to be joined by the Lord and Lady Mayoress of Birmingham.

Starting in Victoria Square, the chariot and its followers of worshippers, dancers and musicians proceeded down New Street before turning around and making the journey back again to continue festivities in the square.

The festival parade symbolises Lord Jaganath (Lord Krishna), his brother Balarama and his sister Subdra returning home after a long period away. The return home is celebrated by Hindus across the world.

The original Ratha Yatra is thought to be the oldest street procession in the world. The Birmingham tribute lasted around 90mins before moving onto static celebrations, including a number of stalls selling books, cakes, bags and henna. There was also an opportunity to have some free food, known as ‘Prasadam’.

Here’s 19 photos of the Ratha Yatra festival in Birmingham:

#2  Volunteers creating a path for the parade

#4  Children next to a small chariot

#6  Inside of the Chariot

#7  Procession through the streets of Birmingham

#8  One of the chariots on the procession

#9  Celebrating peace and love with colour

#10  Chariots returning back to Victoria Square

#13  Crowds stop to take photos of the Chariots

#14  A family enjoying the festival

#19  The Lord and Lady Mayoress of Birmingham

Article by guest contributor Sushill Sharma and photographs by Mohan Mayapur, both for I Am Birmingham.