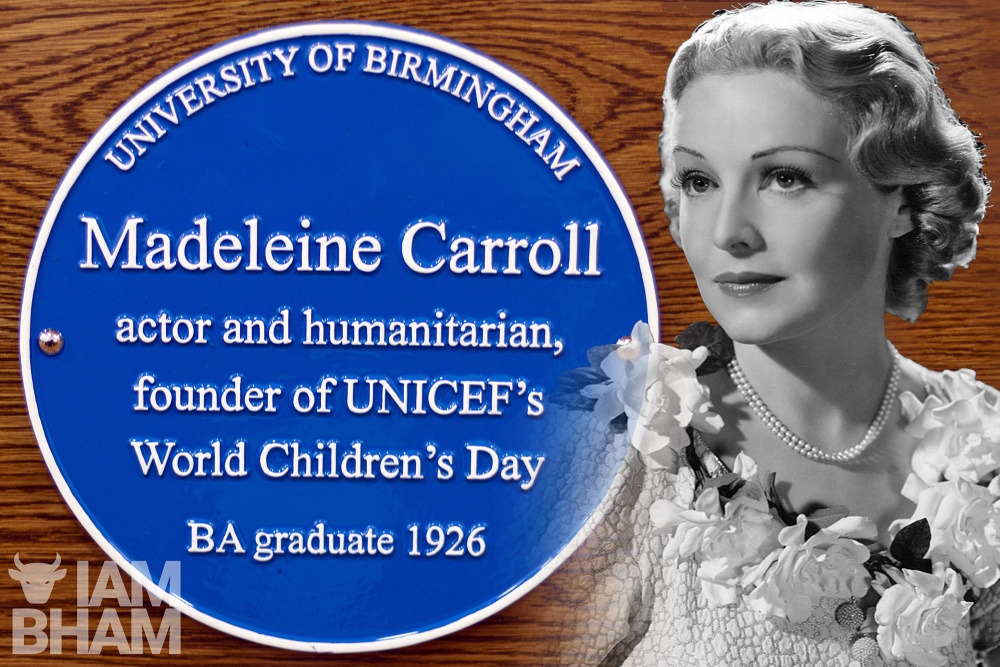 At the peak of her success, West Midlands born Madeleine Carroll was the highest-paid actress in the world, earning $250,000 in 1938

The University of Birmingham has commemorated one of its most distinguished graduates, the actor and humanitarian, Madeleine Carroll, through the unveiling of a new commemorative Blue Plaque.

Carroll, who was born in the West Midlands, graduated from the University of Birmingham in 1926 with a BA in French with Honours. During her studies she appeared in some productions for the University’s Dramatic Society, before later going on to star in films in the UK and in Hollywood during the 1930s and 1940s.

In 1935, West Bromwich native Carroll attracted the attention of Alfred Hitchcock and starred as one of the director’s earliest prototypical cool, glib, intelligent blondes in The 39 Steps.

The success of the film made Hitchcock a star in Britain and the US, and Carroll’s performance established the template for the quintessential English ‘Hitchcock blonde’. Poised for international stardom, Carroll was the first British actress to be offered a major American film contract with Paramount Pictures.

After her only sister Marguerite was killed during the Blitz in World War II, Carroll made a shift from acting to working in field hospitals as a Red Cross nurse and helped orphans of the war and survivors of concentration camps. As a result of this work she proposed a World Children’s Day to UNICEF, which has since been celebrated globally on 20th November each year.

Around 50 people attended the unveiling of the blue plaque at the newly equipped screening room called The Carroll at the University of Birmingham yesterday, followed by a talk on the life and importance of Madeleine Carroll and a commemorative screening of The 39 Steps.

Professor Rob Stone, Co-director of B-Film: The Birmingham Centre for Film Studies from the University of Birmingham said: “We are delighted to able to honour the life and work of Madeline Carroll – for Hers is a rich legacy in both her film and humanitarian work, and it is very fitting that our celebration takes place on UNICEF World Children’s Day, that Madeleine was instrumental in establishing.”

A blue plaque is a permanent sign installed in a public place and elsewhere to commemorate a link between that location and a famous person, event, or former building on the site, serving as a historical marker.

(Visited 301 times, 1 visits today)
https://www.iambirmingham.co.uk/2019/11/21/blue-plaque-unveiled-brum-university-honour-hollywood-star-madeleine-carroll/https://www.iambirmingham.co.uk/wp-content/uploads/2019/11/Madeleine-Carroll-Blue-Plaque-University-of-Birmingham-800x534.jpghttps://www.iambirmingham.co.uk/wp-content/uploads/2019/11/Madeleine-Carroll-Blue-Plaque-University-of-Birmingham-300x200.jpg2019-11-21T15:00:25+00:00Staff ReporterBrumFeedCharityEducationEntertainmentFilmNewsShowbizWomxnActor,actress,Alfred Hitchcock,Alumni,B'ha,B'ham,Birmingham Centre for Film Studies,Blue Plaque,Brum,Brummie,Celebrity,Cinema,Dramatic Society,Film,graduate,Madeline Carroll,Professor Rob Stone,Rob Stone,UNICEF World Children’s Day,University,University of Birmingham,UoB,West Brom,West Bromwich,West Midlands,WMThe University of Birmingham has commemorated one of its most distinguished graduates, the actor and humanitarian, Madeleine Carroll, through the unveiling of a new commemorative Blue Plaque. Carroll, who was born in the West Midlands, graduated from the University of Birmingham in 1926 with a BA in French with Honours....Staff ReporterStaff Reporter[email protected]AdministratorI Am Birmingham
« Police appeal after masked burglars break into Balsall Heath house and steal jewellery
Three convicted of brutally murdering homeless man in Birmingham »