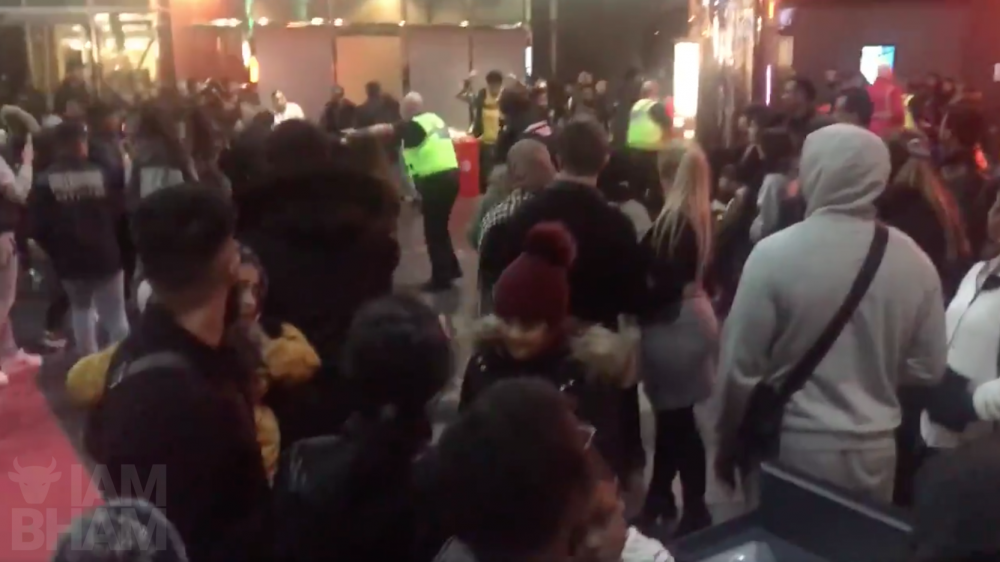 A mass brawl at Star City tonight has caused chaos at the venue and across the city (Photo: Rachael Allison / Twitter)

The Star City complex in Birmingham is on lockdown after reports of a mass brawl at Vue Cinema involving machetes, resulting in police making arrests.

Police and other emergency services arrived at the scene with crowds being evacuated from the cinema mid-way through their screenings.

Armed cops with dogs and tasers are at Vue Cinema in Birmingham Star City, where there are reports of dozens of youths fighting have been shared on social media.

Some reports have suggested young girls were involved and up to “70 people” became embroiled in the fight.

Officers on site have been given powers to move on groups of people and arrest those who fail to leave, as part of am urgent “dispersal order”.

A photo of young men wielding a machete was shared on Twitter shortly after the incident, along with the hashtag #StarCity, but it is not known if the photo is genuine or connected to tonight’s events. I Am Birmingham has blurred out all of the faces featured in the picture.

West Midlands Police officers were called to the Star City complex just before 5:35pm this evening amid reports a group with machetes had arrived at the venue.

WMP said they found aroud 100 people at the complex’s cinema and fighting broke out as they moved to clear the area. Several arrests were made and officers remain at the scene.

One eyewitness said “a young boy was crying on the floor with his mother” as a number of people started fighting.

Although Star City is based in Nechells, the incident has caused chaos on the roads, with traffic at a standstill in Birmingham city centre and warnings of delays of over an hour for drivers. Police sirens can be heard passing throughout the city centre as extra officers make their way to the venue.

Another witness at the scene reportedly told press:

“That’s probably one of the scariest moments of my life. Me and my daughter were in a queue to watch Frozen, loads of little kids there, all dressed up and everything, then these girls jumped on another girl and loads of these kids just started fighting.”

University of Salford journalism student Rachel Allison filmed the fracas and posted it to Twitter. She wrote: “Just came to see the new Blue Story film, standing in line for snacks when a fight breaks out behind my brother – worst thing is, it’s young girls fighting.

A driver in central Birmingham told I Am Birmingham:

“I’m sitting in my car near a petrol station and haven’t moved in 20 minutes. Traffic is at a standstill and there’s police cars going through. Whatever’s happened at Star City is causing problems all the way here. It’s a nightmare!”

“A number of arrests have been made following disorder at Star City in Birmingham tonight.

“We were called just before 5.35pm to reports that a group of people with machetes had arrived at the cinema within the complex.

“Officers arrived to find a group of more than 100 people, and pockets of fighting broke out as police moved to clear the area. A number of police officers have been assaulted, and several arrests have been made.

“A dispersal order has been out in place giving officers the power to move on groups of people and arrest those who fail to leave. Officers remain at the scene and are liaising closely with management at the venue. Motorists are urged to avoid the area because of traffic build-up.”

The Star City leisure complex in #Birmingham is under police lockdown following reports of a mass brawl involving " over 70 people".

This is a breaking news story and will be updated as we know more.