Jamelia: I’ve never voted before but I want Jeremy Corbyn to be Prime Minister 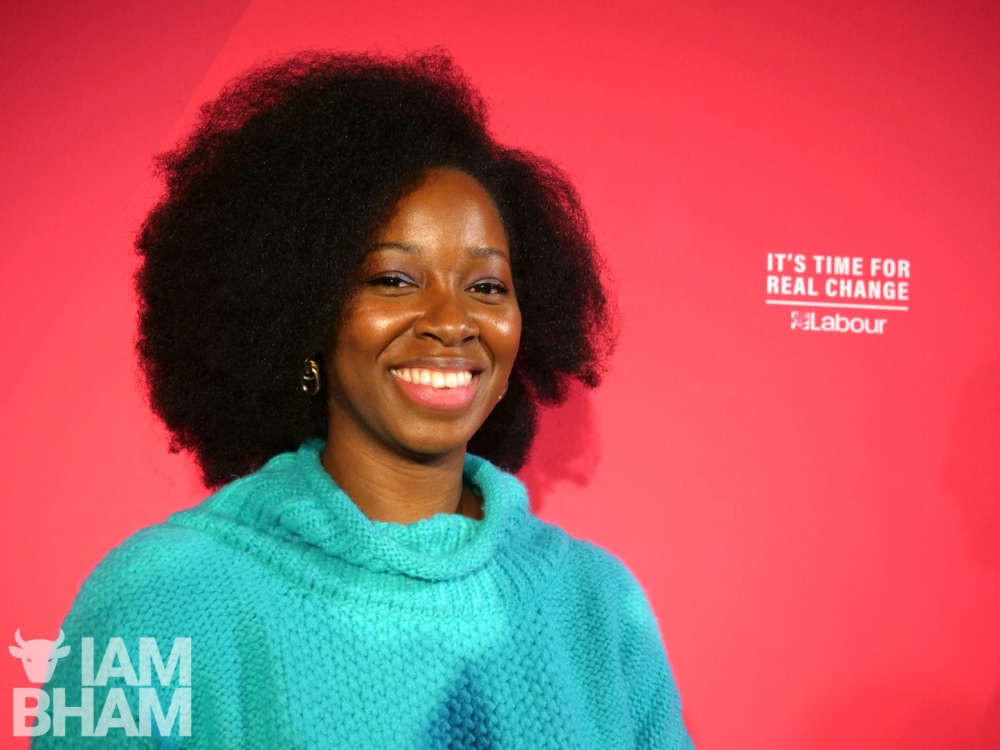 Brummie pop star Jamelia will be voting for the first time in her life this month and has been inspired to participate in the General Election by Jeremy Corbyn, she says.

The 38-year-old Handsworth musician, TV presenter and activist plans on going to the polls next Thursday (12 December) with her 18-year-old daughter Teja.

The ‘Superstar’ singer revealed her lack of voting record at a Labour rally in Birmingham last night, and said she is backing Jeremy Corbyn’s bid for Downing Street.

Introducing the Labour leader, she said: “I stand here with the backing of a fantastic education, fantastic resources and I want that for every child – not just mine.”

“Because these services were there for me when I needed it, and I think they should be there for everyone.

“My daughter turns two on next week. On the 12th all she wants for her birthday is a Labour government.”

Jamelia spoke at the Custard Factory in Digbeth, where the themes of the evening were heavily dominated by uniting to defend the arts and education.

The MOBO Awards winner was joined on stage by Shadow Cabinet as Shadow Secretary of State for Education, Angela Rayner, who was hosting the rally.

Speaking to I Am Birmingham, Jamelia said:

“I am a first-time voter and I just believe that it’s so important to galvanise as many people as possible to vote Labour.

“For the last nine years, we have been suffering as a society, and I think what’s really important is to have a community mindset when it comes electing our next Prime Minister. I am just hugely passionate about it.

“I grew up in a Labour constituency, I was able to take advantage of all of the opportunities there for me, and they’re not here anymore and that is completely unfair, it feels as if it’s unlawful, and none of us should be happy to watch and allow our community members to suffer. We should not be able to do that.

“For me, particularly people who are complaining about being taxed, you’re only getting taxed if you can afford it so why on earth would you not be up for helping other people? As I said, growing up working class, I know exactly what those resources and finances, how they can absolutely change your life and the trajectory of everyone in your family.

Commenting on why she’s specifically backing Corbyn, she said:

WATCH: Jamelia on why she’s backing Corbyn and Labour:

The UK General Election will be held on Thursday 12th December, 2019.

(Visited 1,217 times, 1 visits today)
https://www.iambirmingham.co.uk/2019/12/06/jamelia-ive-never-voted-want-jeremy-corbyn-prime-minister/https://www.iambirmingham.co.uk/wp-content/uploads/2019/12/Jamelia-at-Labour-rally-in-Birmingham-05.12.19-a-800x600.jpghttps://www.iambirmingham.co.uk/wp-content/uploads/2019/12/Jamelia-at-Labour-rally-in-Birmingham-05.12.19-a-300x225.jpg2019-12-06T17:55:49+00:00Staff ReporterBrumFeedGE2019NewsPoliticsShowbizWomxn2019,B'ham,Birmingham,Brum,Corbyn,Custard Factory,Digbeth,Election,Elections,GE,GE 2019,General Election,General Election 2019,I Am Birmingham,Interview,Jamelia,Jamelia Davis,Jamelia NIela Davis,Jeremy Corbyn,Jezza,Labour,Labour Party rally,labour rally,Music Artist,Singer,The Labour Party,UK Labour,Vote,VotingBrummie pop star Jamelia will be voting for the first time in her life this month and has been inspired to participate in the General Election by Jeremy Corbyn, she says. The 38-year-old Handsworth musician, TV presenter and activist plans on going to the polls next Thursday (12 December) with her 18-year-old...Staff ReporterStaff Reporter[email protected]AdministratorI Am Birmingham
« Rising star Jack Savoretti to headline a Summer’s evening of music in Telford
Banksy artwork highlighting homelessness appears in Birmingham overnight »