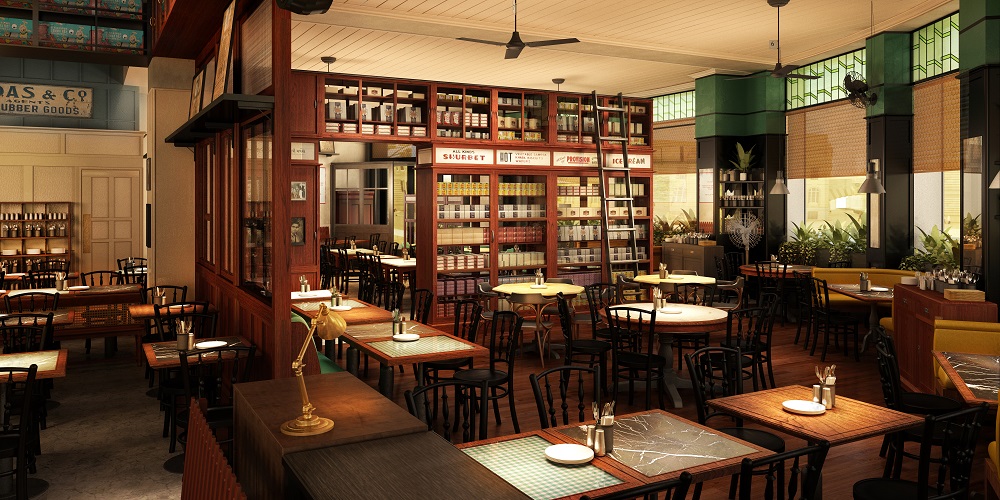 The Dishoom dining experience is coming to Birmingham as the doors to the new restaurant open in Chamberlain Square on April 1st 2020.

Dishoom is known for paying loving homage to the Irani cafés that once lined the streets of Bombay. These cafés broke down barriers by bringing people together over food and drink.

They were the first places in Bombay where people of any culture, class or religion could take cool refuge from the street with a cup of chai, a simple snack or a hearty meal. People from all walks of life shared tables, rubbed shoulders and broke bread together.

Dishoom intends to continue their history of breaking down barriers and bringing people together over Bombay-inspired food and drink with the opening of a new restaurant in Chamberlain Square, Birmingham.

The opening of the new Dishoom in Birmingham will usher in 100 jobs for the city.

The official launch of Dishoom in Birmingham is April 1st 2020 at One Chamberlain Square, where it will enjoy the company of the city’s most beautiful and historic buildings.

Dishoom Birmingham will occupy part of the ground floor of One Chamberlain Square, overlooking Grade I listed Birmingham Town Hall, the Birmingham Museum and Art Gallery, and the Chamberlain Monument fountain, some of the city’s most charming and impressive historic landmarks.

The design of the Birmingham Dishoom will weave together threads of Bombay’s history with a Birmingham-inspired narrative. The space will accommodate 330 guests, across the dining room, Permit Room bar and outdoor terrace.

Dishoom will prepare for the grand opening in April by hosting a soft launch. People are invited to attend the soft from Saturday 21st to Tuesday 31st March 2020. During this final stage of preparation of the restaurant, guests will be offered 50% off food and Dishoom will operate a walk-ins only policy.

The soft launch will also welcome some exclusive Birmingham Specials created by Executive Chef Naved which includes the Mutton Chaap Korma for guests to enjoy.

The Mutton Chaap Korma is a classical Indian korma which sees marinated chops of mutton lavished with a rich, nourishing sauce, best mopped up with the accompanying khamiri roti.

The Dishoom dining experience not only offers delicious and drinks to patrons but it also has a successful strategy in place that offers free meals to children living on the breadline.

Dishoom runs a scheme that helps impoverished children. For every meal served at Dishoom Birmingham, the team will donate a meal to a child who might otherwise go hungry. A meal for a meal.

Dishoom work with two established charities – The Akshaya Patra Foundation in India and Magic Breakfast in the UK – who provide nourishing meals to children in schools.

This initiative began during Ramadan in 2015 and was made permanent at Diwali the same year. Since then, Dishoom has donated over 8 million meals.

The Dishoom dining experience will serve exotic and delicious delights at the very heart of Birmingham city centre. Ahead of the official launch on April 1st guests can look forward to the soft launch which takes place in March.

The Dishoom Birmingham soft launch will run from Saturday 21st to Tuesday 31 st March. Normal hours will be observed, but please note the restaurant will close early on 31st March at 3pm.

Bookings open at 9am on 1st March 2020 for 1st April onwards. Bookings for breakfast and lunch are available for groups of all sizes, and for dinner (after 5.45pm) for groups of 6 or more. Bookings can be made at www.dishoom.com/birmingham.