Ramadan marathon man raises over £53,000 for charity to help those affected by coronavirus 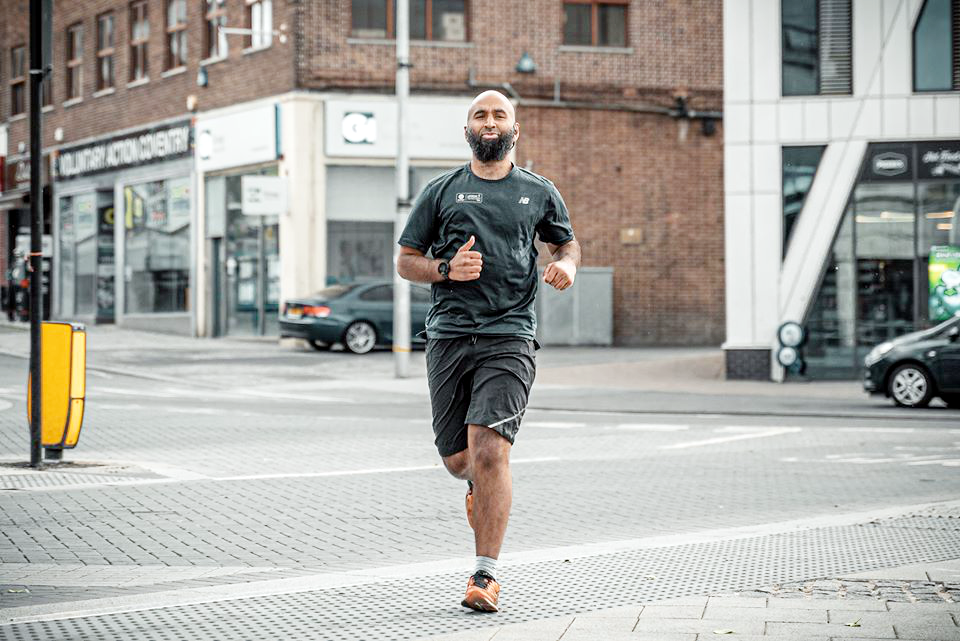 Haroon Mota ran every day during Ramadan without food or water to raise money for charity (Photo: Haroon Mota)

An incredible feat took place over the holy month of Ramadan as a Coventry man ran 260km and raised over £53,000 for charity while fasting.

Haroon Mota, 34-years-old, initially set himself a target to raise £25,000 for some of the most vulnerable and poorest people in the world affected by coronavirus but by the end of his challenge he had doubled his target and raised more than £53,000 as Ramadan came to a close and the Muslim community celebrated Eid.

When Ramadan started in April it inspired Haroon to do something for fellow human beings who are less well off, and he came up with the idea to raise money through British Muslim charity Penny Appeal whose motto is “we use small change to make a big difference’.

The charity has put into effect an emergency response programme to help poverty stricken countries deal with the horrendous impact of the coronavirus pandemic.

Penny Appeal is also currently distributing food parcels and hygiene packs to elderly and vulnerable people who are self-isolating in the UK.

The charity recently stepped in and helped when £3,000 worth of supplies were stolen from a food bank in the Foleshill area of Coventry.

Prior to Boris Johnson’s coronavirus lockdown, Haroon had planned to run four major world marathons in London, New York, Berlin and Chicago as part of the 2.6 challenge. These marathons were set up to raise money for charities which have lost funding due to the cancellation of major funding events.

Haroon was inspired to adapt the 2.6 challenge and change it to the the 260km challenge. He decided to run 10km every day while fasting during the month of Ramadan and raise money for Penny Appeal.

At the start of his gruelling challenge he said: “I’m challenging myself to run 260km (161.5 miles) this Ramadan whilst fasting. We can’t drink or eat from dawn (3am), until sunset (9pm) – that means no food or drink for 18 hours and completing a 10km run every day whilst fasting.

“I feel very thirsty when I run, but I keep in mind the millions of people who do not have access to clean water and it motivates me to keep pushing myself.

“This is going to be extremely tough but I’ll push myself and I’m very determined to reach my goals for the sake of charity, insha Allah.”

He added: “I hope to raise money to help people facing crisis, war and displacement in places like Syria, Gaza and Yemen.

“The threat of coronavirus tearing through refugee camps and poverty-stricken areas is potentially catastrophic to these already vulnerable people.”

Haroon is deeply concerned about the huge displacement of people who have been forced out of their homes through war or natural disaster and wants to show solidarity and offer some aid.

He said: “There are over 70 million forcibly displaced people around the world.  In the entire history of humanity, there have never been this many people who have been forced to flee from terrifying wars and devastating natural disasters.

“This is the new norm, but there’s nothing ‘normal’ about it. These are everyday people; mothers, sons, neighbours. Entire communities.

“That’s why I’m running; in solidarity with the millions of innocent people who are forced to flee their homes and rebuild their lives, every single day. I choose to run, but they have no choice. ”

All of the money raised by Haroon’s efforts will go directly towards giving aid to those at risk of contracting coronavirus.

Haroon is inspired by his Islamic faith to reach out and help others regardless of their religious or racial background. A line from the Qur’an forms a part of Haroon’s fundraiser: “Whoever saves a life, it is as if he has saved the whole of mankind” – (Qur’an 5:32).

On Saturday 23 May, as Ramadan came to an end, Haroon completed his epic challenge.

He was ecstatic and sent out thanks to his supporters:

“Thank you so much for your support!

“We did it! On Saturday 23 May, the 30th day of Ramadan, I completed the 260km challenge. Praise the Lord for keeping me healthy and safe.

“I only ran the miles, but it was you guys who made all the contributions.

“Alhamdulillah! Thank you to my friends and family who came out to support me.”

He also offered some advice to people who have suffered mental and physical challenges while under lockdown: “It’s important to stay active, focussed, positive and still set yourself short and long term goals.”

Donations to Haroon Mota’s Penny Appeal page can be made here.

(Visited 972 times, 1 visits today)
https://www.iambirmingham.co.uk/2020/05/26/ramadan-marathon-man-raises-53000-charity-help-affected-coronavirus/https://www.iambirmingham.co.uk/wp-content/uploads/2020/05/Facebook_pe-800x534.pnghttps://www.iambirmingham.co.uk/wp-content/uploads/2020/05/Facebook_pe-300x200.png2020-05-26T14:13:07+00:00Rangzeb HussainCharityCommunityCoronavirusFaithNewsSports2.6 Challenge,20/20,appeal,B'ham,Berlin,Birmingham,Boris Johnson,Chicago,coronavirus,Coventry,COVID-19,Eid,England,Fasting,Foleshill,fundraiser,Gaza,Haroon Mota,I Am Bham,I Am Birmingham,lockdown,London,Marathon,Midlands,New York,Palestine,Penny Appeal,Poverty,Ramadan,Rangzeb Hussain,Refugees,Run,Syria,West Midlands,West Midlands Police,YemenAn incredible feat took place over the holy month of Ramadan as a Coventry man ran 260km and raised over £53,000 for charity while fasting. Haroon Mota, 34-years-old, initially set himself a target to raise £25,000 for some of the most vulnerable and poorest people in the world affected by...Rangzeb HussainRangzeb Hussain[email protected]AuthorI Am Birmingham
« Heart of England offers help to mental health charities in the Midlands during lockdown
Black Country sculptor creates tribute to NHS and care workers fighting coronavirus »