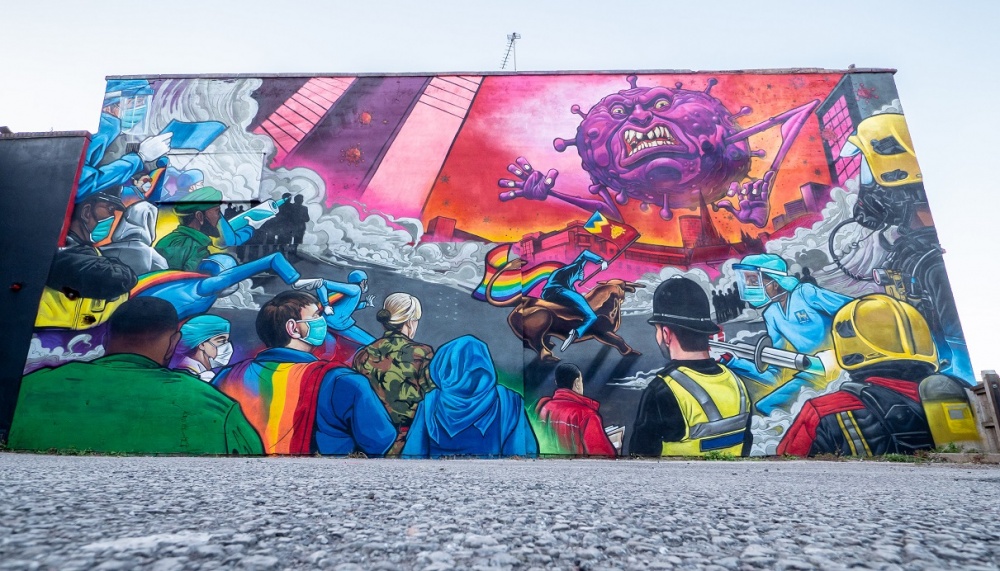 A stunning new mural which celebrates Birmingham's fight against COVID-19 has been painted for charity (Photo: Edwin Ladd)

A dramatic new mural depicting Birmingham keyworkers battling against COVID-19 against the backdrop of the city’s skyline has been painted for charity in Digbeth.

Birmingham-based street artist Josh Billingham (aka Gent48) painted the gigantic mural over the past few days and the final touches will be applied on Friday as the mural is unveiled to local dignitaries. The vivid new art also celebrates members of Birmingham’s Black, Asian and minority ethnic (BAME) community who have played a key role in the war against COVID-19.

The spirit of Birmingham has been put through a formidable test in recent months by the coronavirus pandemic, and the strength and resilience of the community spirit is in need of a boost.

A charitable collective, Art for Charity, was determined to boost and celebrate the collective spirit of Birmingham with an inspirational piece of artwork entitled ‘Forward in Unity’.

Birmingham-based creative entrepreneurs Professor Paul Cadman and Nathaniel Hanna came together with the specific aim of highlighting the indomitable spirit of the city and to recognise Birmingham creatives.

The goal of the charity is to harness the creativity and skills of artists and creatives across Birmingham and to raise much-needed funds for charity.

In return, the artists receive royalties for everything they produce, with the most significant portion reserved for charitable endeavours. Crucially, the supported cause is and will always remain the Lord Mayor’s Charity, ensuring that funds raised in the city fund fantastic efforts in the city.

The devastating impact of COVID-19 and its effects will live long in the memory. Not since World War II has Birmingham’s collective spirit shone brighter.

The city is home to a street artist of international renown in the shape of Josh Billingham (aka Gent 48). His work has brightened up several areas of the city including the Custard Factory and Southside.

Josh’s new art is an action packed mural in the centre of Digbeth. The massive wall at the rear of Norton’s Bar at the junction of Meriden Street and Coventry Street forms the epic canvas of the new art.

The piece is celebratory and unique in style, it seeks to pay homage to the frontline professionals of the city who have worked tirelessly to keep people safe and to ensure that life goes on as usual, or as close as possible.

Despite the ravages and destruction caused by the pandemic on the spirit and morale of the city there were some positive aspects too which the new mural celebrates. Communities found new friendship and unity as people and charities consolidated their efforts for the greater good.

Birmingham’s culturally diverse communities united and made a courageous stand against the raging pandemic. Frontline keyworkers from the NHS, care workers, police, fire service, paramedics and ambulance crews, including air ambulance, etc, all make an appearance in Josh’s vivid mural.

Josh highlights the contribution made by Birmingham’s BAME community with members of the Sikh, Muslim (a nurse wearing a hijab is included in the art), and Afro-Caribbean communities are shown standing shoulder-to-shoulder and bravely facing up to the invading COVID-19 beast.

Birmingham is renowned for its diverse set of communities which have all played a part in forming the unique character of the city, and its that strong character that currently stands against coronavirus as it tears through the city.

Josh also celebrates the city’s iconic skyline featuring the Rotunda and St. Martins-in-the-Bullring, and the famous Birmingham bull is shown charging towards the COVID-19 monster as a man wearing a cape displaying the colours of ‘Thank You NHS Heroes’ rides on the back of the bull. The flag of Birmingham is held up proudly by the bull rider as he fearlessly charges towards the rabid-looking COVID-19 invader.

The art is painted on an epic scale which allows Josh to conjure up a truly dramatic atmosphere. His style veers from the retro videogames of the 1980’s for the COVID-19 monster to almost photo-realism with the defiant crowd of Brummies.

Josh takes street art to photojournalism level by placing the viewer directly ‘inside’ the art. The perspective of the mural is so effective that when viewed from ground level the viewer immediately feels as if they are standing with the crowd in the painting.

Standing united against a common foe.

Art for Charity took it upon themselves to do all in their power to ensure that Birmingham emerges from lockdown, into the ‘new normal’, better positioned than when it entered.

The mural is the centrepiece of a new charitable effort. It will stand proudly as part of the Digbeth skyline.

The organisers plan to sell prints and souvenirs, all in the name of enabling Birmingham to move Forward, just as it always has.

Larger prints will bear the signatures of the artist, the Lord Mayor Cllr. Muhammed Azim and dignitaries from across the city.

Art for Charity seeks to commemorate the event not only through art, but also through some of the individuals that made such a robust response possible.

Smaller prints will incorporate printed signatures and give those all over the city the opportunity to mark the occasion while shaping the bright future Birmingham has to look forward to.

‘Forward in Unity’ is the first piece, but intended to be the first of many. This city has a vast amount to offer creatively, and the charitable endeavour seeks to harness those qualities in such a way that charities and local initiatives may prosper.

The highly anticipated street art mural celebrating Birmingham’s spirit in response to the COVID-19 pandemic opens to the public on Friday 29 May 2020.

Donations to Paul Cadman’s fundraising for the Lord Mayor of Birmingham’s Charity can be made here.

The mural will be open to the public after the launch and can be viewed at the following location: