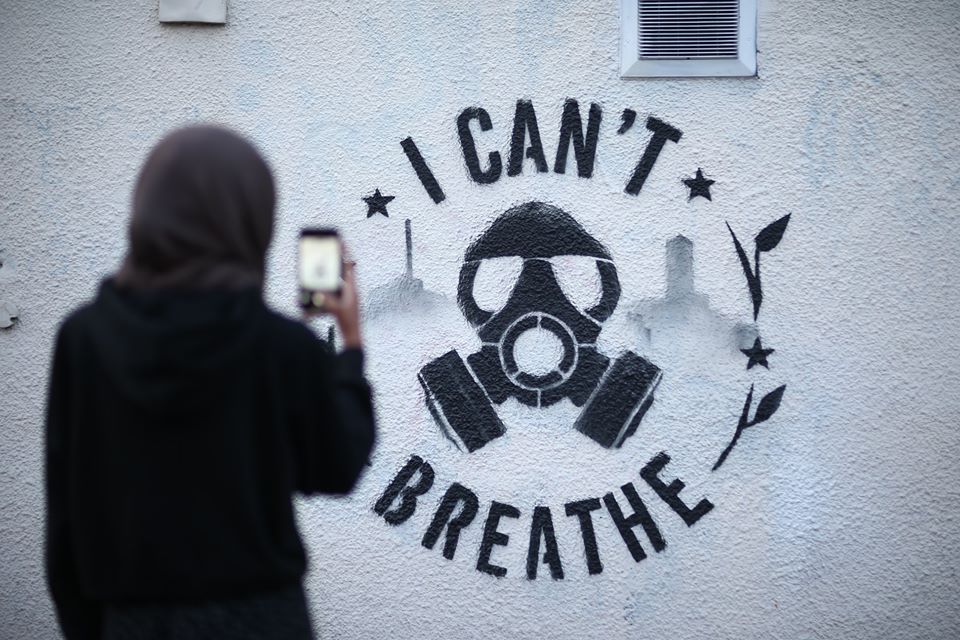 A street art tribute to US police brutality victim George Floyd has been taken down hours after it was painted in Kings Heath.

Birmingham-based artist Mohammed Ali said he was “saddened and disturbed” by the sudden removal of his latest stencil art entitled ‘I Can’t Breathe’ which was painted in Silver Street on Monday night.

The street art was produced as a response to the tragic death of George Floyd in Minnesota. According to the artist, the art was positive in nature, respectful, and poetic, and it offered a prayer for understanding.

Ali expressed shock at the speed of the removal and initially thought it was removed by Acorns Hospice charity shop, on whose property the art was featured, describing the censorship as being “silenced”.

However, after contacting management about the art being taken down, Ali was told that Acorns did not approve the removal and were equally disappointed by the action.

A spokesperson for Acorns Hospice stated: “At Acorns we are highly committed to equality and inclusion.

“We can appreciate your artistic expression of support for the very important movement that is happening right now.

“We are sorry to hear that it has been painted over.”

Street art is sometimes tagged by other artists or painted over and replaced with another work. Such is the nature of the street art scene.

However, Ali’s tribute to George Floyd was neither tagged nor replaced with another work of art.

It was totally whitewashed, mysteriously removed and painted over without any notice.

Artist Ali said he was deeply saddened to find his community tribute to George Floyd gone earlier today. He cited its themes of a shared humanity and giving a platform to people whose voices are too often silenced as reasons for why he created the artwork.

He said: “I am saddened to share news that less than 24 hours of its creation, the artwork highlighting the situation in the USA has been painted off.

Although there has been no confirmation, Ali hinted at the disturbing possibility of Birmingham City Council being responsible for the removal of his art, despite non-essential council workers currently being largely inactive.

Ali said: “Acorns Children’s Hospice have stated clearly that they support the artwork being on their wall, they welcomed and embraced it.

“For the record the wall is often left for many weeks with graffiti tags without being painted over by any authority.

“Just before I painted this I had to use white paint to take off some random scribbles that were left there for weeks and weeks.

“Most likely it was the council that had it removed. They have the power to remove what they want even if it’s a privately owned building.”

He added: “This is baffling as there is so much that has no creative element to it that is just left there. I’ve never known them to act so quickly.

As soon as the tribute art was painted last night in Silver Street, off the High Street in Kings Heath, it began to attract admirers.

Ali said: “I saw people in big numbers arrive to take pictures with the art. It uplifted them, it highlighted a problem perhaps they have not really given much thought to.”

However, despite his art being removed, and for whatever reason it was painted over, Ali vowed to continue using his talent to give voice to the voiceless, highlighting unity and peace, and bringing hope to people through his art.

“We will keep fighting. We will not be defeated and must use this opportunity to come back stronger to support and fight for the change we want to see with our global family.”

The killing or George Floyd, 46, has re-ignited global anger towards the US police force in response to what many anti-racism activists have described as the “barbaric murder” of an innocent black man.

Footage of Floyd’s arrest on 25 May shows a white police officer, Derek Chauvin, kneeling on Mr Floyd’s neck while he was pinned to the floor. Mr Chauvin, 44, has since been charged with murder.

Members of the international Black Lives Matter movement have condemned the death and called for justice as protesters continue to take to the streets.