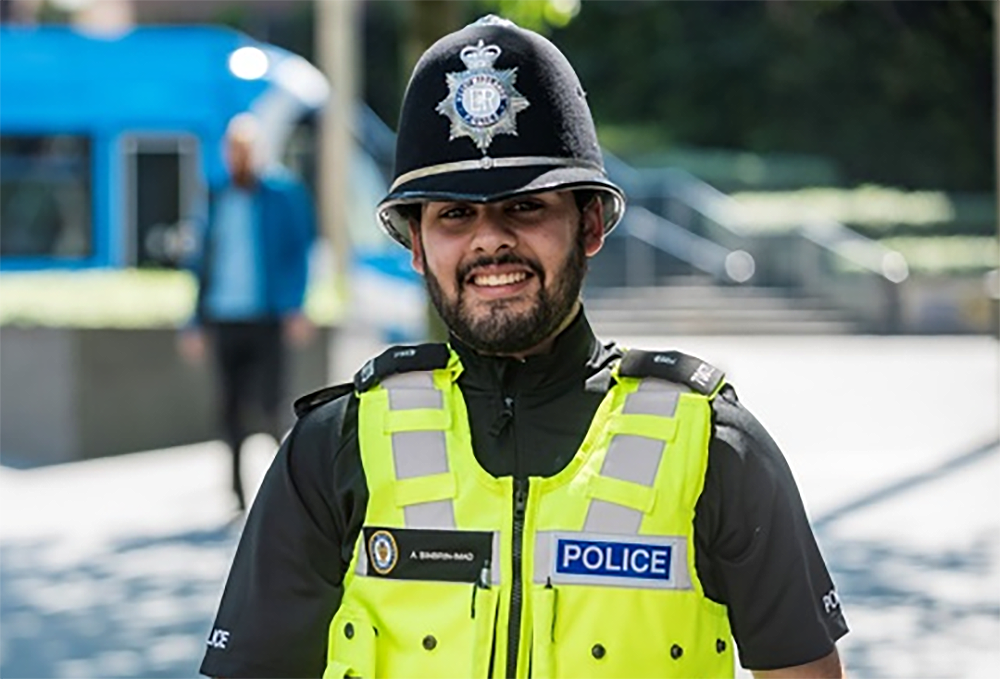 A teenager who was inspired by local police efforts to keep communities safe has now become a Special Constable with the hope of doing the same.

Abdullah Imad was so impressed by officers’ dedication to helping others he made his own ’thank you’ cards to give them as a 15-year-old.

Now aged 19, he is hoping to play his own role in supporting the force and protecting the public after training up as a Special volunteer with West Midlands Police.

Abdullah – who is doing a degree apprenticeship in engineering – said: “I’ve always admired and respected the role of police officers.

“They regularly put themselves in difficult and dangerous situations to help and protect others.

“I remember being 15 and wanting to show my gratitude by making the thank you cards and handing them to officers in Birmingham city centre.

“They were always so appreciative and they’ve helped inspire me to want to make a difference. The great thing is I can be a Special while continuing my apprenticeship and degree.”

Four years ago, Abdullah distributed more than 100 ‘thank you’ cards and gave them out to police officers, sending some to other parts of the UK, and even to America.

His cards read: “Thank You for risking everything to keep me and others safe!

“And even though some seem to be against you, that’s until they need you!

“Please remember that I support you!”

One of the people to welcome him into the force is PC Dave Inglis, who was one of the recipients of Abdullah’s thank you message.

“I always remember Abdullah telling me he’d always appreciated police officers and had aspirations to become a Special Constable,” he said.

“It’s great to see he has joined the force and I’m sure his caring nature will shine through in the role.

“Some days can be challenging but kindness, such as that shown by Abdullah, never fails to make you smile.”

What are Special Constables?

“Specials” have the same powers as regular officers and wear the same uniform. They volunteer at least 16 hours a month but times are flexible.

Specials’ work alongside regular officers and Police Community Support Officers in many policing teams and are expected to commit an average of 16 hours service per month.

Despite being volunteers, Special Constables have the same powers of a police officer and are involved in carrying out duties like responding to 999 calls, patrolling local communities, road safety initiatives, helping ensure public safety and security at local and major events, as well as working in some of our specialist departments, such as Roads Policing, Public Protection, Operations and Force CID as investigators or specially trained volunteer officers.

According to West Midlands Police, “Special Constables are integral members of our volunteering family. Specials wear the police uniform and have fully warranted powers.”

Although Abdullah joins the Special Constables in the force, overall recruitment targeted at people from Black, Asian and Minority Ethnic (BAME) background is a priority for West Midlands Police due to underrepresentation from these communities and demographics.

According to Police and Crime Commissioner David Jamieson, the force aims to recruit 1,000 BAME officers over the next three years in a bid to “change the face” of West Midlands Police.

Issues and concerns between police in the UK and ethnic minorities have most recently been highlighted by way of Black Lives Matter protests, with hundreds of people congregating outside West Midlands Police headquarters in Birmingham only last month, where they called for WMP to investigate complaints relating to excessive force against black men.

With years of austerity and Government funding cuts hampering the ability to engage fresh recruits, funding for 20,000 police officers has now been approved by the Home Office, allowing police authorities “a much better opportunity to make real change”, according to Jamieson.

West Midlands Police is England’s second biggest force with 6,495 officers. The 1,000 new BAME officers will be among 2,750 recruits which, after replacing those leaving the force, will mean 1,200 new police officers.