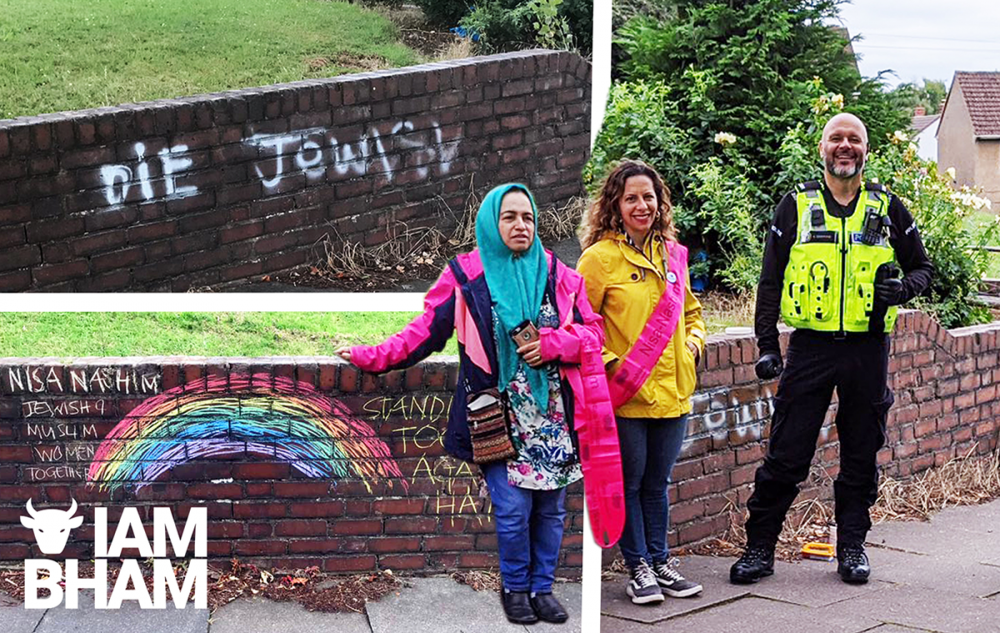 A group of Jewish and Muslim women, including the city’s only female rabbi, have defiantly come together to remove antisemitic graffiti which appeared overnight on a wall in Billesley in Birmingham, transforming it into positive art depicting a rainbow.

Determined to show they’re “stronger together”, the women joined forces after vile and abusive words of hate targeting the Jewish community were discovered daubed on a brick wall in the city ward, located in the Selly Oak constituency.

Upon discovering the words “Die Jewish” had been spray painted onto the wall, local resident Benita Wishart contacted several other women from across the city and organised the removal of the offensive vandalism, opting to replace it with messages of peace alongside a brightly coloured rainbow.

Where the message of hate had been left, it now reads: “Standing Together Against Hate – Jewish and Muslim women together.”

Before letting their creativity flow, the women got in touch with West Midlands Police who helped them remove the graffiti and praised their collaborative effort to make good of a bad situation.

Wishart, who called on close friends from different faiths to help, said they decided to counter hate with messages of hope.

“This is our message to those who seek to divide us. This is what being an ally looks like.

“We stand together in Birmingham. Hate crime has no place in our city. Our citizens value diversity and stand side by side.

“There must be zero tolerance of such hate against any group.”

Wishart thanked local police and residents for their assistance, and the local community groups who came together to clean-up the racist graffiti.

Birmingham’s only female rabbi, Margaret Jacobi, was also on the scene to help do her bit. Heading the congregation at the city’s Progressive Synagogue since 1994, Jacobi is an active member of several initiatives promoting community cohesion and peace.

Among them Citizens UK, an independent membership alliance of civil society institutions acting together for the common good of the city, and Nisa-Nisham, a national Jewish and Muslim Women’s Network set up to “build personal friendships” between faiths.

Many of the women who helped remove the sickening graffiti are members of these organisations, which helped them facilitate the speedy and effective response.

A spokesperson for the Birmingham branch of Citizens UK tweeted, “We are outraged and saddened by this act of hate” but praised the community response as “a powerful show of solidarity”.

Alongside the rainbow and positive messages, the women – from all faiths and none – also posed for photos, holding up posters stating ‘Active Allies’, ‘Standing Together’ and ‘We’re All Neighbours’.

Messages from The Great Get Together, which took place last month in memory of hate crime victim Jo Cox, were also attached to a tree nearby. These read: ‘We are all part of the human race’ and ‘I believe in the power of community’.

“Shocked to see vile antiSemitic graffiti in residential area of constituency,” he tweeted.

“Good response from Nisa-Nashim, Birmingham Council, West Midlands Police who sent officer to remove it immediately. Could be one off but must remain vigilant to threat of far right extremists.”

Shocked to see vile antiSemitic graffiti in residential area of constituency. Good response from Nisa-Nashim, Birmg Council,West Mids Police who sent officer to remove it immediately. Could be one off but must remain vigilant to threat of far right extremists

Cllr John Cotton, Cabinet Member for Social Inclusion, Community Safety & Equalities, commented: “Utterly shameful and disgusting.  There can be no place for hate in our city.

“We must remain vigilant and robust in rooting out those who seek to peddle hatred, division and racism.”

The Billesley policing team, who sent officer PC Adrian Griffiths to respond to the incident, added: “Thank you to our community who came and actively stood together against hate crime.

“Hate graffiti now removed and replaced with positive messaging for our community in Billesley.”

The number of antisemitic hate incidents recorded in the UK has reached a record high, according to Community Security Trust, a charity that monitors antisemitism in the country.

The trust recorded 767 hate crimes in the first six months of 2017 – a 30% rise in comparison to the same period last year. This is the highest level ever recorded since monitoring began 33 years ago.

If you wish to report or speak to West Midlands Police about hate crime, you can do so here.