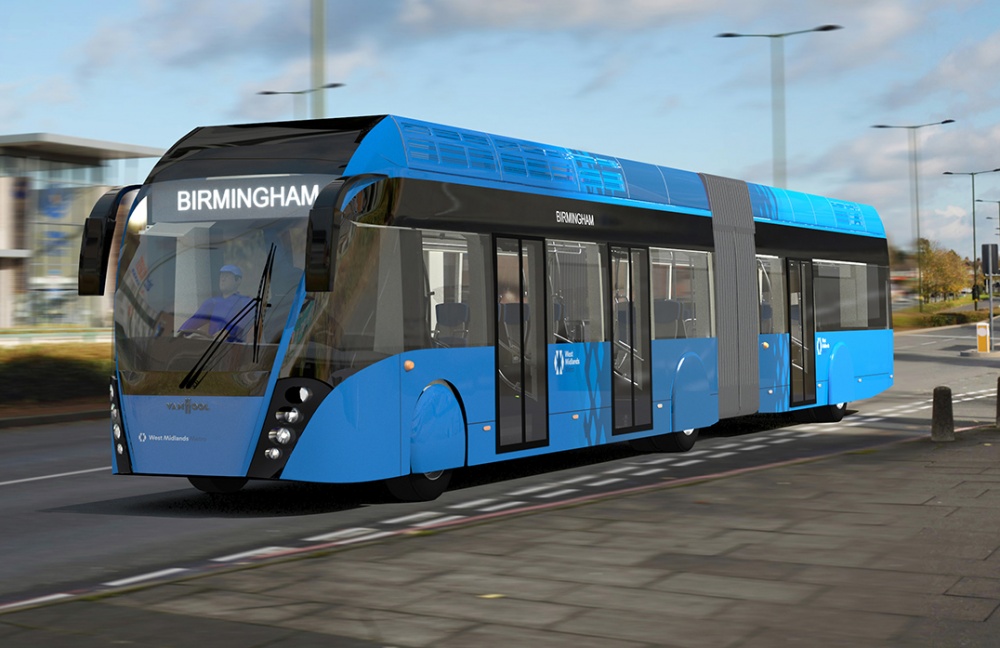 The first Sprint cross-city rapid bus line from Walsall to Solihull via Birmingham city centre is due to open in 2022 (Image: TfWM / WMCA)

Buses of the future – with better access to WiFi, contactless payment and USB charging ports – could be whizzing along West Midlands roads very soon, as progress continues to improve public transport in the region.

In a bid to improve public modes of transport and make travel more efficient, Transport for West Midlands (TfWM) are looking to hear views on proposals to transform bus services across the West Midlands.

It is hoped a proposed agreement by the network with bus companies will set new standards for bus services along the key A34, A45 and Lode Lane corridors in Walsall, Birmingham and Solihull – including hearing loops, wheelchair spaces, USB charging ports and Wi-Fi on all services.

Further proposals could improve services across the whole West Midlands area – including offering discounted travel for under 25s.

In order to gauge wider opinion on the improvements, public consultation on the proposals will run for 10 weeks, closing on the 13th September 2020.

Last year the West Midlands Combined Authority (WMCA), of which TfWM is a part, approved the setting up of the Enhanced Partnership (EP) which sets out a vision to improve bus services in the region and how this can be delivered.

This includes proposals for bus facilities and measures required to create a more enjoyable, reliable and safer travel experience as well as quicker journeys along the A34 (north), A45 and Lode Lane Corridors.

This route from Walsall to Solihull via Birmingham city centre includes the first Sprint cross-city rapid bus line which is due to open in 2022.

Responses will be used to inform the final proposal which will then go to WMCA’s Transport Delivery Committee for approval later in the year.

Committee chair Cllr Kath Hartley said: “If we are to persuade more people to get the bus, which is vital if we are to ease traffic congestion and improve the environment, then we have to provide a modern and efficient service and experience for passengers.

“This Enhanced Partnership sets out how TfWM will work with bus companies to ensure that these services provide an excellent level of comfort and accessibility.”

The proposed EP has been developed with partners – including the seven constituent local authorities and bus operators – as well as other key stakeholders, including passenger groups, industry and business.

Proposals to make bus services more accessible for passengers include offering discounted travel for those under 25 and the introduction of hearing loops at every wheelchair space and priority seating.

Latest technologies will be upgraded onto services such as USB charging ports, Wi-Fi and contactless payment options will be provided by every operator. TfWM states “The aim is to create a socially inclusive modern bus network”.

Two Sprint schemes have been prioritised to connect Walsall with Birmingham Airport and Solihull, along the A45 and A34, in time to support the Commonwealth Games in 2022.

The uninterrupted route is the first of its kind and is expected to benefit over 30 million bus trips a year, as well as providing over £200 million in economic benefits.

Sections of the Walsall to Birmingham Airport and Solihull A34/A45 route are being prioritised to support the Birmingham 2022 Commonwealth Games. This uninterrupted route from Walsall town centre to Birmingham airport is the first of its kind and is expected to carry over 30 million bus trips a year, as well as providing over £200 million in economic benefits.

Sprint has been a key feature of the regional transport strategy for several years. It was first proposed in 2011 as part of the West Midlands Local Transport Plan, which aims to enhance connectivity throughout the region, improve access to other initiatives such as High Speed 2 and provide sustainable public transport.

It’s particularly important in Birmingham due to:

What does Transport for West Midlands do?

Transport for West Midlands, part of the West Midlands Combined Authority, is responsible for making transport ‘happen’. They are accountable for delivering against a statutory transport plan Movement for Growth, which they say “sets out our ambition to create a happier, healthier and better connected region through improving transport”.

“We’re striving to deliver a world-class integrated transport system which is clean, safe and affordable. One which puts people at the heart of decisions and gives everyone in the West Midlands access to the very best education, training and employment opportunities, no matter where they live in the region.”

£5bn is committed up to 2026 to almost 200 schemes, set out in TfWM’s 10 year delivery plan, which will help them achieve their goal to meet the needs of a rapidly growing population, while enabling economic growth. They are also supporting investment in the region’s transport system from partners including Network Rail, Highways England, High Speed 2 and the Department for Transport.

Working in partnership with 7 local authorities, TfWM serve a population of 2.8m and are responsible for 8m daily journeys, concessionary schemes and providing essential bus services. Their smartcard initiative, Swift, is the largest such scheme outside London.

TfWM own, operate and reinvest profits in the Midland Metro, which carries over 7m passengers every year. When the current expansion plans are complete that figure will rise to 30m. By 2026, their tram network will have tripled and serve two HS2 stations as well as offering improved access to Birmingham Airport.

Local rail services are co-managed by TfWM under the West Midlands Railway franchise, with plans to open two new rail stations in the Black Country by 2021.

Members of the public are encouraged to comment on the proposed EP Plan and Scheme at:  EPConsultation.tfwm.org.uk, or contact TfWM to request a copy of the consultation leaflet and questionnaire in an alternative format on 0345 303 6760 or via email: [email protected]