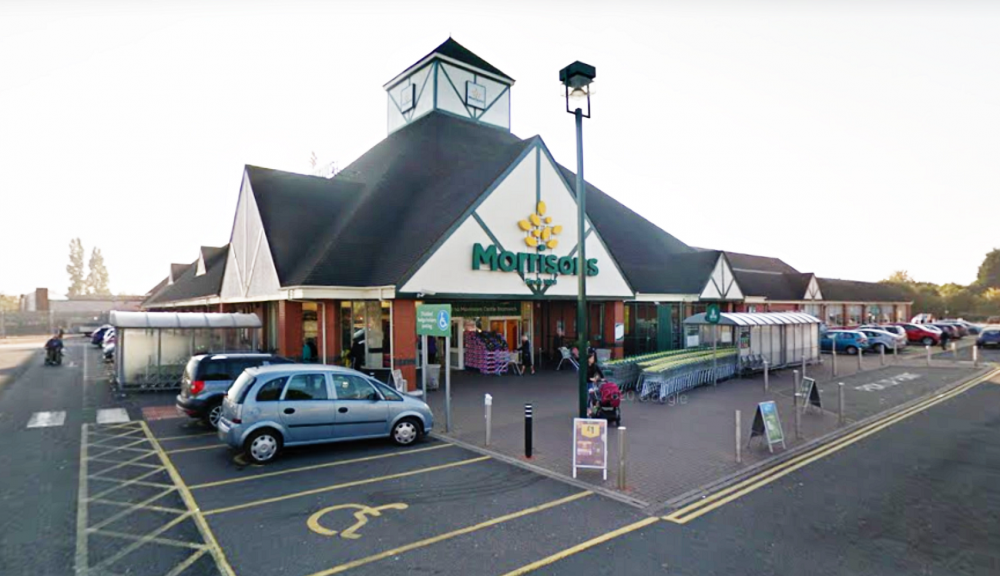 Police are hunting an axe wielding gang of carjackers who robbed a mother and daughter (Photo: Google Maps)

A shocking carjacking took place on Friday evening at Morrisons in Castle Bromwich as a mother and her young daughter were mercilessly robbed by a hooded gang armed with an axe who stole the victim’s BMW.

The 35-year-old woman had just parked her BMW in the car park and had got out of the car when a gang of four masked men, one armed with an axe, demanded her keys.

One of the cowardly thugs snatched the keys from the frightened victim’s hand and pushed her violently to the floor. The terrifying incident took place around 7.10pm on Friday 2 October.

Three of the thugs got into the woman’s car and drove it away, hitting a kerb near the front of the shop and then speeding out of the car park.

The fourth criminal sped off in the car that the gang arrived in, believed to be a silver estate.

West Midlands Police are trying to trace both of the vehicles, and have released an image of the woman’s car.

The victim’s 12-year-old daughter has been left traumatized by the ordeal.

“This was a terrifying, intimidating attack by four men who could clearly see that the victim and her young daughter were alone.

“Not only did the victim’s daughter witness their car being stolen but she also had to see her mother being pushed to the floor with one of the offenders having an axe.”

A police spokesperson issued a ‘thank you’ to the members of the public who came to comfort the victims after the horrifying incident which left both mother and daughter shaken.

Detectives have posted official descriptions of the heartless robbers. The criminals were described by witnesses as having dark skin, wearing black clothing with snood-type face coverings. They had local accents.

Police have confirmed that CCTV is being recovered by officers and a number of witness statements taken. Officers in charge of the investigation are also keen to hear from anyone with dash-cam footage which will help trace the brazen thugs and put them behind bars before another attack is launched.

“I urge the members of the public who witnessed this incident and bravely came to the aid of the victims to contact us, any further information in relation to the car that the offenders arrived in, their identity and any sighting of the victim’s stolen car would be greatly appreciated along with any dash-cam or recordings of the incident.”

(Visited 614 times, 1 visits today)
https://www.iambirmingham.co.uk/2020/10/05/carjackers-armed-axe-target-mother-daughter-castle-bromwich-morrisons/https://www.iambirmingham.co.uk/wp-content/uploads/2020/10/Morrison-Castle-Bromwich-800x461.pnghttps://www.iambirmingham.co.uk/wp-content/uploads/2020/10/Morrison-Castle-Bromwich-300x173.png2020-10-08T17:40:14+00:00Rangzeb HussainCrimeNewsappeal,Axe,B'ham,Birmingham,BMW,Brum,Brummies,Carjacking,castle bromwich,CCTV,CID,City,Crime,Dash-Cam,DC Kerrie Galloway,England,Force CID,gang,Hoods,I Am Bham,I Am Birmingham,Investigation,Masks,Midlands,Morrisons,news,Police,Rangzeb Hussain,robbery,UK,West Midlands,West Midlands Police,WMPA shocking carjacking took place on Friday evening at Morrisons in Castle Bromwich as a mother and her young daughter were mercilessly robbed by a hooded gang armed with an axe who stole the victim's BMW. The 35-year-old woman had just parked her BMW in the car park and had...Rangzeb HussainRangzeb Hussain[email protected]AuthorI Am Birmingham
« Migrants bike together at Edgbaston Reservoir to defy “hostile environment”
“Horrific vandalism” say Brummies as UB40 pub gobbled up by HS2 demolition in Digbeth »