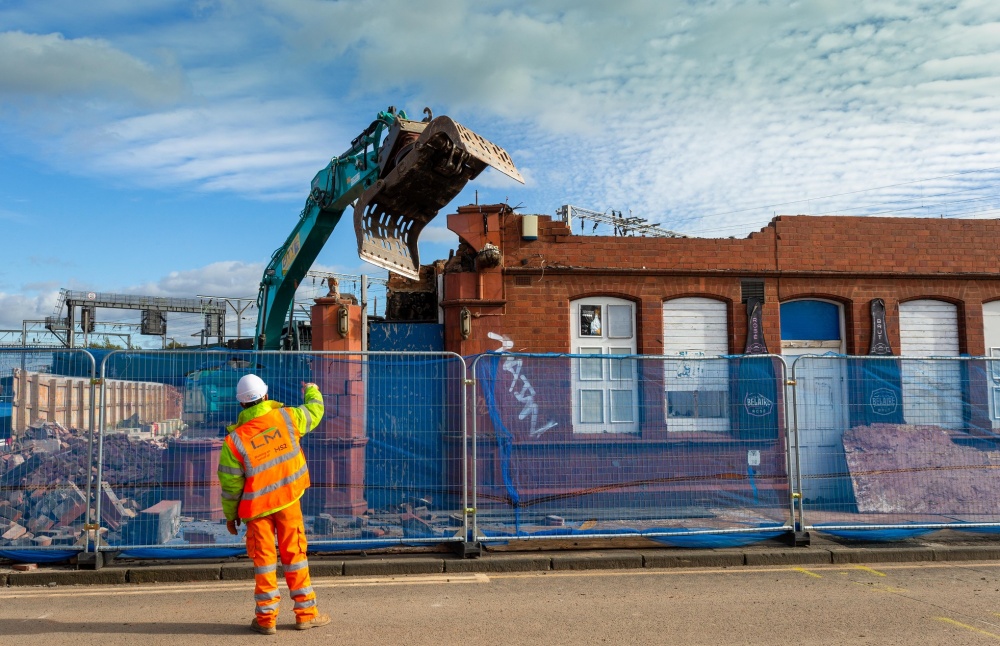 The iconic Eagle and Tun pub in Digbeth has been demolished by HS2 crews (Photo: Peter Lopeman)

Shocked Brummies are calling the demolition of the legendary Eagle and Tun pub in New Canal Street in Birmingham – which has connections to reggae band UB40 – an act of “horrific vandalism” as HS2 demolition crews tore down the landmark building.

Attempts to save this slice of Birmingham heritage by local history groups and musicians such as Ed Sheeran – who shot a music video inside the pub – failed to stop the wrecking crews from moving in on Wednesday 7 October to demolish the pub.

The history of the Eagle and Tun public house goes back a long way and has connections to Birmingham work class roots. The building first opened its door to the public during the reign of Queen Victoria.

Enraged members of the public, including former patrons of the pub, have expressed their shock and disappointment on a Facebook group page called ‘Old Pics of Brum’ where members are voicing their views about the loss of another Birmingham landmark which paves the way for the controversial HS2 project.

Members of the group have voiced their concerns that the HS2 project will not benefit the people of Birmingham because most people will “probably never be able to afford a ticket” for the fast train journey to London.

Anne Leitch, who lives in Birmingham, said: “It makes my blood boil at the way our country is being torn down all for the sake of a train that the likes of you and me won’t use because we can’t afford it.”

Ifzal Hussain, from Bordesley Green, raised the question of the price of tickets once HS2 is in operation: “Just wait until they release the price to travel on the HS2. It currently costs £180 for peak time travel to and back from London (Birmingham to Euston).

“This will save you a bit of time but how do you justify the cost of this project and how much would a ticket price be?

“This is certainly not going to be affordable. I believe its going to be like the toll roads they build. Value for money? I don’t think so.”

Katie Gallagher, from Sutton Coldfield, spoke about her feeling regarding HS2: “Sad… Billions of pounds just to get to London 20mins quicker!

Norma Evans, from Tamworth, added: “Disgraceful that this railway line is destroying everything in its path, homes, heritage, trees and woods, whole villages and why, so business men can get to London a few minutes quicker.”

People have questioned why the Eagle and Tun building was not preserved and relocated to the Black Country Living Museum or another site.

Michael Reardon, from Birmingham, voiced his anger and frustration by saying: “Brum’s motto ‘Forward’ is really just an instruction to the driver of the bulldozer.”

Nash Dhindsa, from Solihull, said: “We like destroying stunning landmarks like this in the name of progress, sad day for all Brummies.”

For some Brummies the Eagle and Tun holds a special place in their hearts because it was the place where hen parties and receptions were held, for others it was a place for wakes and private functions, while for some market traders and visitors to the city the pub provided food and overnight lodgings.

Ian Beech, from Birmingham, said: “Unbelievable, a beautiful pub with so much history and rich memories being reduced to dust.”

Members of ‘Old Pics of Brum’, which includes former and current Birmingham residents with connections to local history groups, have expressed their sadness that some of the architecture of the pub such as the ornate doors, plate-glass windows, and decorative tiles could not be saved and donated to a museum.

They claim there is a lack of understanding and respect shown by Birmingham City Council towards buildings of cultural and historical importance.

“Peaky Blinders has to be filmed elsewhere because we have hardly no old buildings left!”

Ifzal Hussain, from Bordesley Green, added his disappointment: “Its heartbreaking to see the stunning buildings with character taken down for pieces of crap they build today.

“Every time they put up a new building we lose a bit of history in its place.

“We have see so many great building with fantastic architecture and brickwork taken down and be replaced by ugly new buildings with zero character.”

The original plan to incorporate the Eagle and Tun into the HS2 building project was abandoned and the iconic pub lost the battle to save it from demolition after a compulsory purchase order was issued.

There are also concerns by some people that local buildings of historical, social and cultural significance that stand in the way of new construction projects end up being destroyed in “underhand” ways which includes “mysterious fires”. The Eagle and Tun suffered an inexplicable fire in January this year.

Lorraine Hawker, from Brimginham, said: “Anything with character in Birmingham, if they’re not getting compulsory orders they get it burnt down, all in the name of progress!”

Martin Crane, from Solihull, added: “Lots of buildings that stand in the way of something mysteriously catch fire.”

The Eagle and Tun was once frequented by world-renowned Birmingham reggae band UB40 who also shot the music video for their hit song ‘Red Red Wine‘ at the location. The cover image for the band’s ‘The Best of UB40’ album featured a photo taken inside the pub.

Ed Sheeran was another musician who shot a music video at the pub in August 2019.

Members of UB40 had appealed to Sheeran to try and save the historic pub but nothing of substance materialized.

The demolition of the Eagle and Tun has raised questions about the future of Digbeth and the surrounding area which includes The Irish Quarter which is being ‘gentrified’ according to local businesses and art hubs, and several live music venues face uncertain futures as residential apartments are constructed.

An owner of a live music venue in Digbeth, who wishes to remain anonymous, spoke to I Am Birmingham about the impact of HS2 and the planning applications that have been approved to build more high rise apartments: “I’m very concerned, and fear for my business. I’ve been here for more than two decades and now face closure as Birmingham City Council forces me to change how I operate because of local residents who’ve moved into the exclusive apartments built just up the road from my club have complained about ‘noise’.

“What I don’t understand is how the Council continues to fail Brummies and instead favours projects that benefit the rich crowd coming in from London?

“I’ve seen a massive increase of homelessness while new apartments remain largely empty in Digbeth. This is so wrong and inhuman.

“The demolition of the Eagle and Tun is a clear sign that HS2 and Birmingham City Council have no care or interest in the people of our city.”

The demolition of the Eagle and Tun will not be the last public house or social club to vanish in Digbeth. Plans are already in place to demolish the old Irish Centre (the Connaught Bar) in High Street Deritend and replace it with one of the tallest apartment blocks in Birmingham.