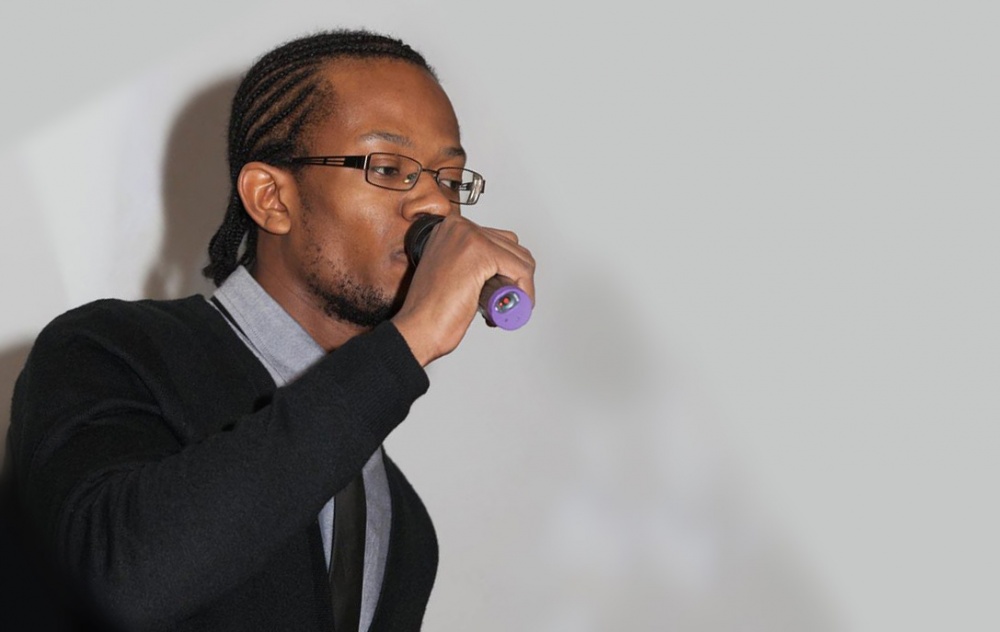 Tarik Ross-Cameron is a poet and performer from Birmingham

Spoken word artist Tarik Ross-Cameron has developed his craft over the years and now delivers creative workshops and programmes to other young individuals.

A performance poet, writer and facilitator, Tarik is an Associate at city arts collective Beatfreeks and a Development Coordinator at Punch Records. We caught up with him to find out more about his work.

How did you get into spoken word poetry?

I always had a love of words and stories as a boy, and developed a love of writing during school years. Over the years I’ve also grown to appreciate rhythm and lyricism across many genres of music, and I especially love hip hop, through which I gained my appreciation of the art of rhyme! I started writing and reading a lot more when I was at university, but I never considered performing until I signed up for one of Beatfreeks’ BACE academies in 2014.

That was ten weekly sessions with Joe Cook and Jasmine Gardosi which helped me to realise that I had some poetic skill and prepared me to perform. My first performance went well, which gave me confidence to keep doing it.

How would you describe the feeling you get when writing or performing poetry?

The feeling I get when writing can vary greatly. Sometimes it’s quite pressured work, especially if I need to finish the piece by a certain date or deadline, but other times it can be very cathartic, enjoyable and fulfilling. Occasionally, I can get into a flow state which is a wonderful feeling of channeling words from somewhere in the subconscious or beyond. Either way, I feel a sense of completion, and often a deeper feeling of release, when a piece is finally ready to be read or performed. You get to know your own work, so I know when I’ve expressed and crafted something as well as I can or when it isn’t quite there yet.

Performing is a different feeling! I do usually feel nerves to different degrees, but I ‘feel the fear and do it anyway’ (to borrow the title of the well-known book). I always have a pre-performance ‘no.2’ and as long as I’ve had time to rehearse, I just do my best once I’m on stage. During and especially after a performance, there can be a euphoria, but always a sense of connection with the live audience after sharing part of myself, which is very special.

What are the key themes that you’re most passionate about in your work?

I write about anything that I feel the need to or the urge to, which can be personal subjects or societal phenomena. I also like to retell stories through some of my performance work. Based on life experiences, a lot of my writing deals with themes that are familiar to many in the Afrikan diaspora – identity, history, family, self-knowledge, belonging and being Black and Brit(ish) – to borrow the title of another book!

Who are some of your spoken word or performance artist influences?

You’ve been part of a lot of different projects. Which have had the most impact on you?

With regard to my development, Beatfreeks’ BACE academies were the catalyst for me becoming a performance poet. Punch’s Gallery37 programme as well as Beatfreeks’ BAIT programme have impacted my writing and overall approach to being an artist. As an artist, I’ve gained and learned from every project I’ve been involved in. I feel blessed to have worked with theatres like Belgrade and The Lowry on very rewarding arts projects with young people.

Tell us about your journey with Punch Records and Gallery37.

In 2016, I was a part of the Spoken Word camp on Gallery37. It was the first time I’d been able to dedicate a whole week to working on my craft, and every fellow artist left an impression on me. Following that, I was commissioned by Punch/G37 to launch my first collection, Do What You Can, on a very special night for me at the MAC in Birmingham shared with family, friends and fellow artists. In 2018, I was invited back to G37 to support the Spoken Word camp as an associate artist. Again, the lead artists were excellent, the group was gifted and I enjoyed facilitating their collaboration with other camps.

What is your involvement in the tradition of hip hop theatre?

I can’t claim any involvement with the tradition, but I have become a student of it for sure. In 2015, I devised and performed a short piece of poetic theatre called ‘Eugene’, which is still my favourite piece to perform. In 2018, I created another called ‘The Name of the Game’, after which Roger Robinson told me that hip hop theatre could be my lane, which was good enough for me! I have been inspired by the work of Benji Reid, Arinzé Kene and Inua Elams among others.

Before lockdown, I was really enjoying developing some draft theatre scripts with two brilliant artists at Birmingham REP, which I hope I will be able to continue in the future.

It’s Black History Month during October. Why do you think this is important?

It is important but it is also not enough on its own. It’s important because in the UK there’s still a great deal of ‘Black history’ that is never taught, and the national curriculum continues to fail young Black people in very profound ways. My grandma always used to say ‘dem don’t even know dey own history’.

Based on the example set by the current political establishment, she was not wrong at all. Black History Month alone is not enough though because there is a lot more education on ‘Black history’ needed here than can be crammed into a single month. Progress is still being fought for and won over many years however, and we now have Birmingham City University’s Black Studies course as a significant example of that continued progress.

How much of what you do is about representation?

A former colleague of mine who works in a school recently told me that he’s told his students about me as an example of a Black man building a career in the arts, which I had no idea about and really made me feel humbled. I can only say that I still remember the Black men and women who I looked up to when I was a kid, and if I can be that face or that example for any young person now, that is its own reward.

There are many of us doing what we can. Additionally, a lot of my current work with Punch, Belgrade and now Maokwo in Coventry, is about building projects and programmes that improve representation in the creative sector.

What have been your struggles as a Black artist?

In truth, my biggest struggles have mostly been internal. Although I was already 23 before I really started practising my art, I feel I have been able to access a good level of support so far as an artist, based mainly in Birmingham.

The internal struggles have been combating things that lots of artists experience such as motivation and self-discipline, as well as things that Black artists are likely to experience more acutely such as ‘imposter syndrome’ and the burden of representation in white-dominated spaces that can be very wearing.

How did you overcome these?

Although I wouldn’t say I have fully overcome these things yet by any means, what I have overcome so far has been with patience, with the support of loved ones, and with my own resilience and core self-belief.

What would be your message for other aspiring Black spoken word artists?

Do What You Can! However much or however little that may be, and whatever motivates you to want to be an artist or just to write in the first place, know that your mind and your pen (or keyboard) are MIGHTY and that time invested in your craft and your ‘artist mindset’ is a great gift to yourself, and to anyone who will encounter your work.

You can find out more about Tarik Ross-Cameron’s work at his website here.