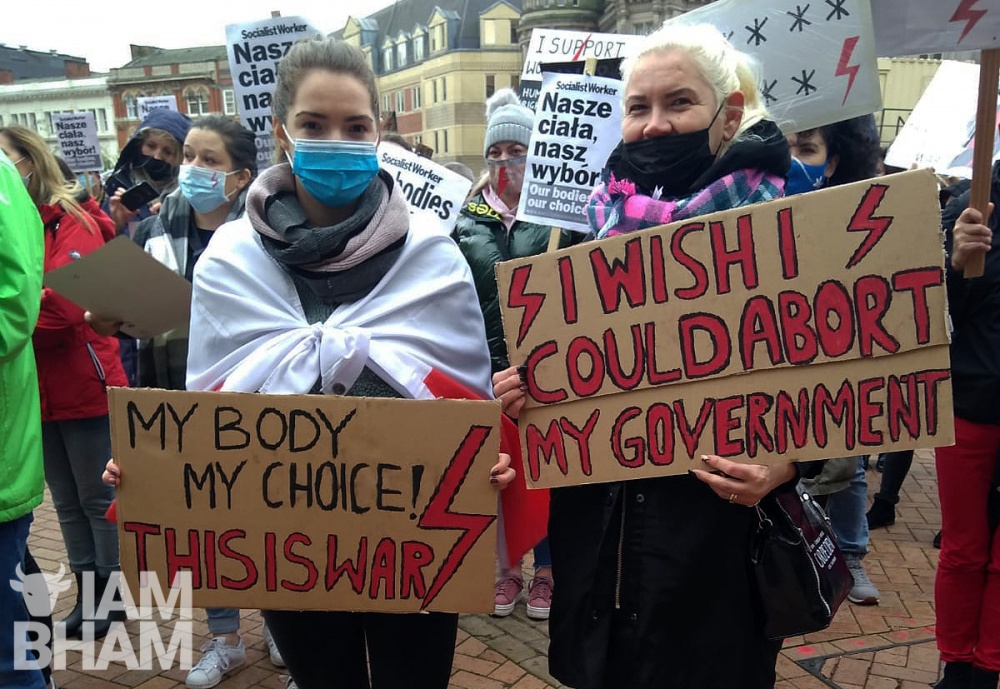 Hundreds of women have come out in Birmingham in solidarity with Polish women fighting for abortion rights (Photo: Salman Mirza / I Am Birmingham)

A rally of around 500 women has taken place in Birmingham, campaigning in defence of abortion rights in Poland.

The pro-choice protest was held in response to Poland’s constitutional tribunal declaring that abortions in instances where a foetus is diagnosed with a serious and irreversible birth defect were unconstitutional.

Attended mainly by young women of Polish heritage and their allies from around the city, activists expressed anger at the government’s restriction of such abortion procedures, which constitute about 96% of legal abortions in Poland.

The demonstration mirrored similar protests in Warsaw, Poland’s capital and largest city, which have seen over 100,000 people take to the streets to appose the tightened abortion laws in a country which already has some of the most restrictive abortion laws in Europe.

Gathering in Victoria Square outside the Council House, women displaying posters and placards chanted in English and Polish, demanding justice for women in Poland. The event – billed as ‘Piekło Kobiet (Women’s Hell) Polish Women on Strike –  was called by women from across Birmingham as a show of solidarity for abortion rights.

In a statement ahead of the event organisers stated, “We stand united to show our support for Polish women who are protesting all over Poland against the near complete abortion ban introduced in Poland. We will not be silenced by the Polish government. We will not give away our rights. We will not stand passive and watch when our freedom of choice is taken away.”

Among the hand-made placards and signs were messages including ”No Woman, No Kraj (country)’ and ‘Popieram cie, twoje ciało twój wybór! (I support you, your body your choice!)’.

“I am a Polish national living in the West Midlands. On Thursday 22nd October, Poland’s top court ruled that abortions in cases of foetal defects are unconstitutional. Poland’s abortion laws were already among the strictest in Europe, but the Constitutional Tribunal’s ruling will mean an almost total ban,” she said.

“Once the decision comes into effect, terminations will only be allowed in cases of rape or incest, or if the mother’s health is at risk. Abortions in cases of severe foetal disabilities account for 98% of all terminations carried out in Poland, therefore, this restriction effectively bans pregnancy terminations.

“Hundreds of thousands of people have been protesting across Poland every day since Thursday. The police have been using tear gas on the protesters. People, including myself, are devastated at this news. The Polish government is becoming increasingly authoritative and people fear for their rights.”

She added, “Today! Today we say enough, today we voice our opinion, loud and clear. We are not going to allow our government to take our rights away! No! Enough is enough!”

Other speakers included Sarah Teversham representing the Birmingham Trade Union Congress (TUC), which has a long history of organising mass demonstrations in the 1970s and 1980s to oppose attacks on abortion rights.

Unite West Midlands also backed the event, stating: “We stand united to show our support for Polish women who are protesting all over Poland against the near complete abortion ban introduced in Poland.”

On Friday (30 October), Poland’s right-wing president Andrzej Duda announced what he described as a “legislative solution” to the backlash, proposing that terminations in instances where birth defects are terminal would be allowed but terminations of foetuses with conditions such as Down’s syndrome would still be banned.

The recent proposals by Poland’s ruling right-wing Law and Justice party (PiS), which assumed office in 2015, have drawn international condemnation and created a political crisis.

Further protests have been planned to take place across Poland and in cities across Europe.

(Visited 2,036 times, 1 visits today)
https://www.iambirmingham.co.uk/2020/11/01/hundreds-gather-birmingham-womens-strike-abortion-legislation-poland/https://www.iambirmingham.co.uk/wp-content/uploads/2020/11/Polish-women-on-strike-Birmingham-01.11.20-crop-800x551.jpghttps://www.iambirmingham.co.uk/wp-content/uploads/2020/11/Polish-women-on-strike-Birmingham-01.11.20-crop-300x207.jpg2020-11-01T20:18:56+00:00Staff ReporterActionCommunityEventsNewsPoliticsWomxnWorldabortion,abortion rights,B'ham,Birmingham,Brum,demo. march. Victoria Square,Europe,Human Rights,Poland,polish women,Polish women on strike,Protest,Salman Mirza,speakers,Strike,West Midlands,women's rights,WomxnA rally of around 500 women has taken place in Birmingham, campaigning in defence of abortion rights in Poland. The pro-choice protest was held in response to Poland’s constitutional tribunal declaring that abortions in instances where a foetus is diagnosed with a serious and irreversible birth defect were unconstitutional. Attended mainly by young women of...Staff ReporterStaff Reporter[email protected]AdministratorI Am Birmingham
« New restricted parking zone to be introduced in Digbeth from tomorrow
Coventry man charged with triple murder in West Midlands »