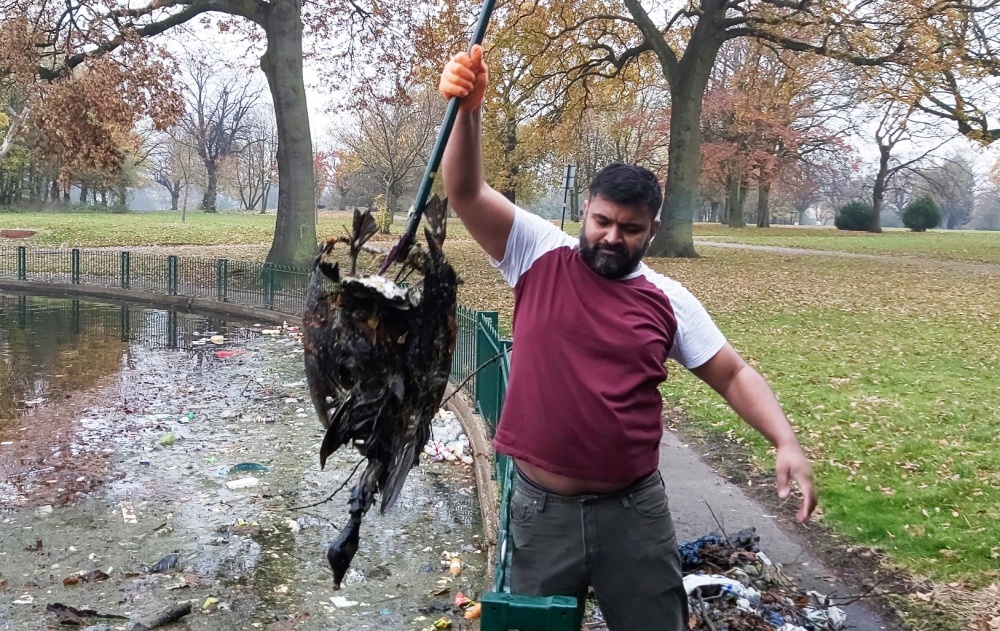 Residents in Birmingham have been forced to clear up the rotting carcasses of dead geese from a local park after the council failed to remove the decomposing animals, they claim.

A resourceful group of volunteers cleared up dead geese from the mucky lake in Small Heath Park after the dead waterfowl were discovered by shocked park visitors who then raised their concerns on Facebook, as reported in I Am Birmingham.

The distressing pictures showed a couple of Canadian geese floating lifeless in the filthy waters of the Small Heath Park lake.

Discarded fast food wrappers, and other waste material, could also be seen floating near the carcasses of the dead birds.

There was an uproar on social media with local residents demanding immediate action to clear the dirty lake and make the location safe for local wildlife.

Regular park visitor Shadia Begum told I Am Birmingham: “The lake is a health hazard. No ifs or buts. It’s really vile.

“The water in that lake looks unsafe for the wildlife, and its getting worse. You can actually smell the lake before you reach it. The summer months were horrendous.”

“I wonder what would happen if a child fell in the dirty pond what infectious disease he could catch and as a matter of health and safety if the smell is so bad surely this is a health hazard, and needs cleaning now,” she said.

Zaffar Kamal, who lives near the park, expressed his horror at seeing pictures of the dead geese.

“I was really upset to see this happen right on my doorstep. The ducks and geese in the park bring so much natural beauty to our area,” he told I Am Birmingham.

“The lake in Small Heath Park is like a sanctuary for the birds and it needs regular care and attention from environmental services.

“Sadly, the lake has been left to rot by the council. We’ve already lost the old paddling pool which was used by school kids, and unless urgent action is taken we’re going to lose the lake in the park too.”

I Am Birmingham contacted Birmingham City Council for a statement regarding the urgent issue.

“We are aware of some incidents of dead waterfowl at Small Heath Park and this is being treated as a suspected case of avian botulism.

“Staff from the council’s parks and animal welfare teams are monitoring the situation and removing dead birds for safe disposal.

“We are also working with the RSPCA to help collect any birds that are unwell in order for any necessary treatment to be provided.”

However, despite the promises and reassurances from Birmingham City Council, the local residents claim that no direct action was taken by Environmental Services to either collect the dead geese or to cleanup the dirty lake in Small Heath Park.

Malik Kareem, who lives in Coventry Road, told I Am Birmingham: “No one came out to collect the dead geese. No Council, no RSPCA. Nothing. A week’s gone by and nothing.

“How do they know what the geese died of if they didn’t take them for testing? The water in that lake looks contaminated.

“Small Heath councillors and MP do nothing. Where are they when you need them?

“The authorities have totally failed us. We need local residents to step forward and cleanup the park and make it safe for the birds and children.”

After the alleged ‘failure’ of Birmingham City Council to take any action some local residents took the matter into their own hands to cleanup the lake.

A group of faith inspired volunteers volunteers called The Waste Warriors carried out a cleanup of the lake on the afternoon of Sunday 8 November to remove the rotting carcases of the geese and clean up sections of the foul lake.

Ali Akbar, from The Waste Warriors, spoke exclusively to I Am Birmingham about the challenges faced by the team as they carried out the task of removing the dead carcasses and cleaning up mess around the perimeter of the lake.

“We went to Small Heath Park and our main focus was the pond after I Am Birmingham and social media reported a local sighting of dead ducks,” explained Ali.

“We decided to send out our volunteers. This was a challenging task as normally we work on the ground and this time it was in the pond.”

Ali told I Am Birmingham that he tried to source some specialist equipment for this cleanup operation but it proved difficult.

Despite the challenges faced by the team they adapted their tools in an inventive manner to overcome the hurdles of cleaning the lake.

“The Waste Warriors were a bit like the ‘The A-Team’. Remember that show from the 1980s? The heroes would make tools from out of bit and pieces in any given situation.

“Well, Mike cobbled together bits and pieces and made a ‘fishing tackle’ type of tool with the head of a rake tied to the end of a rope.”

Using their makeshift tools the volunteers were able to drag out some of the waste material that littered the edge of the filthy lake.

“We did ask the Council for some equipment and received some plastic bags,” said Ali.

The team said that all the volunteers obeyed the current COVID-19 guidelines and social distancing was observed as they worked to fish out the carcasses, including the discarded rubbish, floating on the surface of the dirty lake.

Ali praised the efforts of the team and added:

“Waste Warrior Asif found the dead goose and he removed it from the contaminated pond. Team member Bilal swept up the litter that was being fished out of the lake.

“Mike, a new member to our team, was amazing with his inventive tool, and his energy inspired us.”

According to Ali the work to remove the rubbish in the lake was exhausting and difficult, and the team realized that the task of cleaning would take far longer than anticipated.

Some of the park visitors spotted the team clearing out the lake and offered to volunteer and speed up the painstaking process.

“We had two young volunteers who joined us after they had finished doing their regular park exercises. Many thanks to them for their contribution,” said Ali.

The volunteers from Small Heath said they also spoke to some people about the dangers of feeding the birds after spotting two park visitors who were feeding the ducks.

“We’re planning on sharing leaflets with local people about the hazard of feeding the ducks and birds. These poor birds can’t handle white bread. Some people have no idea about the dangers posed by such feeding,” explained Ali.

“The bins are always full whenever we come to the park to carry out a cleanup. Everything single time we’ve come its the same. The litter is falling out of the crammed bins and with the autumn weather the trash gets shifted to all areas of the park. Some of it is carried into the lake by the winds. The plastic in the water is a deathtrap for the ducks and geese,” said Ali.

I Am Birmingham contacted Birmingham City Council for a response about why the reported carcasses of the waterfowl had not been collected and that a local group of volunteers from Small Heath had rallied together to clean sections of the lake. A response was received on Monday 9 November.

A Birmingham City Council spokesperson said: “Daily inspections are conducted at the lake and if any issues are spotted or reported, such as dead birds, they are raised with animal welfare officers.

“Dead birds are then removed and disposed of in a way designed to protect the public and other wildlife.

“Officers are also working in conjunction with the RSPCA to retrieve any sick birds and obtain veterinary treatment where possible.

“As such, we would ask volunteer groups to not handle any dead or sick animals they may spot – and instead report dead animals to ourselves or sick ones to the RSPCA.”

However, locals claim the lake remained filthy and no officially sanctioned cleanup operation took place at the site.

The group of volunteers bravely returned again to the location last weekend, and despite the wet and unsettled weather, they carried out another valiant attempt to clear the foul lake in Small Heath Park.

“The lake needs to be cleaned urgently. It’s in a real state. The slow response from the Council is shocking,” Ali told I Am Birmingham.

“Unless action is taken we could lose more wildlife in the lake. The situation is really awful and we’re not getting much help from the authorities.”

The Waste Warriors team have been clearing up parks, streets, and places of worship, and making sure the areas are safe for local people. In recent months the team have cleared up needles, dead birds, fast food trash, marijuana packets and hazardous waste in several Birmingham areas.

The name of the group was inspired by a cult 1970’s film called ‘The Warriors’, and the volunteers were amazed as they cleared the rubbish in the mucky Small Heath Park lake and a couple of local people stopped by to talk with the team.

“We met Azar and Jezz taking the dog for a walk in the park. They’ve lived in Tennyson Road, opposite Small Heath Park since the 1970’s,” said Ali.

“Azar came today for his 50th birthday for a wander around the park and he shared a memory with us. He told us that he and Jez both went together to Coney Island, New York, where some of ‘The Warriors’ movie was shot.

“It’s so lovely to share memories and keep alive the community spirit in the area.”

One of the things that Ali tries to do in his role at The Waste Warriors is raise environmental and social awareness and inspire the youth.

“One of the young volunteers who joined us in the park said he does boxing and comes to the park for jogs to gain his stamina. It’s so good to see the youth engaged in positive activities in the park.”

Ali visits schools and mosques, and attends community meetings, where he chats with young people about the importance of looking after the environment and keeping it safe for humans and wildlife.