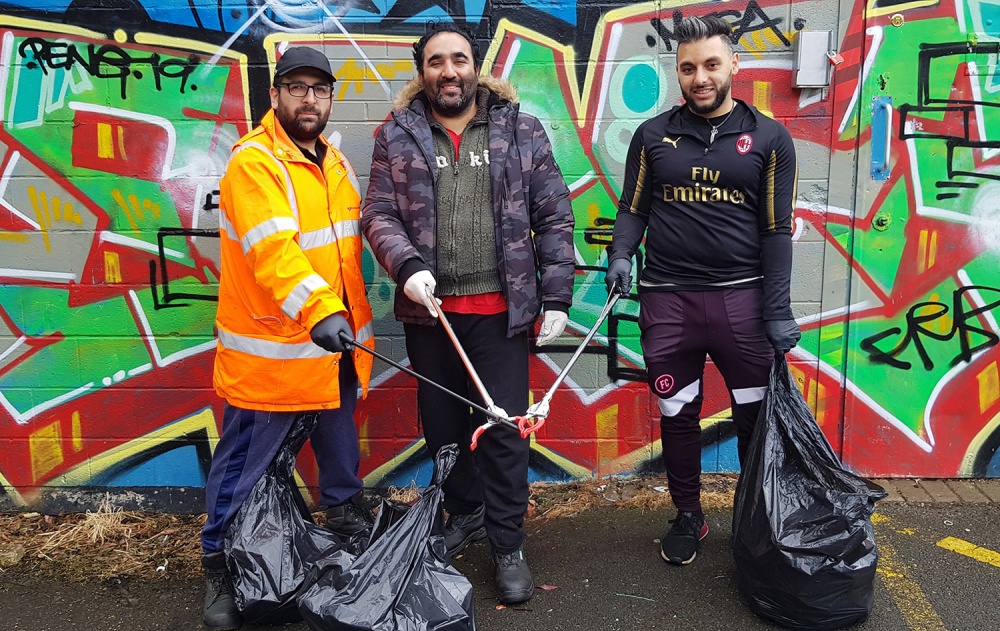 A group of Brummies from Small Heath have formed a volunteer group to cleanup dangerous drugs waste from streets and parks across the Midlands region to motivate communities and to make families feel safer when visiting parks.

A group called the Waste Warriors have been conducting cleanup operations in Birmingham and the Black Country and removing dangerous and hazardous rubbish left behind by drugs related activity or by visitors to parks during the coronavirus lockdown.

The team members say they are proud to be British and are inspired by their Islamic faith, and hope their volunteer work brings some positive change for a shared humanity following recent tragic events in America.

Ghulam Ali Akbar is the team leader of a new community group which was formed to address the rise of anti-social waste in local parks.

Ali and members of the Waste Warriors team spoke exclusively to I Am Birmingham and they told us what inspired them to set up the community volunteer project to cleanup streets and parks in Birmingham which are plagued by leftovers from anti-social crime and disorder, including hazardous pharmaceutical material such as syringes and needles left by drug addicts.

Explaining that the group’s name was “inspired by a cult 1970’s film called ‘The Warriors’ –  a Walter Hill movie about a group of friends trying to get back to home turf and making life-changing sacrifices in their attempts to escape from an urban jungle filled with fear and paranoia – Ali said the theme of solidarity and diversity struck a chord with him.

With themes of friendship across racial borders, self-improvement, and rising up against the odds in mind, Ali was inspired to form a group with the core idea of cleaning up local parks that had become “no-go” zones for families and children.

Ali said he witnessed first-hand the decline in park and youth services and the rise of an anti-social element as police resources and patrols were reduced in the Small Heath area.

Drug dealers, drug addicts, and an increase in the number of fast food outlets in local areas has resulted in litter, including dangerous waste, being left behind in public spaces such as Small Heath Park.

The Waste Warriors team members have been safely disposing a long list of hazardous waste which they have collected from local parks and streets.

Some of the material picked up by the volunteers includes needles, syringes, condoms, micro cannabis bags, razors, and nitrous oxide canisters.

Ali said: “The problem is very serious and getting worse, especially with the coronavirus lockdown.

“More people are using the parks and more litter is being left behind.

“Most of the park bins are overflowing and its weeks before council services empty them.

“Park ponds are contaminated, and fast food trash is making the environment unsafe for local wildlife.

“And there’s a rise in drug abuse in parks which is very alarming and very open.”

Ali added: “When we first started we only had two members in the group but in a matter of weeks the number had risen to ten, and more people are showing interest in joining as news of our activities are shared on social media.

“Some of the volunteers are laid off work, while some members finish work and then come and join us to volunteer with projects.

“We initially lacked equipment and literally used our hands to pick up the trash which was very risky.

“Thankfully, we now have litter pickers which makes our cleanups safer and more hygienic for the team.”

Local residents in Small Heath are upset with their MP and councillors for a lack of engagement.

Online criticism has been growing and park services are at an all time low according to the Waste Warriors team.

Amongst their complaints are that grass is rarely cut, bins remain uncollected for long periods in the park, and there is no regular policing around the park despite an increase of gang-related drug and prostitution activity in and around the park.

The litter left behind on the grass by coronavirus lockdown crowds is not exclusive to Small Heath Park.

The rise in litter has resulted in the Waste Warriors being active across several areas in Birmingham including Small Heath, Sparkhill, Saltley, Alum Rock, Bordesley Green, Ward End, and there are cleanup projects penciled in for Dudley in the days ahead.

Ali aims to use the cleanup operations to engage with local communities and build up morale and confidence and remove some of the pain and fear.

He said: “There is so much doubt, misery, and pain. People are losing confidence.

“I hope the cleanup operations and talking to local people helps to get confidence back in the community.

“We’re hoping our work inspires parents and children to take responsibility and keep the area around their houses litter free after we finish a cleanup operation.”

Waste Warrior team member Kamran Ali added: “The main reason I happily volunteer is to clean the parks and to make people aware that dropping litter and waste is not a positive thing to do.

“Keeping the parks clean is vital and it also keeps the atmosphere and the climate clean.

“Cleaning up after us keeps God’s earth clean and it blesses the heart and soul.”

The Waste Warriors not only tackle litter and anti-social activity, but also take part in the removal of offensive graffiti.

The team recently removed tags from the wall of the mosque in Chapman Road.

Ali said: “We removed graffiti from the mosque wall yesterday and with the experience gained we plan to protect and offer help to any place of worship which suffers vandalism such as graffiti.

“Whether it’s a church, mosque, synagogue, or a temple, we’re here to help.

“These are all places of God.

“Everyone is welcome to join the Waste Warriors team regardless of race, religion or social background.

“This is what makes Birmingham such a diverse and special city.”

Ali also mentioned his concern about the negative influence of drug dealers on local children.

“The children see us during our cleanup in their parks. We talk to some of them and tell them to be careful of drugs and report it,” he said.

“And if our team members see any criminal activity we report it to the police and also share the information with other community groups to stamp out this crime.”

He added: “It was originally litter that we were picking up but drugs paraphernalia is now becoming more common.

“We collected heroin needles outside All Saints Church in Herbert Road.  And around the corner in Sara Park we discovered helium canisters and micro cannabis bags.

“Parks are being used by drug dealers and drug addicts, and young people get attached to it.

“We’ll keep talking to the kids to stay away from drugs.”

The Waste Warriors also carry out youth work and visit schools and mosques to talk to children about the dangers of drugs and anti-social behaviour such as bullying and racism. Faith plays an important role for the Waste Warriors team.

“We want to hold the light and spread some good news in the name of Islam. We were born and raised in England, and this is our home. We must take care of it. We will motivate the young and tackle the litter and drug problem.”

Waste Warrior team member Hussnain Ali, added: “We were born in this city and grew up here. Birmingham is home.

“As Muslims we are taught to respect the land we live on.

“There are more people coming into parks now because of coronavirus and we don’t want them to see litter.

“We especially don’t want little kids to see drug needles, canisters and marijuana packets around the floor where they play.

“Birmingham is a great place and we want to keep it that way for the next generation.”

“Back in the 1990’s I used to live opposite Small Heath Park in Tennyson Road.

“People were more happy, areas were very clean and most importantly it was safe especially for the children.

“But now fast forward to 2020 things have changed drastically.

“I decided to join the Waste Warriors because I want to be an inspiration to the next generation to stay clean and to live a happy childhood that I once experienced.”

The group want children to be actively engaged with their environment.

Team leader Ali said: “Our mission is our children. We want to empower them and teach them to be more mindful and works towards an eco-friendly planet.

“The generation that comes after us must be better informed and equipped to look after the local area and ensure the environment and wildlife are cared for and protected.

“We need young people to lead the way as they are the future.

“We need to focus on the basics and go from there instead of sitting on a keyboard somewhere blaming each other.

“The time has come to take some action and make some positive change.”