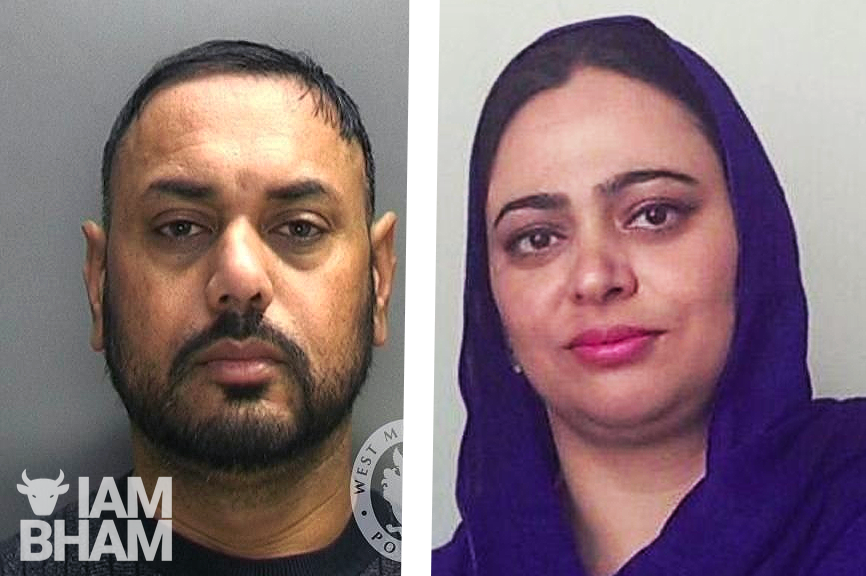 A callous liar who betrayed the trust of his family and friends by pretending his wife had been killed during a burglary at their home has been found guilty of her murder.

Gurpreet Singh, aged 45, was found guilty of the murder of Sarbjit Kaur following a trial at Birmingham Crown Court today (27 January) and has been sentenced to 19 years in prison.

West Midlands Police were called to Rookery Lane, Wolverhampton, on Friday 16 February 2018 by Singh who told officers he’d found his 38-year-old wife unconscious in their home.

Sarbjit had been assaulted and had been dead for some time and a post-mortem revealed she died of asphyxiation. The house initially looked as if it had been burgled and Singh was showing signs of shock and horror at what had taken place.

A murder investigation was immediately launched, detectives believed they were looking for a burglar or burglars who had carried out this atrocious crime.

Fear within the local community was high with many concerned there may be a gang at large who were breaking into homes and capable of killing anyone that got in their way.

It quickly became clear to officers that the burglary was in fact staged after a detailed forensic examination highlighted it was no ordinary burglary scene. The force’s specialist and experienced forensics team, who examine many burglary scenes, were adamant it was no burglary – but an attempt to create an illusion of a messy search.

Singh was therefore interviewed as a potential suspect, during which he provided a plausible account of events that morning, saying he’d been alone with his wife for about an hour after dropping his children off at school before going to work.

Checks carried out by police confirmed his account of his whereabouts and showed he’d made calls while at work during the day to his wife which she didn’t answer. Singh was then released on police bail.

Detectives carried out an extensive CCTV trawl during the investigation. Singh’s own CCTV was disabled, however CCTV from a neighbouring house covered his drive which was accessed via electronic gates.

The CCTV showed Singh take his children to school and return as he’d described. However, shockingly it also revealed an unknown person wearing a parka coat with the hood up approach the house and be let in at around 8.15am. Singh is then seen at around 9am opening the boot of his car, going back into his house and then returning to his car and driving off to work.

Four minutes later, a person is shown to move away from the house and after a short gap the person in the parka coat is seen walking away from the house. Extensive enquires were made to trace this person but to date they have not being identified.

This became a crucial turning point in the investigation as Singh never mentioned this visitor. He’d told detectives when asked that it had just been him and his wife at home.

Other factors, such as the electronic gates, which could only be opened with a key fob or code for the keypad, the burglary element, where many items of high value had been ignored, the fact there was no evidence of forced entry into the house, began to add further doubt to Singh’s account.

Superintendent Chris Mallett, the senior investigating officer, said: “While the motivation of Sarbjit’s murder is unclear, Singh is clearly a callous and calculating man with complete disregard for human life. He’s shown no remorse for his actions and continued to deny his involvement, despite the weight of evidence against him.

“Shockingly Singh went about his daily business and allowed his own children to enter their home and find their stepmother dead on the floor.

“The distress this caused those poor children, who’d already lost their mother, is sickening.

“Sarbjit’s family have shown great courage and dignity throughout this retrial and I hope today’s guilty verdict offers them some comfort.

“This has been a complex investigation and Singh’s motive will remain a mystery. We’re still keen to hear who his accomplice is and I’d ask anyone with any information to do the right thing and tell us what they know.”

Sarbjit’s niece, Jasmeen on behalf of her family, said: “We have been deeply disturbed by the death of Sarbjit. No one can understand what could have led to her murder.

“The grief leaves us dumbfounded. Losing someone is always very sad and painful, but losing a loved one in these circumstances is traumatic.

“Sarbjt’s death was so sudden, unanticipated and violent, it has shaken the whole family’s sense of safety, control and trust in the world around them.

“I’d like to express my thanks to the QC, Mr David Mason, for his dedication and commitment throughout this long and complex investigation and who has helped get justice for Sarbjit and her family.”

(Visited 261 times, 1 visits today)
https://www.iambirmingham.co.uk/2021/01/27/gurpreet-singh-found-guilty-murdering-wife-family-home-blaming-burglars/https://www.iambirmingham.co.uk/wp-content/uploads/2021/01/Gurpreet-Sing-found-guilty-of-murdering-his-wife-Sarbjit-Singh-800x532.pnghttps://www.iambirmingham.co.uk/wp-content/uploads/2021/01/Gurpreet-Sing-found-guilty-of-murdering-his-wife-Sarbjit-Singh-300x200.png2021-01-31T20:25:50+00:00Staff ReporterCrimeNewsarrest,Birmingham Crown Court,Chris Mallett,Court,detectives,Forensics,Guilty,Gurpreet Singh,husband,Investigation,Jasmeen Kaur,murder,murdering,Rookery Lane,Sarbjit Kaur,sentenced,staged burglary,Superintendent Chris Mallett,West Midlands Police,wife,WMP,WolverhamptonA callous liar who betrayed the trust of his family and friends by pretending his wife had been killed during a burglary at their home has been found guilty of her murder. Gurpreet Singh, aged 45, was found guilty of the murder of Sarbjit Kaur following a trial at Birmingham...Staff ReporterStaff Reporter[email protected]AdministratorI Am Birmingham
« Woman attacked and robbed in her own home after meeting man on dating site
Two teenagers charged with murder of 15-year-old Keon Lincoln in Birmingham »