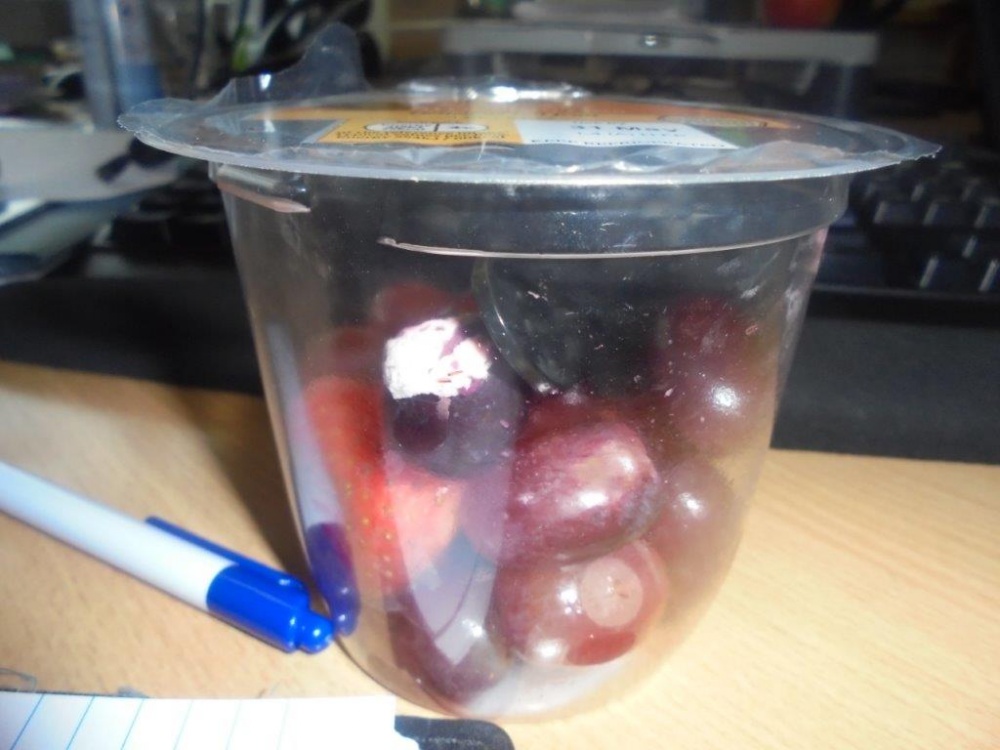 A pot of out-of-date grapes and strawberries, with mould growing on one, found at Tesco Express in Carrs Lane

Tesco Stores Limited has been fined £7.5 million at Birmingham Magistrates Court yesterday, after pleading guilty to selling food which was past its ‘use by’ date in three of its Birmingham stores.

Tesco Stores Ltd – which has its Registered Office in Tesco House, Shire Park, Kestrel Way Welwyn Garden City – pleaded guilty to a total of 22 offences across the three stores, which totalled 67 separate items, at Birmingham Magistrates Court on 21 September 2020.

The first incident was at Tesco Express, 165 Linden Road, Bournville, which officers visited on 17 June 2015 after receiving a complaint from a member of the public – and found six items on display beyond their use by date.

Following discussions between the city council and Tesco, officers were invited back to do another check on 12 April 2016 – when officers found various items on display including own-brand pizza, doughballs, soup, pork belly slices, potato salad, trifle and flavoured milk, out of date for between 17, 4, 3, 2 and 1 days.

Environmental health officers received a separate complaint on 25 May 2017 and visited the Tesco Metro store at 2042-2052 Bristol Road South, Rubery on 1 June 2017 where they found 25 items displayed for sale beyond their ‘use by’ date – including own-brand scotch eggs, Quiche Lorraine, and Little Dish (children’s meals) Chicken and Veg Risotto and Pasta Bolognaise.

On visiting the third store – Tesco Express in Carrs Lane, in the city centre – on 2 June 2017, own-brand Falafel and Houmous Wraps, Grapes and Strawberries, and Berry Medley pots were on display past their ‘use by’ date – with grapes having visible mould.

Mark Croxford, Head of Environmental Health for Birmingham City Council, said: “Supermarkets have a duty of care to ensure the food and drink they display for sale are in date and therefore safe to consume – however visits by our officers and the public complaints show this is not always the case.

“The purpose of the use-by date is to protect the health of the consumer. The manufacturers put the date on their products to guarantee the food is safe and ignoring this date completely undermines consumer safety.

“There were numerous missed opportunities to check the dates on these products and remove them from display – and the fact incidents were found on several occasions, in different stores and over 14 months, is a major concern.

“This case offers a warning to all retailers to ensure their stock is in date and that if found to be breaching these regulations we will take action – as we have successfully done against one of the UK’s biggest supermarket chains.”