‘Be Bold, Be Birmingham’ street art mural unveiled in Digbeth 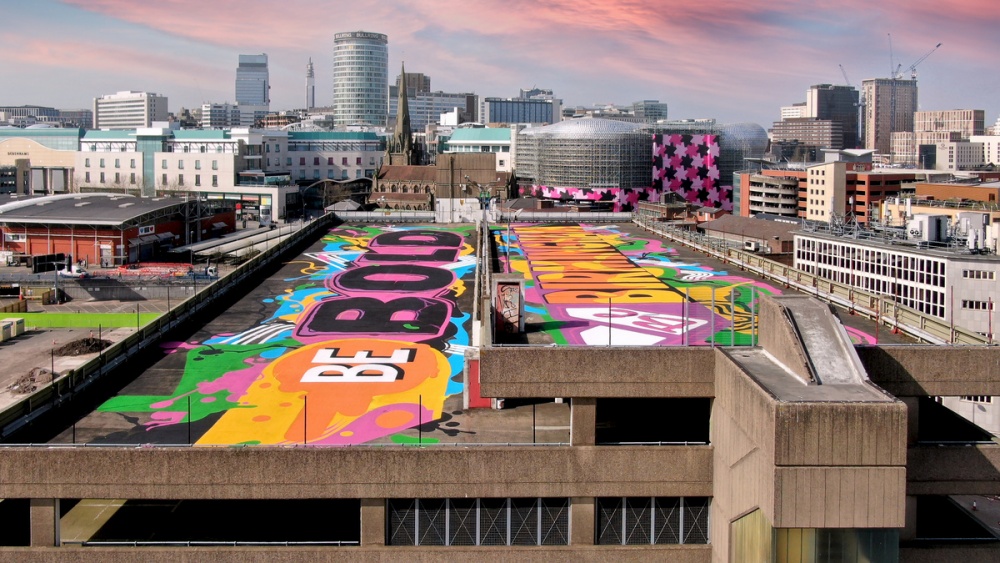 A stunning new street art mural was unveiled today on a rooftop in Digbeth by city artist Gent 48.

Selly Oak artist ‘Gent 48’ – real name Joshua Billingham – was commissioned by Birmingham City Council to create the artwork to celebrate a new era for Smithfield Birmingham, as part of the city council’s Be Bold, Be Birmingham initiative.

Joshua’s bespoke mural is emblazoned on the roof of the former Markets Car Park in Moat Lane, Digbeth.

The Be Bold, Be Birmingham street art mural marks the beginning of one of the most significant development opportunities in the city centre.

The council suggests Smithfield Birmingham will be “a bold, brand new innovative and sustainable city quarter that will provide local jobs, amenities and over 3,000 much needed new homes for the city, as well as opening up wider opportunities for regeneration.”

The £1.9bn 17 hectare development will anchor an expanded city centre, helping to accelerate a wider transformation of Birmingham and support long-term economic and social prosperity within the region.

Joshua’s unique design for the temporary artwork took eight days to complete and covers the entire surface of the car park roof.

“I knew it was going to be challenging but then I thought if I’m painting a statement telling other people to be bold, I should be bold myself.

“I just love to paint. I didn’t do so well at school, but I was always passionate about drawing and painting. It shows that if you stick at something and you’re passionate it can pay off for you.”

Be Bold, Be Birmingham was launched earlier this year and is a campaign propelling Birmingham and its people to the forefront showcasing creativity, diversity, ambition and uniqueness.

“We want people to be really bold about their city and Be Bold, Be Birmingham is the ideal message.”

Be Bold, Be Birmingham

Birmingham City Council has been spearheading the campaign to promote Birmingham’s positive values to coincide with upcoming international events in the city and the regeneration of its landscape and public opportunities.

As part of its ‘Be Bold, Be Birmingham’ initiative, a mission statement from the council states:

“Birmingham as a city and its people are exactly those words, but for too long Birmingham has shied away from the spotlight until now.

“Be Bold, Be Birmingham was born from Birmingham hosting the 2022 Commonwealth Games. A bold move to become host city and prepare for an international multi-sport event with only half the time normally required to prepare for such a sporting and cultural extravaganza.

“The eyes of the world will be on Birmingham in 2022, in fact 1.5 billion global TV viewers are expected to watch the Commonwealth Games! The Games are the catalyst to propel Birmingham to the forefront. Let’s show the world what a proud, young, creative, vibrant and diverse city Birmingham is.

“In the past, Birmingham has had to put up with negative connotations, stereotypes and being classed as the ‘second city’. Now is the time for this to stop. We are not the second city; we are a pioneering city of firsts and we are going to tell and celebrate our city’s story to the world.

“From the bold street art scene in Digbeth to the bold plans for cleaner air, Birmingham is a unique city which has always sought to improve, grow bigger and do better. We are a city which accepts all people.

“And look forward we will as a collective. Birmingham can have it all, but we all have a part to play. We need to be bold, go out there and tell the world how great our city and people are. Birmingham is the city.”