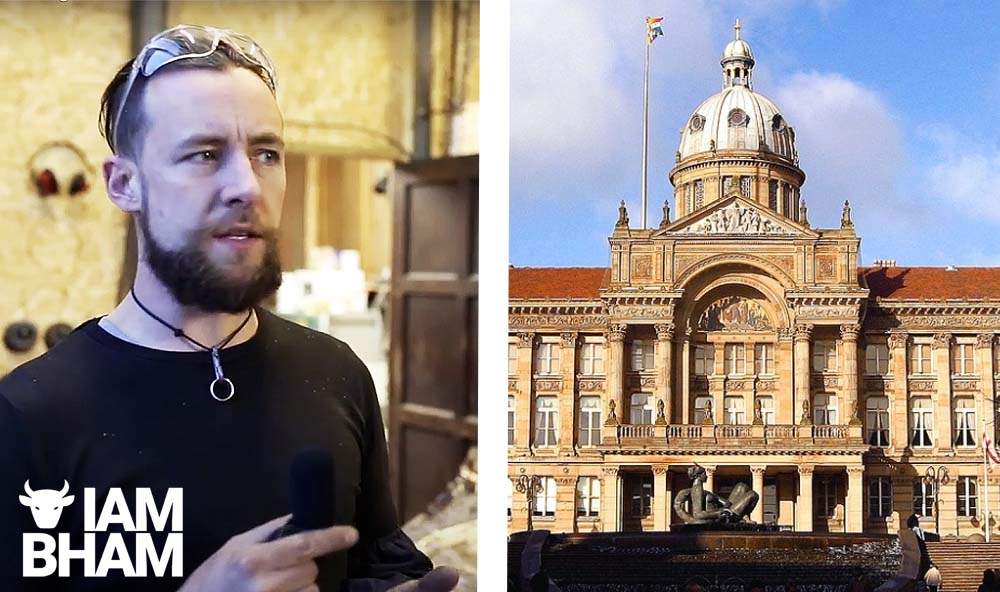 Birmingham’s diversity, creativity and spirit will be celebrated in a new artwork due to be unveiled in the city centre later this week.

Forward Together is a reimagining of the city’s crest being raised by a line of 25 figures, designed by artist Luke Perry and made by a team of his friends, some of whom had never worked with in a factory or with metal before.

Inspired by the city’s motto Forward, the distinctive new landmark brings together a collection local people as the steel silhouettes who the team regard as extraordinary, everyday people.

Luke’s background is in public art, representing those that are underrepresented, and his team created Forward Together to address the imbalance of representation in public monuments.

The 13-metre long installation was built over 14 days by Luke’s team – who also represent the region’s diversity – who were trained at his Cradley Heath factory where it was made.

The reimagined Forward crest includes quotes from Benjamin Zephaniah’s poem We Refugees – “No one is here without a struggle” and “We all came here from somewhere.”

The installation – which be on display in the city centre for 12 months – will be unveiled in Victoria Square on Sunday 4 July at 4pm.

Cllr Ian Ward, Leader of Birmingham City Council, said: “I’m looking forward to unveiling this impressive piece of work which reflects not just the diversity of our great city, but also what can happen when people work together.

“The fact that Luke has been inspired by local people with extraordinary stories to illustrate the diversity of our city and how we can come together to achieve things is a great message for Birmingham – and beyond.”

Luke, who will be unveiling the statue with the Leader, said: “In recent years, there seems to be a growing mood of opposition in the world: we all are encouraged to find our tribe, pick a corner and cram ourselves into a pigeonhole.

“Forward Together is a view of an alternative world, yet one that exists and is working if we choose to see it. We can all pull together to raise our society out of the shade.

“It was the greatest honour to be able to work with friends to create this piece and to celebrate people who do not have their share of credit.

“I hope this artwork is a small part of the massive movement to unite, rather than divide, our communities: we just need to see our common loves rather than our exclusive differences.”

Forward Together has been independently commissioned as part of a new television series, due for broadcast later this year.

Visual creative Luke Perry has an accomplished background in public art, representing those that are underrepresented.

Forward Together was designed by Luke to represent the rich diversity of the Midlands and the UK. His team built it to address the imbalance of representation in public monuments.

Those that have seen it, including Benjamin Zephaniah, state that this is a “symbol of Birmingham and the Midlands”.

Others have said it’s a great masterpiece for diversity or simply a monument that demonstrates what happens when people work together, supporting the city’s ethics and values.

Luke’s team who in themselves represent the diversity of the Midlands were trained in his Cradley Heath factory, where this monument was made.

The artist and his team were determined to use real people as models to represent the city in this artwork – and in doing so retain the integrity and soul of the message that together we are stronger.

Forward Together is an empowering piece that allows people to represent themselves that can be copied and adopted for anywhere in the world. We are proud to have done this simple concept for our Forward city.

Who is sculptor Luke Perry?

Luke Perry is a Black Country artist from the West Midlands, known for his monumental sculptures.

With a focus on celebrating industrial and underrepresented communities, particularly in the Black Country, Luke’s work has previously seen him create and unveil a powerful ‘Lions of the Great War’ statue in Sandwell, honouring Sikhs who fought in World War I.

He also co-presented the Channel 4 television series Titanic: The Mission, in which he and three other modern-day engineers attempted to rebuild sections of the ill-fated liner, using the tools and techniques of the early twentieth century.

Earlier this year, the artist created a 4-foot steel mesh angel sculpture in Bearwood, as a tribute to NHS and care staff bravely battling against the coronavirus pandemic.

In December, he also revealed plans for a 10-foot Wolverhampton memorial to 19th century Sikh soldiers.

A former alumni of Birmingham City University’s Institute of Creative Arts, Luke is founder and director of Industrial Heritage Stronghold, a not-for-profit organisation which aims to “build public artworks which celebrate our industrial heritage in a very real way”.

As part of his BA (Hons) Fine Art degree, Luke also made a number of short documentary films, one of which won the Bronze medal at the London International Short Film Festival.

As a result, he worked in the film industry after graduation for a short while but on realising his heart still lay in sculpture, he returned to his native Black Country, where he won his first commissions and set up Industrial Heritage Stronghold.