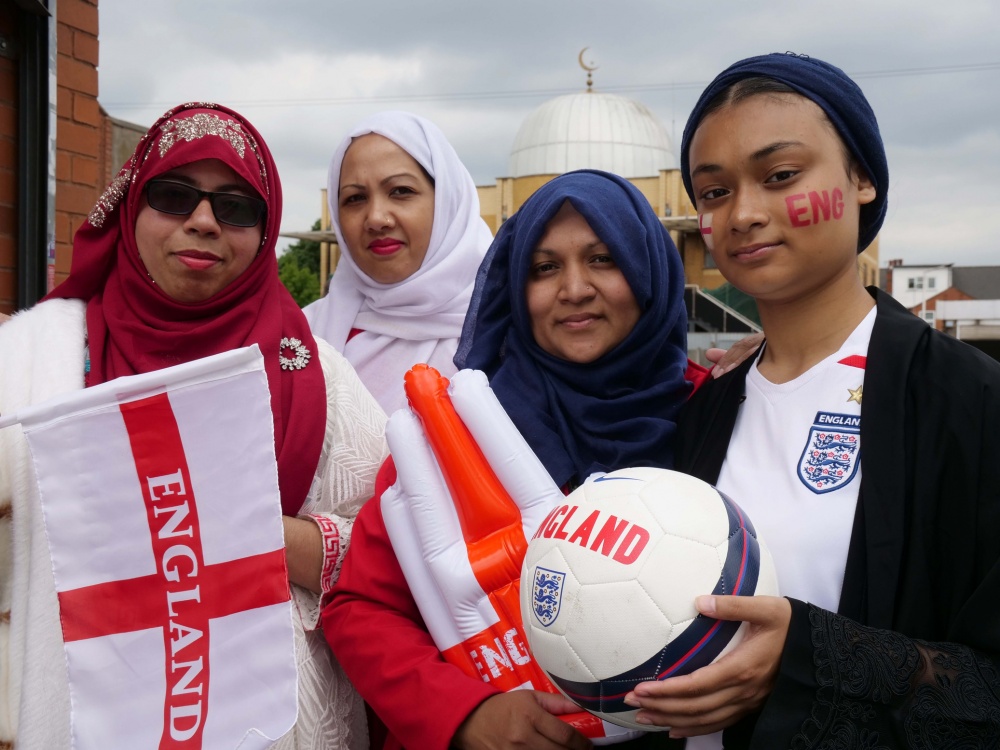 A group of Muslim women from Birmingham are backing England to win the Euro final after revealing the national team have inspired their sense of belonging in the community.

Paying tribute to the England squad’s anti-racism stance and diverse team members, the keen football fans from the Aston neighbourhood have said they feel proud of the professional footballers embracing patriotism alongside principles of social justice.

The women – ranging in age from 16 to 63 – are also holding a special torch for England midfielder Jack Grealish and defender Tyrone Mings, both representing their local Aston Villa team.

The England team have been very vocal about racism during the European Football Championship, with Mings speaking out in defence of the decision by players to ‘take the knee’ in support of the Black Lives Matter movement.

The team’s decision to challenge bigotry has divided opinion for many fans but Shamsun Choudhury, who works at women’s empowerment centre Saathi House, explained it was a step towards greater peace and unity in society.

“Just before the pandemic, we were the first group of Muslim women to act as flag-bearers during a game at Aston Villa Football Club, in front of thousands of fans. It was initially intimidating for us and a bit alien for fans in the stands but it helped break the ice and started a positive conversation.

“We’ve attended a few games at the club and all sides are now welcoming this. We’re building bridges and addressing prejudice is key to this. Standing on the pitch with the players was a proud moment for us and an important step in fighting racism in sport.”

Community engagement hub Saathi House is located opposite the Aston Villa Football Club in Trinity Road and plays an important role in community relations at the venue.

“Our Villa boys Tyrone Mings and Jack Grealish are now representing England in the final and have also been taking the knee. These public statements are important and make marginalised communities feel more included. We couldn’t be more proud of them all,” added Shamsun.

Zarah Begum lives in Aston and has been cheering on England with her mum Lutfa Begum.

Zarah, 16, said: “Football is for everyone and should be accessible by everyone, regardless of age, gender or background.

“We’re working with Aston Villa to stamp out racism and our team players have been doing a sterling job representing England in the Euro championships.

“The England team’s solidarity with Black Lives Matter and standing against racism has a direct impact on fans, especially those from minority communities.

“It’s inspiring to see such unity. We need less of ‘Go Back Home’ and more ‘It’s Coming Home!”

Her mum Lutfa, 39, volunteers with Saathi House and felt the current England squad was more relatable to migrant communities:

“Over two thirds of the current England squad is made up of players with migrant backgrounds. This is important to who we are as a nation.

“Here, we’re mostly Muslim women from Bangladeshi, Indian and Pakistani backgrounds but sport has brought us together with women of many languages, faiths and ethnicities.

“Immigration and diversity is good for this country.”

Meena Bibi, 47, runs physical activity sessions at Saathi House with women who have been motivated by England’s efforts in the football tournament.

“It’s nice to be able to come together as a community again. The pandemic has disproportionately affected the health of people from Black and Asian communities.

“I run a walking and cycling class for the group and sport has been vital in getting our women active again! Watching England doing so well in Euro 2020 is inspiring everyone to do more!”

Mum-of-two Sadia Sharmin, 37, has lived in Italy for over a decade but now resides in north-east Birmingham.

She attends Saathi House to improve her English and develop her confidence skills with charity Migrant Voice, also based at the centre.

During the last few weeks, she has also been joining others within her social bubble to watch the Euro football matches.

“I’m British and Italian but I’ve been living here now for 4 years and me and my children have always felt more welcome here so we’re supporting England, a more multicultural team, more representative of us as a country.

“My husband still supports Italy so it will be a bit crazy at home on Sunday during the Euro final, but it shows we can all have different views and colours and still get along!”