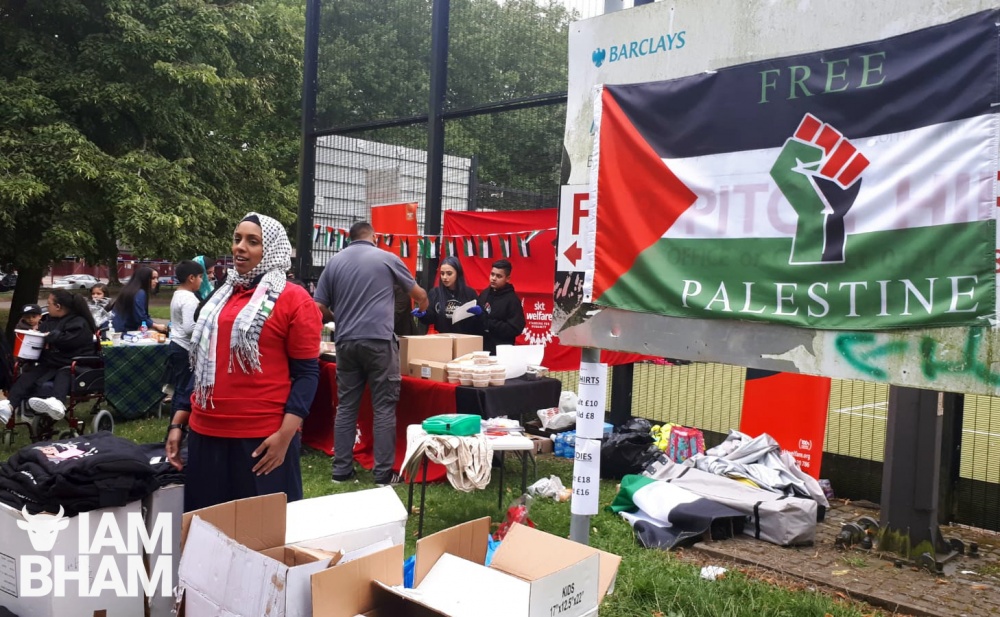 A family fun day has been held in Aston Park to raise money for children in the Palestinian territories, namely the West Bank.

The free outdoor event brought together local residents from the Aston area for an afternoon of sporting activities, henna painting, refreshments and a bouncing castle for the little ones.

Organised by community volunteers in partnership with charity SKT Welfare, the fun day provided a host of exciting activities to keep attendees busy on a warm Tuesday (19 August) during the summer holidays, including a seven-a-side football tournament organised by volunteers

Collection buckets were being shaken all day as donations came in from members of the local community, many contributing by way of purchasing a ‘Free Palestine’ themed t-shirt or indulging in some home-made ‘street food’, from Samoas and Chaat to Biryani and Pizza.

The volunteers gathered with the aim of fundraising to assist children and families following a wave of conflict lasting 11 days earlier this year.

The event managed to raise £1684, through the support of volunteers and local businesses, funds which the charity says will be used to provide food for orphans and desalination plants for water, “as 97% of the water in Gaza is currently undrinkable”.

Spokesperson for SKT Welfare, Sabiya Hussain, said: “Events like these bring communities together and allow businesses to get involved in a great cause and sponsorships also allow all the money raised to go directly to the cause.”

“We had lots of people asking when the next event would be as they wanted to get involved so there is definitely a demand for more now that the lockdown measures have been lifted. People have missed gatherings and events but they are also eager to show their support for those less fortunate around the world.

“We hope this event gives others in the Birmingham community the motivation to come together. “

In May, more than 300 people were injured after Israeli police stormed into East Jerusalem’s al-Aqsa mosque during the holy month of Ramadan. In response, Palestinian militant group Hamas fired hundreds of rockets towards Israel, the Government of which then retaliated by attacking the Gaza Strip with tanks and air strikes.

As news of the incursions spread, protest marches supporting peace were held across the world, including in Birmingham and London. The violence came to a brief end after a ceasefire was agreed by both sides.

More recently, however, Israeli gunfire on Saturday (August 21) wounded 24 Palestinians as they demonstrated against an Israeli blockade, including a 13-year-old boy who was shot in the head, according to health officials, as Palestinian protesters threw stones and burned tires during a demonstration along the border with Israel.

According the SKT Welfare website, money raised for their Palestine campaign will help go towards rebuilding basic infrastructure in the occupied region and providing vital supplies.

“95% of Gaza’s water is ‘unfit for human use’. With the water supply often being contaminated, our Palestinian brothers and sisters go days without receiving clean water!

“By supporting our Palestine charity, we can produce up to 80,000 litres of clean water which lasts two days for almost a quarter of a million impoverished Palestinians.

“With hundreds being injured daily the situation in Palestine is critical. Medical aid is urgently needed to treat our Palestinian brothers and sisters!”