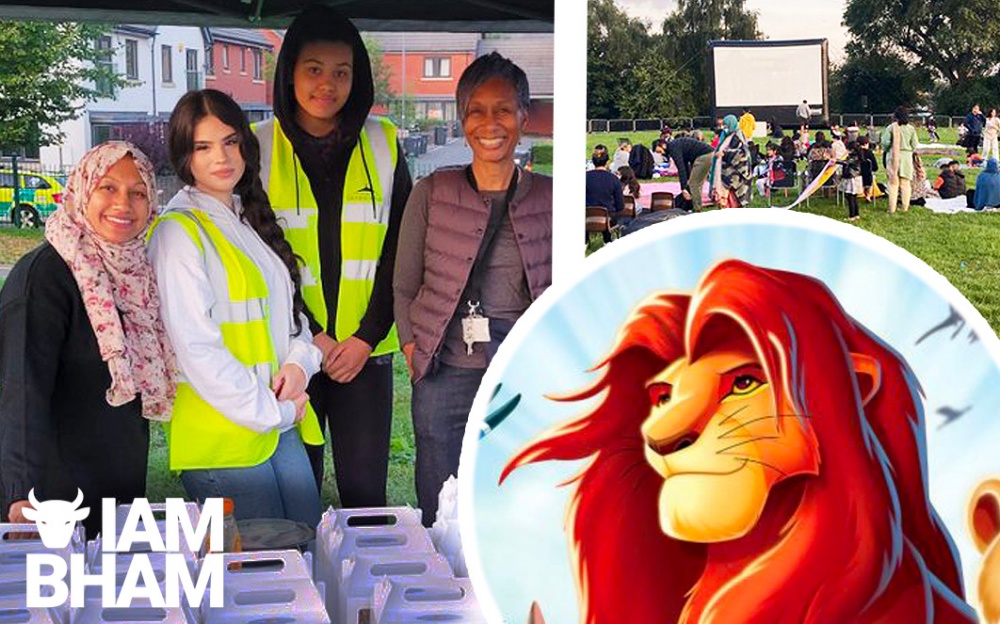 Residents in Handsworth and Lozells were treated to a free outdoor cinema experience yesterday when The Lion King was shown on the big screen at Georges Park.

Hundreds of families and friends packed the park grounds as the 1994 animated Disney classic – starring the voice talents of Matthew Broderick, James Earl Jones and Jeremy Irons – was projected onto a large inflatable screen yesterday evening.

As the sun began to set over the city, over 400 film fans from the community attended the free but ticketed event following an afternoon of creative children’s activities at the location.

With group picnics set up and spectators seated on mats and chairs over the park’s grassy fields, the 1 hour and 27 minute long cinematic feature was the highlight of the day for many, capturing the imaginations of hundreds of parents and children who were turned up.

Organised by Friends of Georges Park with the help of Flatpack Film Festival and Birmingham City Council, the summer Bank Holiday weekend event was the first time an open air screening has been held in the public park.

For many visitors to the recreation area, the vibe was something new and exciting for often overlooked communities. Writing online, community network worker Dee expressed her delight at the experience.

“The Lion King in Georges Park, Lozells, a fabulous time had by everyone, such a joy to see families watching, singing and happy as they enjoyed the film Well done George’s Park! This is what I love about the Lozells community, such warmth, togetherness and welcoming!”

Birmingham Lozells councillor Waseem Zaffar (Lab) attended the screening with members of his family. Sharing his thoughts on the occasion, he told I Am Birmingham:

“To see 400 folk, young and old, and we had some very, very young there and I also some of the elderly there too. I was sat next to someone who came from across the city, she saw the advert and decided she wanted to come across and experience the open air cinema because she’s never done so, so it was absolutely fascinating.

“These sorts of events are really important but particularly important after the rough 18 months we’ve had under the pandemic and the sacrifices that people have made, the loved ones we’ve lost, so it was brilliant to see the community out enjoying themselves together.”

Zaffar also praised the event organisers for their passion and commitment to the local area.

“They work hard, they’re very focused on improving the park and providing services for the local community in the park; they’re talented, they’re creative, they’re energetic, they’re very inclusive so they’re fantastic. I love working with them, I love supporting them and I will continue to support them!”

The Lion King is a 1994 American animated musical drama film from Walt Disney Pictures and directed by Roger Allers and Rob Minkoff.

The film tells the story of Simba (Swahili for lion), a young lion who is to succeed his father, Mufasa, as King of the Pride Lands; however, after Simba’s paternal uncle Scar murders Mufasa, Simba is manipulated into thinking he was responsible and flees into exile.

After growing up in the company of the carefree outcasts Timon and Pumbaa, Simba receives valuable perspective from his childhood friend, Nala, and his shaman, Rafiki, before returning to challenge Scar to end his tyranny and take his place in the Circle of Life as the rightful King.

The Lion King was originally released on June 15, 1994, to critical acclaim; grossing $763 million worldwide and completing its theatrical run as the highest-grossing film of 1that year. It is also the highest-grossing traditionally animated film of all time, as well as the best-selling film on home video, having sold over 30 million VHS tapes.

The Disney hit garnered two Academy Awards for its achievement in music and the Golden Globe Award for Best Motion Picture – Musical or Comedy.

In 2016, the film was selected for preservation in the United States National Film Registry by the Library of Congress as being “culturally, historically, or aesthetically significant”; and, as of December 2019, it is the only Disney film to have ever been dubbed in Zulu, the only African language aside from Arabic to have been used for a feature-length Disney dub.