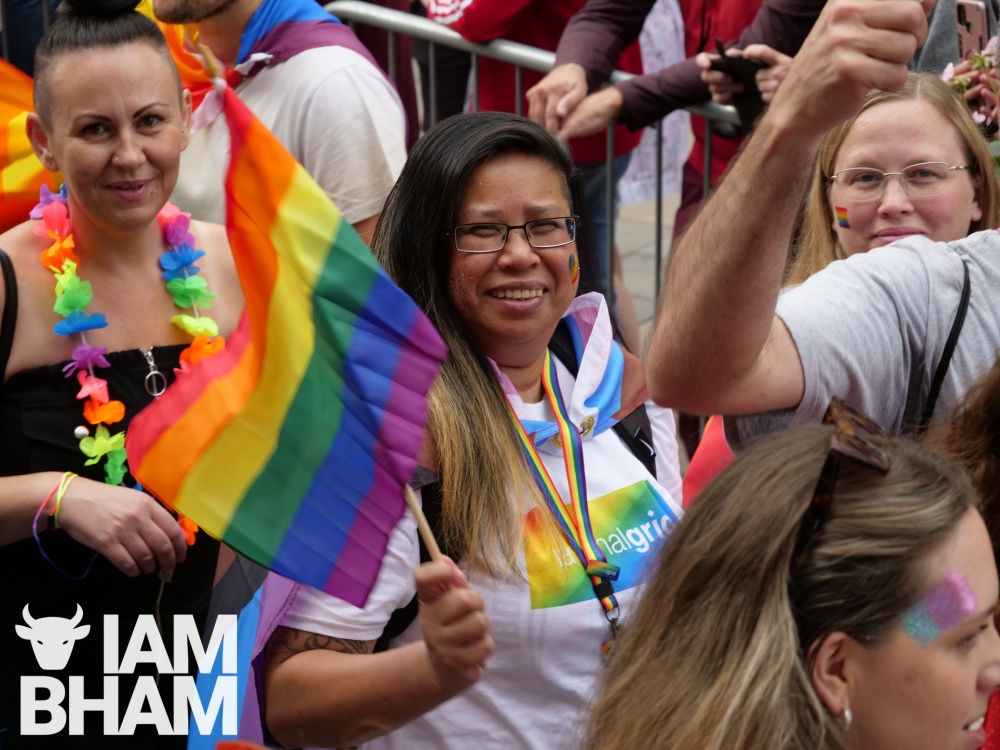 Thousands of people have taken to the streets to celebrate the return of Birmingham Pride this weekend, after the event was twice postponed due to the COVID pandemic.

Following a hiatus of 28 long months since its last live event, the LGBTQIA+ festival launched with a spectacular parade starting in Victoria Square before making its way to the Gay Village in the city’s Southside district.

Usually held in May, the UK’s largest two-day Pride celebration was moved to September to ensure greater health and safety measures following easing of the most recent national lockdown.

This year’s festivities have been billed as the largest in the event’s 24-year history as organisers have taken over Birmingham’s Smithfield site, the former home of the city’s Wholesale Markets.

Pride-goers have a host of music and showbiz glamour to enjoy this year, with a Main Stage and Cabaret Stage at ‘Smithfield Live’ along with a large dance arena. Within the street party area, there’ s a Future Stage inside Nightingale Club, a Community Stage and the Eden Stage.

In a bit to make the event more accessible and inclusive, several free community spaces have also been made available which don’t require paid wristbands or passes, and local venues are additionally hosting sober spaces.

At Birmingham New Street Station, arts & crafts activities are being held for members of the public to participate in, including face painting, community stalls and entertainment and meet and greets with celebrity drag artists including Victoria Scone and Ellie Diamond.

Saima Razzaq, Birmingham Pride’s new head of diversity and inclusion, told the BBC: “This is so exciting. We’re stood on the grounds where the wholesale markets were.

“And for the first event in Birmingham to be held here, for it to be Birmingham Pride, is again another historic moment. It’s fantastic.

“This Pride this year is probably the most inclusive and diverse Pride that we’ve ever had in Birmingham, might I say in the UK.”

Over 20,000 people reportedly lined the streets and took part in the parade as charity and community organisations joined businesses, sports clubs and student groups to march together.

Taking in New Street and High Street, before passing by the Bullring and Grand Central via Smallbrook Queensway, the parade featured an array of floats, dancers, walkers, mascots and a sea of inclusive rainbow flags.

“I remember back in summer 2019 we had this and obviously that was over two years ago so it really is more incredible than ever to be back for this big event and obviously the statement of togetherness, inclusivity, diversity, so it’s not just about hte LGBT community, it’s about all communities across the West Midlands being included in the reopening, the renaissance of this place”, he told I Am Birmingham.

“I have to say an incredible thank you and well done to the organisers. They were confident they could pull this off when they rescheduled it to the end of September, a lot of people said ‘No, it won’t happen’, but to the Pride team, well done, you were right, the doubters were wrong.”

Human rights activist Peter Tatchell, a staunch campaigner for LGBTQ+ equality and long-time supporter of Birmingham Pride, lent his backing to the celebrations but was critical of a police presence at event.

During the parade, he confronted Chief Constable of West Midlands Police Dave Thompson who was marching with Police Crime Commissioner Simon Foster and officers from the force.

“It’s great that West Midlands Police were at Birmingham Pride but also it’s very long overdue that they apologise for their past persecution of the LGBT+ community. In the decades prior to the full decriminalisation of male homosexuality in England in 2033, thousands of gay and bisexual men in the West Midlands were arrested by the police, many were imprisoned, some were beaten up in prison, others were fined huge sums which caused them economic hardships,” he told I Am Birmingham.

“They all got a criminal conviction which resulted in many of them losing their jobs, their homes, their marriages and suffering in some cases mob violence at the place where they lived.

“I appeal to the Chief Constable of the West Midlands to make amends for past wrongs. It is time there was a public apology. The the LGBT+ community deserves it and it would help draw a line under the past persecution so we can move on together united.”

Organisers of the event have used the time the event was on a break to reflect on changes to the structure of Birmingham Pride and how this reflects those it serves in a diverse and ever-changing city.

“They are the future leaders, they are essentially the future of Pride.”

Birmingham Pride is taking place on Saturday 25 and Sunday 26 September.