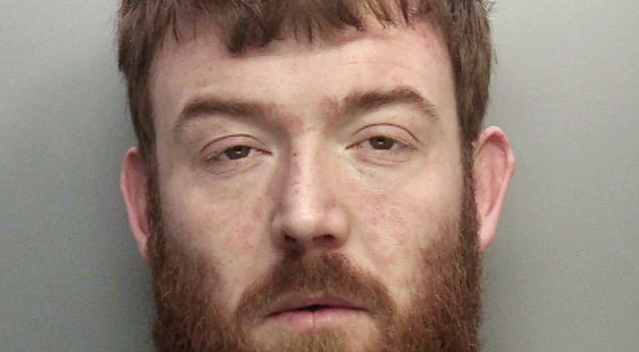 Rory Farrell jailed after he repeatedly assaulted and stabbed his ex-partner in a brutal campaign of violence (Photo: WMP)

This story contains details of domestic abuse and photos of injuries.

A domestic abuser from Birmingham who repeatedly bullied, assaulted and stabbed his ex-partner has been jailed for 13 years after police uncovered a catalogue of violent attacks which left his poor victim physically and psychologically scarred.

Rory Farrell, 30, subjected the woman to a sadistic and disturbing campaign of torment and abuse during the initial COVID lockdown.

Rory Farrell,who lived in a Birmingham flat with the victim, lashed out at the young woman on numerous occasions having accused her, without any evidence whatsoever, of cheating with other men.

The 30-year-old thug was said to have become jealous and “obsessed” with his partner, continually checking her phone and social media accounts, and his aggressive scrutiny effectively rendered her prisoner in her own Birmingham flat.

Her life became blighted by constant threats and raging assaults from Farrell.

On one terrifying occasion Farrell took his sadism to a new level when he dangerously dangled the 20-year-old victim out of a first floor window by her ankles and callously shouted “bye” as he threatened to drop the petrified woman.

A neighbour found the poor victim in a distressed state outside her flat on 8th May 2020 with two black eyes and blood seeping through plasters on multiple cuts.

An ambulance was immediately called and police arrested Farrell later that day and he was placed in custody.

Doctors carried out a medical inspection of Farrell’s poor victim and discovered a shocking list of injuries which included numerous bruises and a total of nine knife slash wounds upon the woman’s body.

The poor victim had tried to treat these cuts herself rather than going to see a doctor due to fear of what Farrell might do to her. She is said to have lived in daily terror of the brutal beatings that Farrell subjected her to.

Police officers from the Public Protection Unit (PPU), who are specially trained to support domestic abuse survivors, supported the woman through the investigation.

The victim was able to disclose a series of violent assaults suffered at the hands of Rory Farrell. These violent and sadistic attacks started in February 2020 when Farrell hurled a glass jar at her head just days after his prison release.

Speaking about the victim’s horrific ordeal, Detective Inspector Andy Bridgewater from PPU, said: “Farrell became obsessed with her and her life. He convinced himself she had been seeing other men while he was in jail and that paranoia often ended in violence.

“The woman tried reassuring him nothing had happened but in desperation told him he was right in a bid to stop the beatings.”

DI Bridgewater ensured his staff provided specialist support for the traumatised victim once the crimes of her abuser had been logged with police.

He said: “It must have been an awful situation to be in. My staff worked tirelessly to secure evidence that helped convict Farrell, while guiding the woman carefully through the process.

“We kept her safe and put her in touch with charities who could help her start to rebuild her life.”

Officers charged Farrell with wounding and, though he at first denied the accusations, the thug eventually went on to admit the offences on the first day of his trial at Birmingham Crown Court.

On Thursday 30th September Rory Farrell was found guilty and jailed for 13 years for his violent attacks.

Anyone who has experienced domestic violence can contact Respect for help and advice.