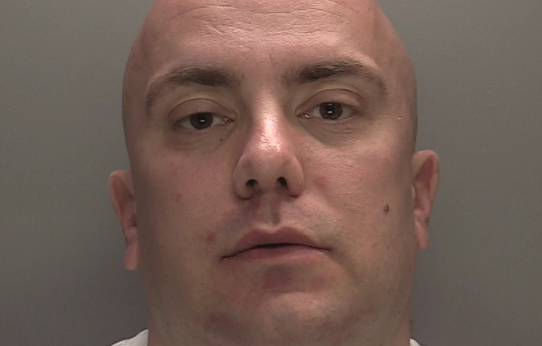 PC James Ankrett has been sacked following a misconduct hearing into his relationship with a vulnerable woman (Photo: WMP)

A disgraced West Midlands Police officer was sacked yesterday (14th Oct) for abusing his position of trust after engaging in a sexual relationship with a domestic abuse victim during the course of his duties.

James Ankrett, 40, admitted corrupt or other improper exercise of police powers after forming an inappropriate relationship with the vulnerable victim who was placed under his care in July 2017. Officers who pose a danger to women will be “rooted out and prosecuted” according to a police statement.

Ankrett, who is a force response officer, was restricted from duties when his relationship was discovered and given a non-public facing role following the serious incident. Instead of helping the woman – who had suffered domestic abuse – Ankrett breached his powers and quickly escalated the relationship with the victim until it became sexual.

At the misconduct hearing, which took place at police headquarters in Birmingham, the abuse of power by Ankrett was described as “harmful” and concerns were raised about the lack of trust and care afforded to the victim by the corrupt officer.

He was suspended from duty after appearing at Wolverhampton Crown Court last month and an accelerated misconduct hearing was convened for Thursday 14th October where he was dismissed without notice.

Discussing Ankrett’s disturbing abuse of power and referencing the current public debate around violence against women, Chief Constable Dave Thompson – who chaired the misconduct panel – said: “This behaviour is a matter of deep public concern at this time.

“The issue of Violence Against Women and Girls requires the police to act as champions for the fair treatment of women.

“Public trust is undermined when officers behave as this officer has.”

He added: “Officers like this have no place in West Midlands Police. They are an abhorrence to the men and women who make up this organisation who go out day in day out to protect the most vulnerable. They damage our standing and professional reputation.

“We will root them out and not only dismiss them but actively seek prosecutions when criminal laws have been broken.”

Ankrett, who did not appear at the misconduct hearing, will be sentenced at Wolverhampton Crown Court on a date to be confirmed.